11 0
I do believe that the bitcoin will survive as it suddenly came into limelight and covered a lot of markets. Many people become rich by trading bitcoins and if you monitor the prices of a bitcoin every week people are earning anonymous profits.
Have a look at people's views regarding the future of bitcoin at - ****

But it's a quite obvious thing that in this modern era of technology things like cryptocurrencies will survive, as everything is getting online, so, why not bitcoin.
Last edited by a moderator: Yesterday at 12:18 PM

13,989 1,440
While cryptos are mostly bought/sold for speculative purposes I think the future of it is bleak.
However if Joe Public can be persuaded to pay for everyday purchases with it then it has a future.
A

11 0
However, as every week bitcoin is measuring a sudden rise in its value and sometimes a sudden fall. So, if we see the graph I don't think so that it's going to be dead.

100 5
BTC might not have a future but stablecoins will. China just announced there be issuing yuan backed DCEP coin.

39 1
Earlier, bitcoin remained out of sight of large investment funds, as their shareholders are interested in activities exclusively in the regulated field. This significantly limited the prospects for bitcoin and its distribution, because the cryptocurrency market existed almost simultaneously with the traditional stock market, without any overlap.

Bitcoin has already experienced a serious drop in value in 2017 and this has dealt a significant blow to the industry. But much more importantly, this is the launch of bitcoin bonds. In fact, bitcoins received real value not only in a very limited circle of representatives of the crypto industry, but real support and a kind of recognition. Now Bitcoin may well begin to be of interest to investors and asset managers in the traditional segment.

As a result, I think that the future of Bitcoin is cloudless and it's gradually transforming from an exotic asset into a generally accepted investment tool, which will make it more stable and reliable for investments, although it will reduce profitability.
H

538 39
Bitcoin is alive only because of pumps. They are just done at the right moment, so they can be associated with some fundamental events what will in turn justify "true" interest to the crypto market. It's all about manipulations, you know

39 1
The main danger for bitcoin price is the gossips about bitcoin ban. However, prohibiting bitcoin is simply useless, since its code will be rewritten faster than the ban will taken in action. Even a well-coordinated legal attack by the UN and the WTO is likely to lead to the fact that Bitcoin will "go" underground and will develop in confidence. Bitcoin is likely to be smuggled, as happened with drugs. So far, cryptocurrencies attract the attention of many people mainly due to their profitability. It will take time for people to be inspired by cryptoeconomics goals, prospects and ideas, and stop chasing only profit, starting to look narrowly at the ecosystem and its disruptive perspectives. This trend is one of the key growth factors. Most people who have heard something about cryptocurrencies know only about the huge profits, but, as the cryptoeconomics penetrate into increasing number of areas,this will expand interest, including from famous and well-known individuals and organizations. So I am sure that bitcoin perfect will be perfect.

momo3HC said:
Hi. Let`s talk about bitcoin and it`s future. What are you thinking?
Click to expand...

I'm thinking you were asleep and missed the bottom.

I'm thinking you're doing the same thing again - Nov 22 low. Get some coffee and use a STOP. Then stop talking and DO!

Alice D Shealey said:
No one can predict actually, as suddenly bitcoins came into limelight no one knew that people will make such anonymous profit through bitcoin.

So, basically no one can tell what exactly the scenario is going to be.
Click to expand...

Best to just stay in doors and lock all doors and windows and just use central air to breathe. Don't open the door for even the mailman. When Bitcoin hits the next bull high, come out and call your broker and buy the top and ride the downwave like a champ all the way to another bottom ................ and then tell all your friends, "I told you so, don't trust Bitcoin"
M

momo3HC said:
Hi. Let`s talk about bitcoin and it`s future. What are you thinking?
Click to expand...

fibo_trader said:
I'm thinking you were asleep and missed the bottom.

I'm thinking you're doing the same thing again - Nov 22 low. Get some coffee and use a STOP. Then stop talking and DO!
Click to expand...

And i`m thinking you`re missing the point for this thread! So don`t get so instructive and keep a good tone.

There appears to be a breakout on 1H, but its still under my buy stop of 7,200. There is no other confirmation to go LONG.
Even the indicators are not responding to my "go Bitty, go" 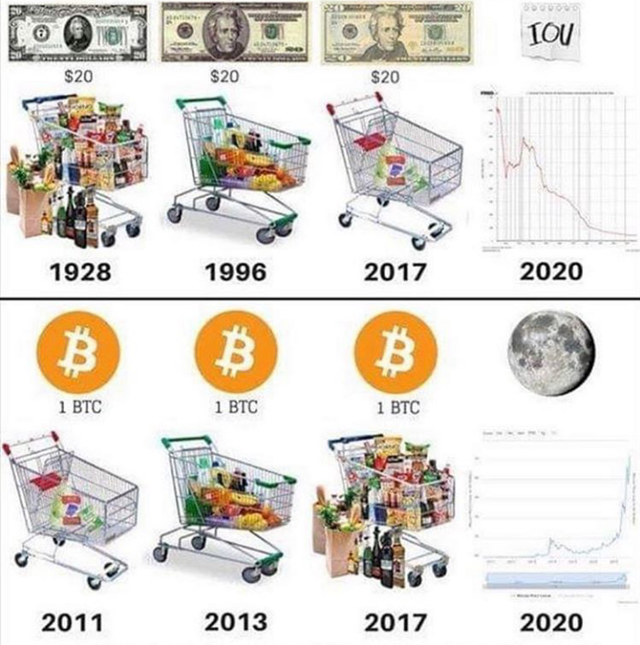 
A Bitcoin trader walks into a bar, orders a whiskey, pays the bartender one bitcoin and says, "By this time tomorrow it might be worth a million bucks!"

The bartender pours him a glass of water and says, "By this time tomorrow it might be Scotch."
Reactions: Rufus_Leakey
You must log in or register to reply here.