The DarwinIA lottery demo portfolio supported by the Hall of Fame

1,594 2,063
You have to consider performance and management fees so you need some free cash.
You could reduce the allocation unit to 480 .
Reactions: IlIlIlIlI

CavaliereVerde said:
You have to consider performance and management fees so you need some free cash.
Click to expand...

Management fee will be deducted from the sales of every month.
Performance fee will be taken when selling the allocation and after 3 months.
Fees cut the amounts of the new allocations.
It is planned to allocate about the full amount left, divided by 10 as new share size after the monthly sell tracations.
After a bad month or because of these fees that could also be less than 500.
Share sizes must not be stable for all months, I will continue to use my excel for the documentation so that I know easier which amount is to sell.

The other 4 Darwins made a total gross profit of 186.70 USD until end of August with their active previous allocations since April 2021 (allocations ending end of August 2021 are not included):

Profit calculated is in USD and not in EUR, but I didn't change that setting for the excel as it is just a working sheet.
Same is with allocations on the demo portfolio, $500 per share, so percentage data are true.
Last edited: Sep 4, 2021
Reactions: CavaliereVerde

34 31
How much negative divergence do you usually tolerate before selling a Darwin?
Reactions: IlIlIlIlI

morehastelessspeed said:
How much negative divergence do you usually tolerate before selling a Darwin?
Click to expand...

Currently the only rule to sell a Darwin is after 6 month when the notional allocation of the DarwinIA prize is removed, after a Darwin had won a prize.
The DarwinIA eligibily criteria exclude Darwins with a divergence worse than -0.4 when the competition results are final. That could be a lucky snapshot.
So - currently - I would tolerate any divergence as long as the Darwin is in the portfolio, as a real investor I would not. There my tolerance values would be -0.3 or -0.5 depending on the return rate.
Last edited: Sep 30, 2021
Reactions: CavaliereVerde

34 31
Thanks. I am trying to find rational criteria to define an in-portfolio threshold.
The last Darwin I sold into profit purely because of consistently increasing negative divergence (NWO after 6 months) was already cancellling more than half (55%) of it's return rate in the portfolio.
The most negatively divergent one I currently hold into profit is cancelling 11% of its return rate after 14 months.
So, I feel the optimal tolerance threshold must be somewhere in between, but I have not settled it yet.

morehastelessspeed said:
The last Darwin I sold into profit purely because of consistently increasing negative divergence (NWO after 6 months) was already cancellling more than half (55%) of it's return rate in the portfolio.
Click to expand...

I hope you sold it before August 17th this year.

This young demo portfolio currently shows a positive divergence over all Darwins ...

IlIlIlIlI said:
I hope you sold it before August 17th this year.
Click to expand...

637 595
There are three public lists available related to this portfolio:
1) the current composition
2) last Darwins bought from DarwinIA selection
3) Darwins to sell end of the month, which is after 6 months when the DarwinIA allocation runs out
Maintenance of these lists will be done shortly after finishing the portfolio transactions.
Last edited: Sep 16, 2021
Reactions: trilobite and CavaliereVerde

637 595
September is finished with a small drawdown in this portfolio.

A share of $ 500 will be sold by these Darwins as the DarwinIA allocation of the March contest is running out now.
The gross profit of the last six months shows that 80% will get a payment from the notional allocation.

AUX and ZTY will leave the portfolio as there was no other allocation made in the last 6 months (including the September contest). I did not check whether these two Darwins should have received money from the first payment after three months.

Unfortunately the sales ended with a small loss which cuts the investment possibility for the September allocation.

For September there was $ 25.43 management fee paid which is deducted daily from the portfolio balance:

There appear 4 new Darwins in the portfolio from the September allocation: BOT, CBV, FFV and ULC, and six well known ones.

JTL cannot be bought currently as the transaction is blocked at the moment. So I will try it tomorrow again.
This is the current order list:

The public lists linked in my last post above are updated after the September transactions.

I expected some dilution in the first 6 months after the initial portfolio setup as it cannot show the DarwinIA history up to 6 months ago.

Edit:
JTL could be bought now:

for these Darwins where shares could be sold with profit:

637 595
This is the October composition of the portfolio after the September transactions, sorted by open P/L: 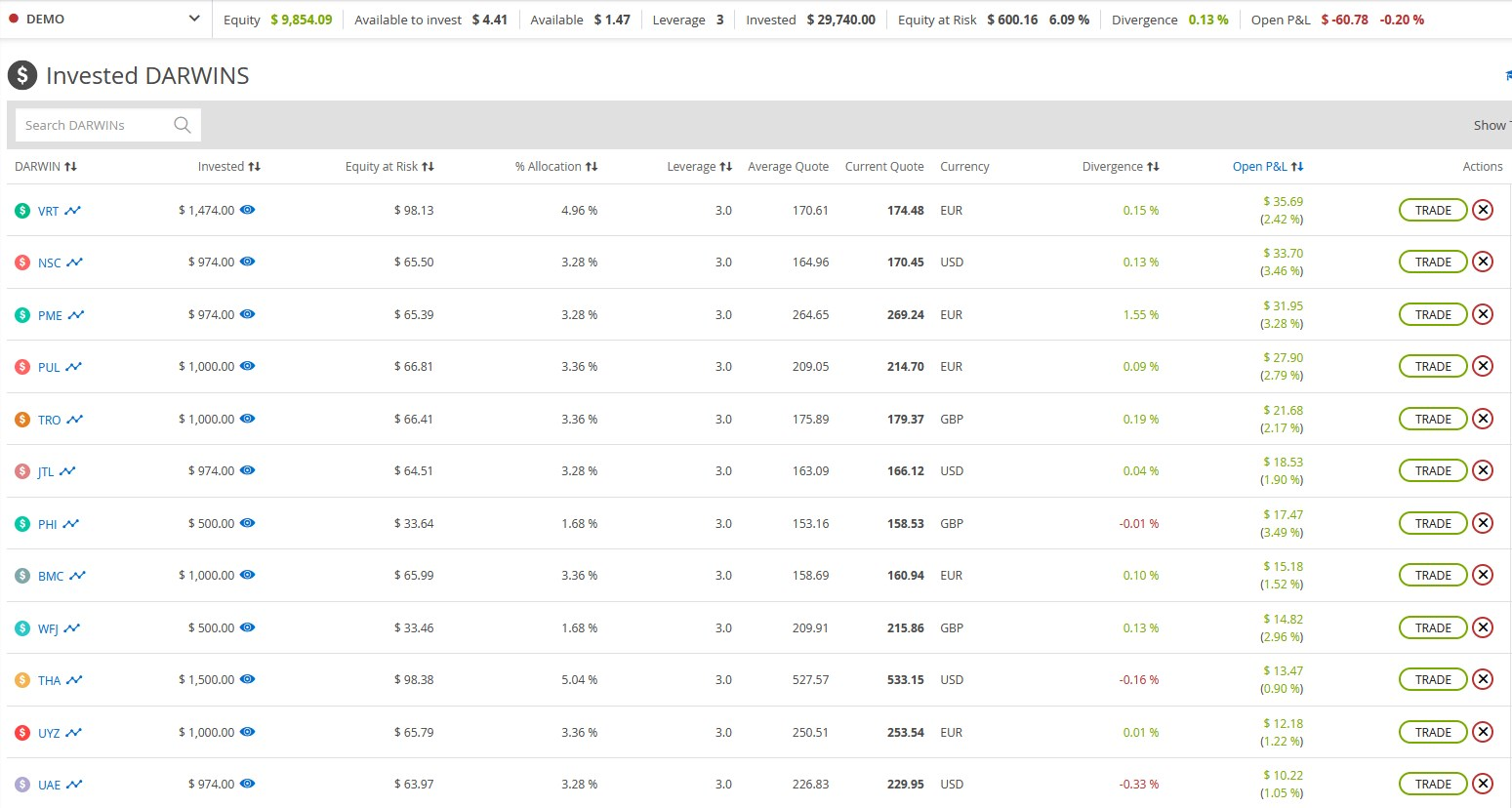 There are 42 Darwins in the portfolio.
Last edited: Oct 1, 2021
Reactions: Captain Currency, CavaliereVerde and Pulse07

637 595
October ended with a smal DD on equity, which was produced on Friday after the protfolio showed small profit also on Thursday.

The allocation from May will be sold for these Darwins:

Seven out of ten Darwins made profit over the last 6 months period.
HEO, NWO and WFJ are leaving the portfolio now.

Seven of these Darwins could be sold with profit:

The small loss of September could be compensated so the portfolio now shows an overall profit of 16.50 on closed positions.

After selling the ended allocations, the portfolio now has $ 5,054.73 available for new investments. But the new shares will be bought for $ 500 each as there are more than $ 100 to pay for investor fee on open positions which will be charged end of November (after 3 month) to reduce the liability end of November.

Looks like October was very different to the previous months as there are 7 new Darwins in the portfolio now:
BSX, GBI, OMJ, TMF, TYL, YGT, ZCD.

These are the new allocations from the October DarwinIA contest:

The portfolio has 45 Darwins now.

637 595
Currently the portfolio shows profit on equity after a nice move today.

These are the top 13 of open P&L since they are in the portfolio:

637 595
Even if the portfolio has to compensate losers (one is currently exceptionally losing), it looks like it comes to reliable profitability when the first payment date for the two DarwinIA payouts comes closer after 3 months:

After 3 months the portfolio has stability on payments.
After 6 months all assets were bought after the related DarwinIA allocation and the portfolio is running fully in line with the rules and DarwinIA payment dates.
Last edited: Nov 8, 2021
Reactions: CavaliereVerde
You must log in or register to reply here.

[HOWTOINVEST] Buying Darwins on a dip