589 555
I think I will not trade more today.
This is my stone age MT4 trading screen if somebody wants to know:

All tools and indicators are free of charge or selfmade.

Now back to the trades of today:
After bad behaviour and results yesterday I'm in line with my new daily profit target (about 700 EUR). 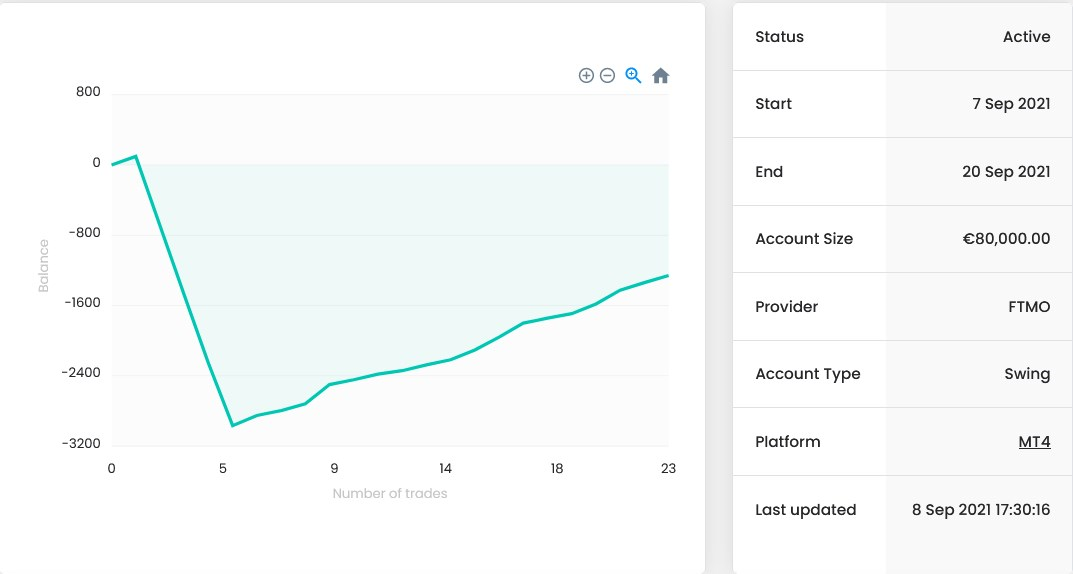 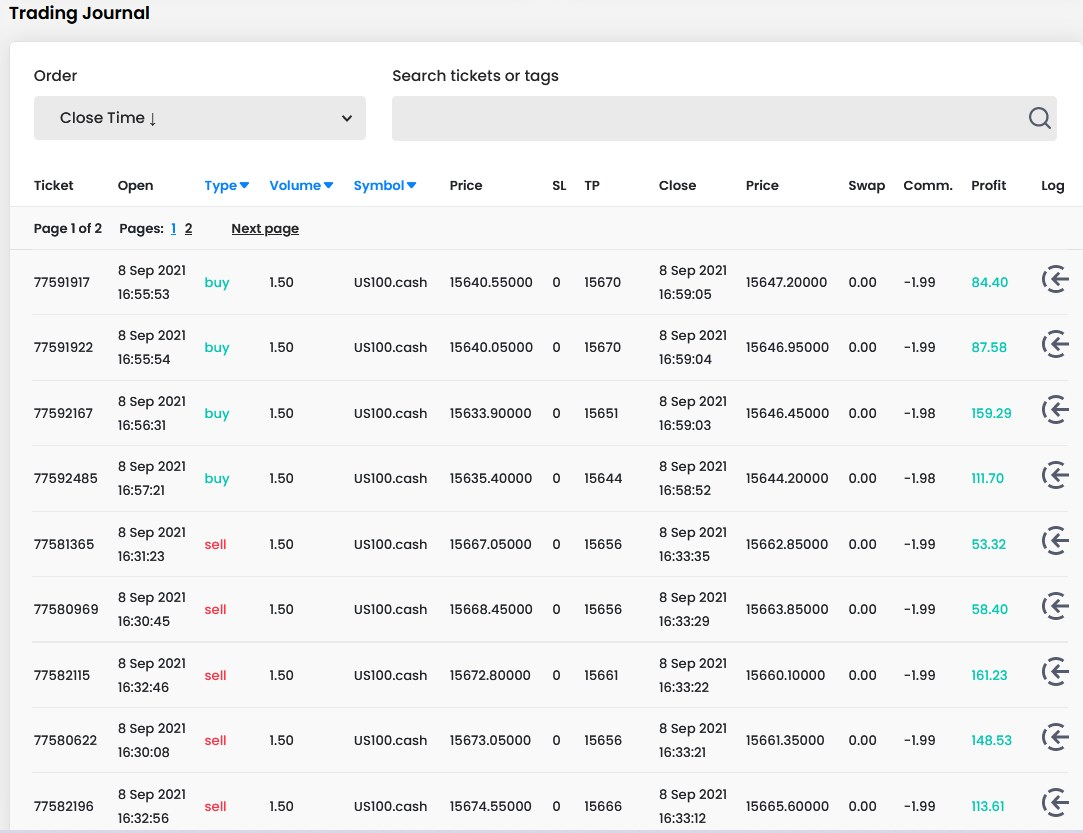 589 555
Unfortunately I violated the daily loss limit again today.
So I decided to cut the lotsize traded from 1.5 to 1.0 lots for the rest of this trial.
If I would have done that from the beginning, the account could have been managed much better as there wouldn't be a need to close positions in DD on Monday.

At the end of my trading session the account closed even and to read the profit target there are about 600 EUR needed per day of the remaining seven days.
So I could prove to recover the account in two days.
The last trade was a 30 seconds fun trade to close the days with a meaningless profit better than with a few EUR loss. 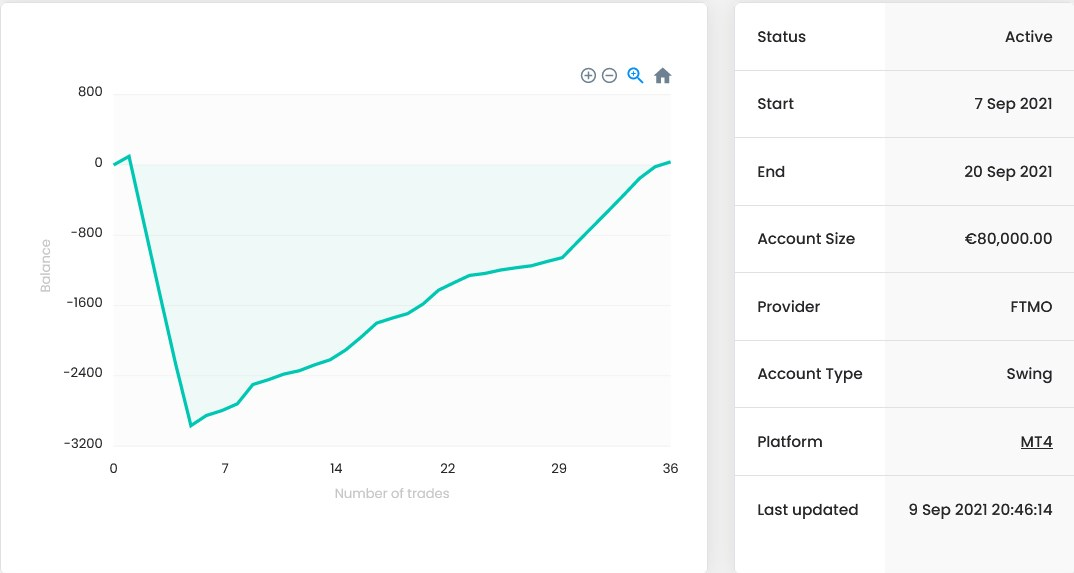 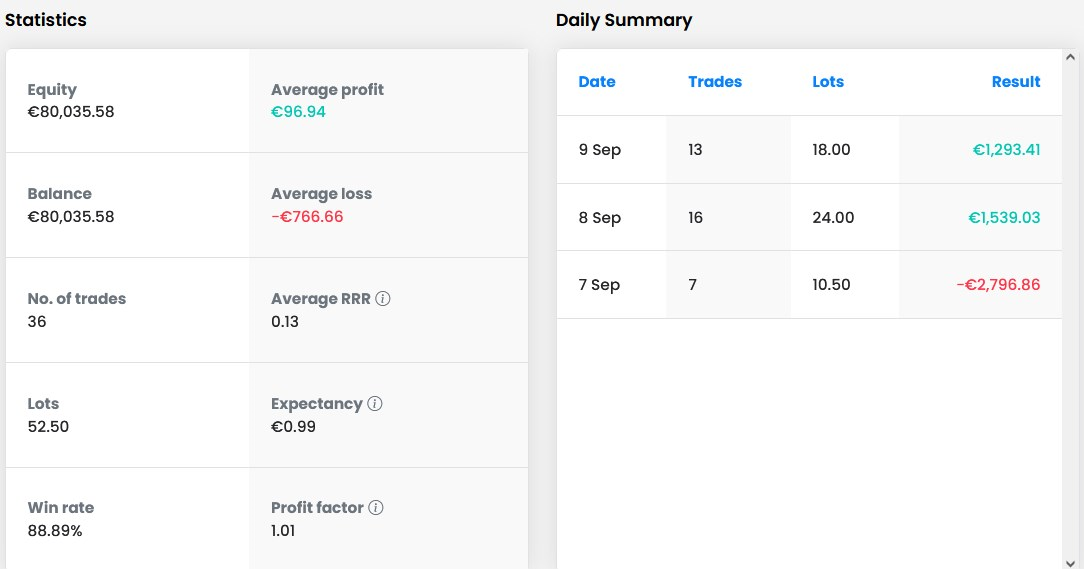 589 555
I started during the early Asian session with some mini trades where brokers might hate me for.
I exceeded the number of open trades from planned 6 to 8 to get my profit target for today.
About 50% of the profit was made by the last two trades which were entered when the market turned into my direction after the US opening.
The max. daily loss seen was about 2k so it was a very relaxed day.
There are 6 days left in this trial and 3k profit to make which should be possible without luck. 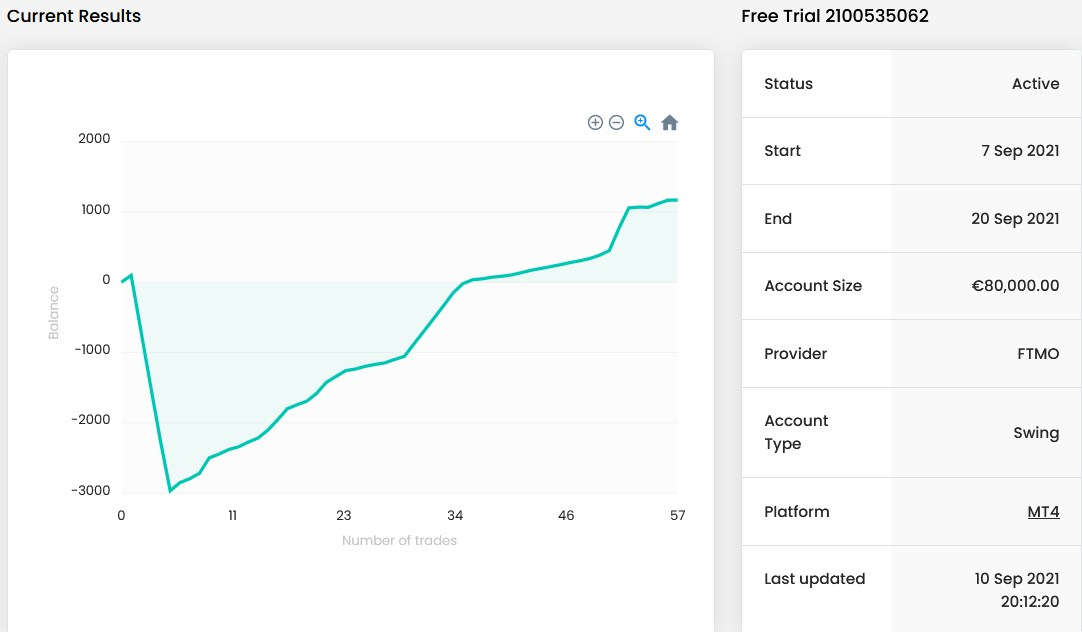 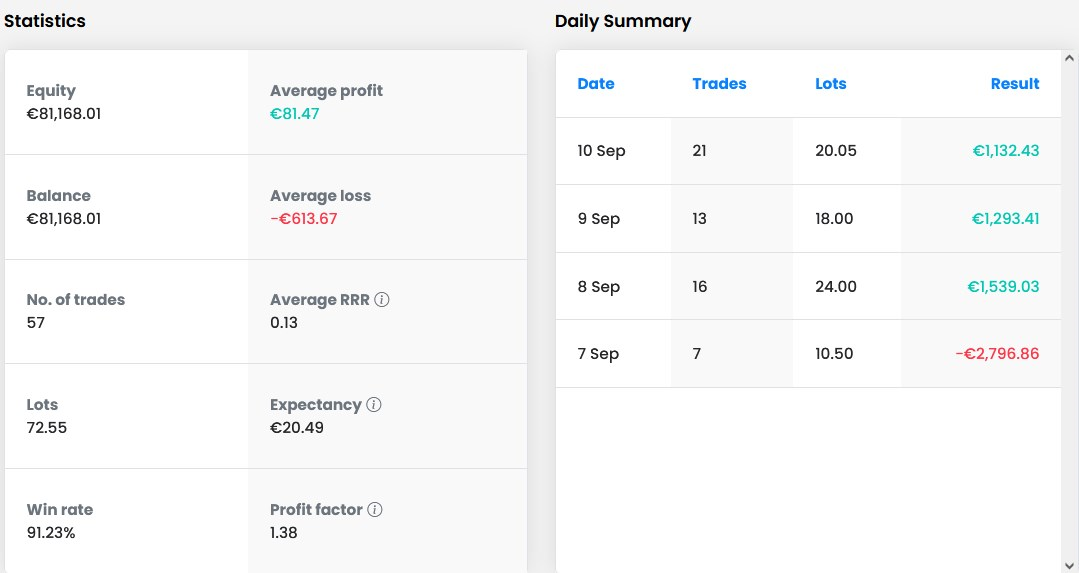 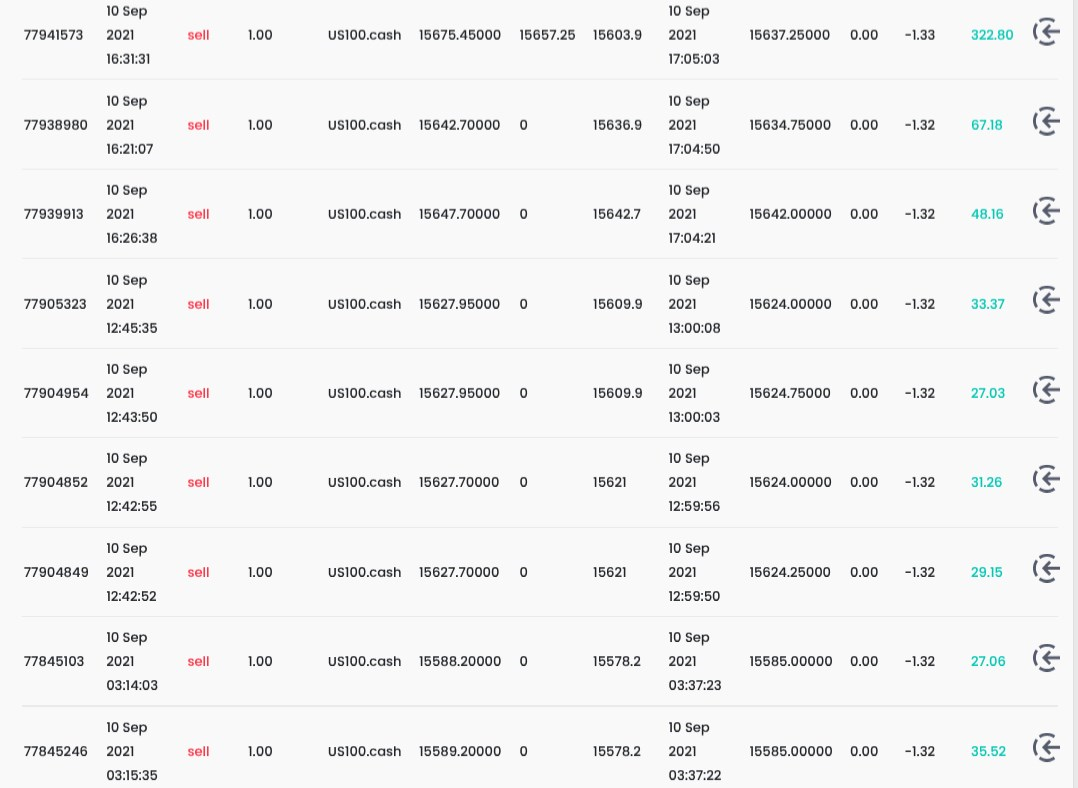 589 555
As I didn't hold my limit of 6 parallel trades with 1 lot, but traded 9 lots again, I violated the daily loss limit again on a long spike of the US market opening.
If I would have sticked to a mximum of 6 lots during this trial no limit violation would have been detected. 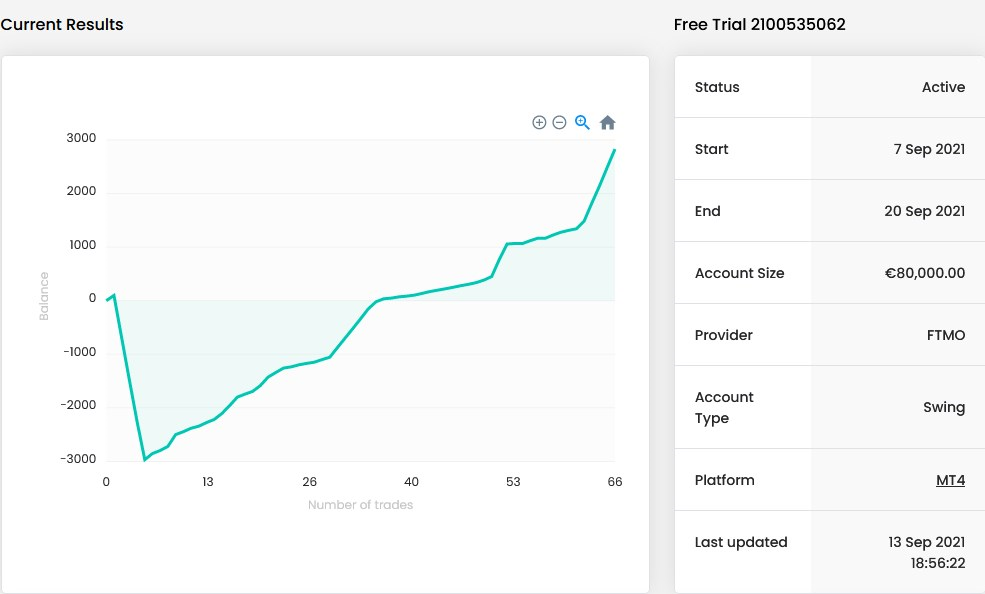 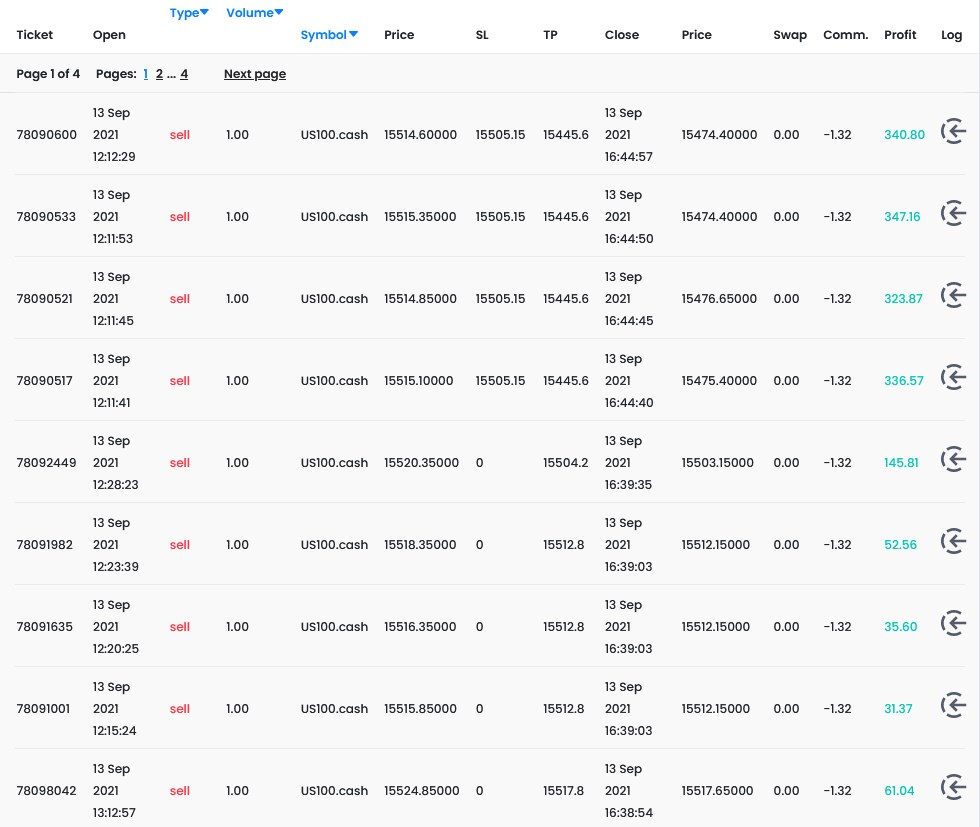 6,840 1,398
Are you trying to pass the challenge in the min 5 days?
If you planned your risk profile to reach your target in 10 -15 days, would that allow you stay within the limits?
You are so right when you're right, but seem to get spiked out at the worst possible price, just when the prices start to revert. That must be frustrating.

When the drawdown goes beyond a certain point, you feel committed to the trade, knowing that closing out would blow a couple of days work in one go.

Good luck on your next iteration.
Reactions: IlIlIlIlI
B

It's interesting reading about your experiences in FTMO, and I really appreciate both of your honest, open synopsis and discussions.

I've not looked into FTMO in depth (and I'm probably too chicken to do something like this), but what I'm keen to understand is your motivation for undertaking these challenges, and in particular whether you feel you are trying to learn or improve your trading techniques, (or whether you think it will guide you to become a better trader) because on the face of it the restrictions imposed by FTMO (garnered from reading your journals) are causing problems (eg max daily loss) so don't appear to fit with the way you would trade normally.
Reactions: IlIlIlIlI

trendie said:
Are you trying to pass the challenge in the min 5 days?
Click to expand...

Originally no, I wanted to pass it in a way I could run a challenge account with success as I don't get a new trial account before 10 days passed.
But I failed, this trial started badly.

One point I saw today is that currently I'm missing confidence to the market moves.
That should be improved.

Tonight I entered two fun trades after I published my daily results above. Then I lost patience with them and closed them manually because I couldn't set a sense making break even stop and didn't want to watch the market until it closed. The market reached the entered take profit 8 minutes later - about 3 pips above the following low - before it turned 30 pips against my direction for the rest of the day .

Depending on the point of view regarding risk all of my decisions were right.

The last 4 trades in the list above (with an sl shown) were also closed manually, besides they had a trailing stop set by my EA. That was because I wanted to end the trading session - I had enough. But it wasn't necessary - the market hit the tp about 15 minutes later. These trades were the first trades entered today - if I wouldn't have added any trades and just let them run the daily result would be about the same.
That's were I have to learn to trade better to become an FTMO trader.

589 555
Today there was only relaxed trading before the US markets opened.
The original TP was not reached until now.
All trades were closed before the CPI spike at 13:30 GMT, besides I don't read news, only charts.
Daily loss was less than 500 EUR as far as I saw it.
There are enough days left in this trial to pass the profit target. 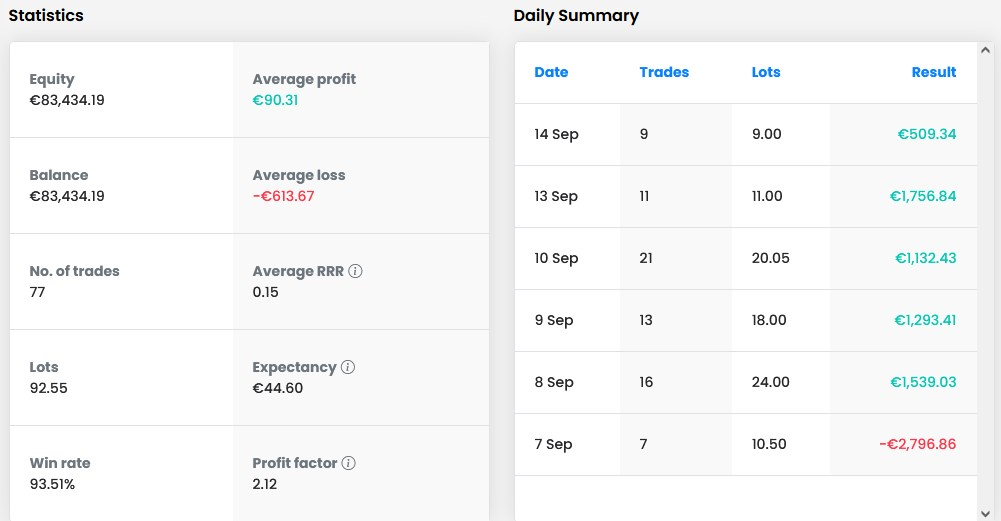 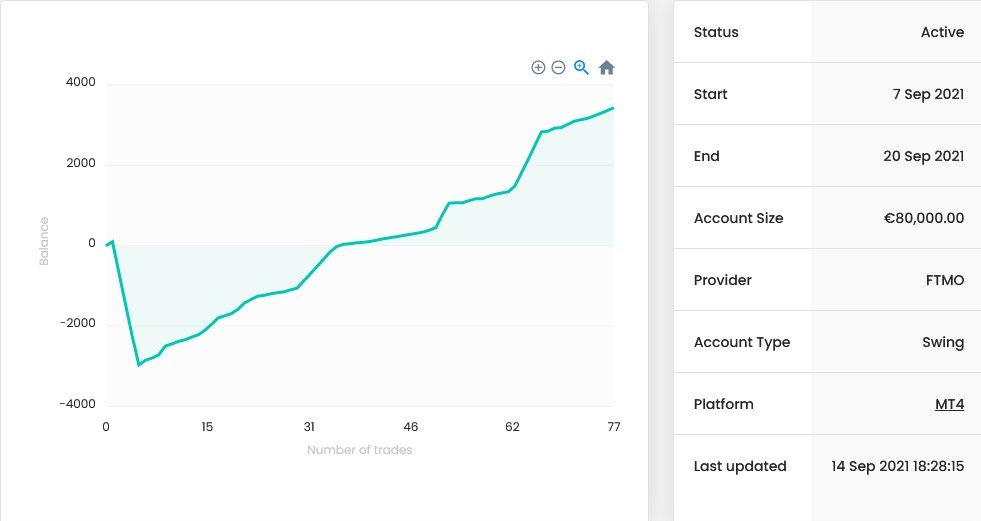 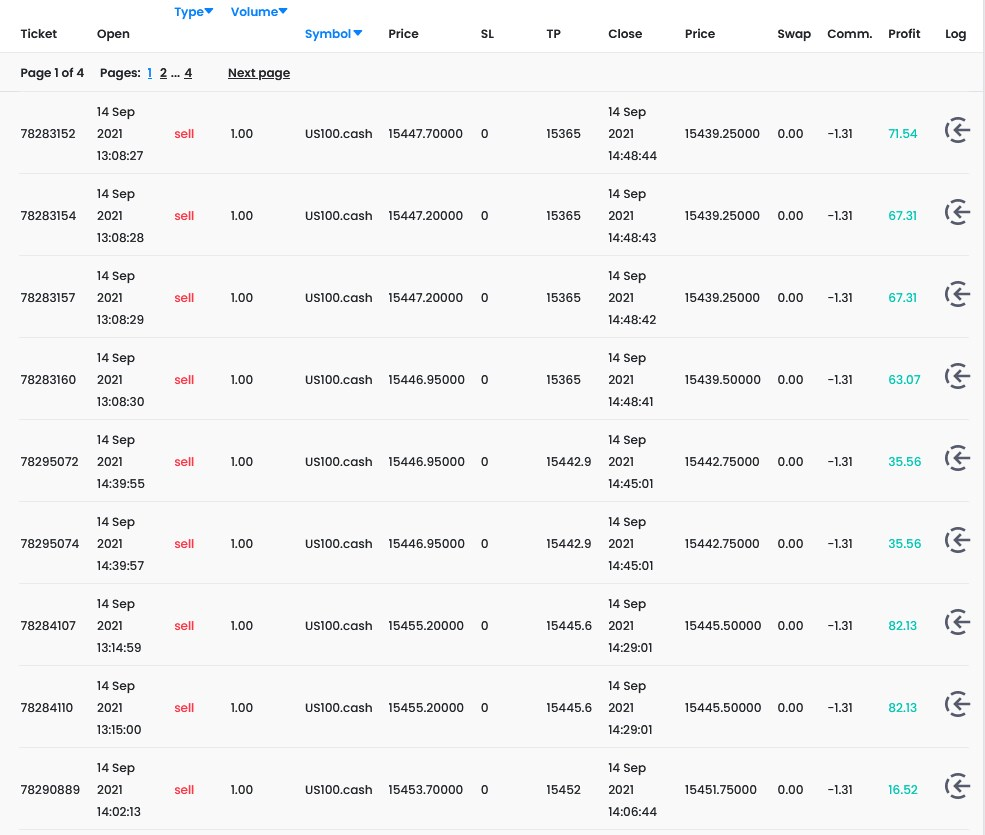 589 555
I passed the profit target of this broken trial account today.
Didn't hold the 6 lots trade size maximum again, had up to 9 lots open.
Max. DD seen was for sure less than 2k, maybe less than 1.5 k, so this was one of the better days.
I entered only long trades today, with a TP for the US market opening.
It worked. 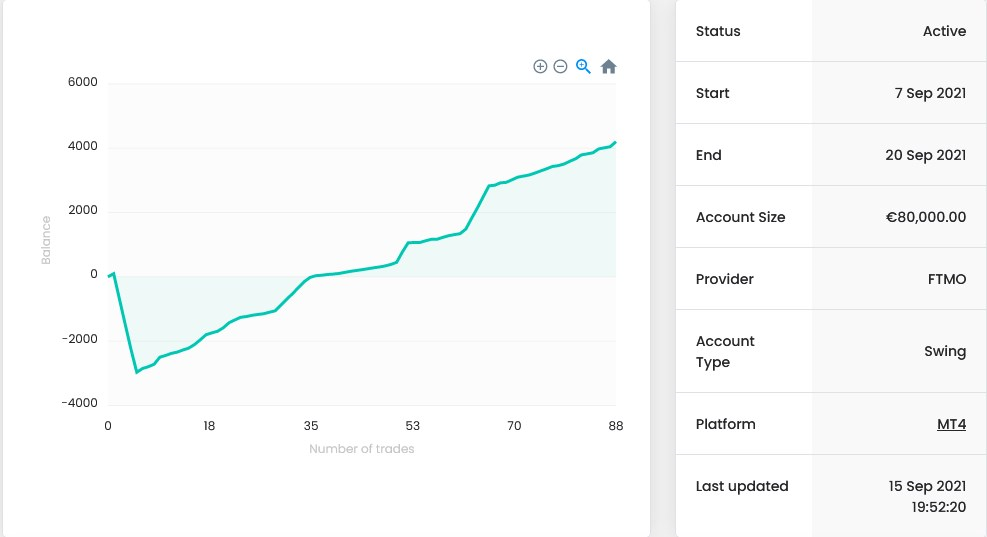 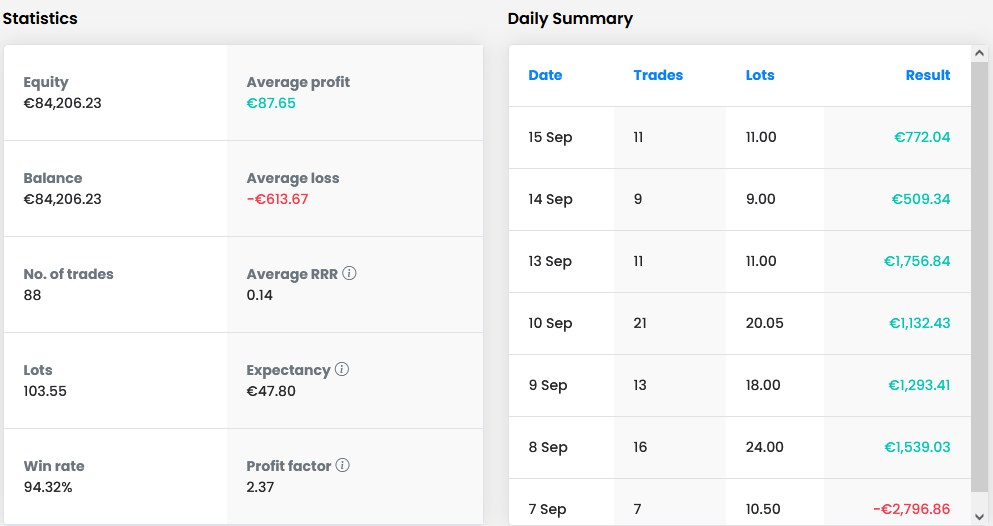 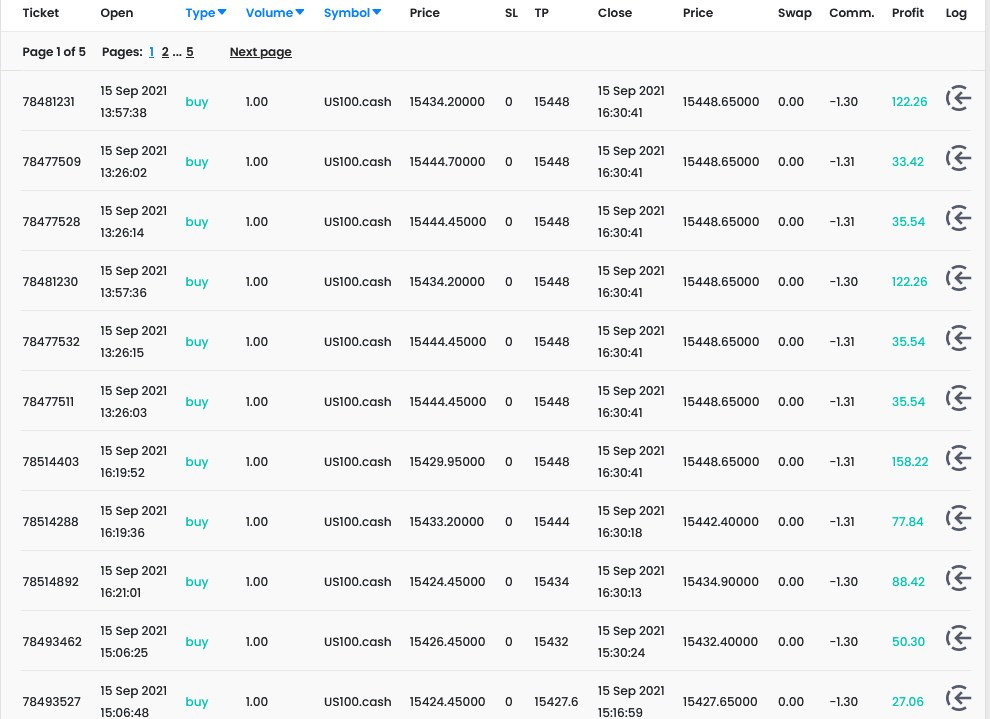 589 555
Done for today even if it COULD(!) be nice to stay short during the most time of the US session.
But - it's Thursday.
With today's high the downtrend definition - lower highs and lower lows - is broken on the daily chart of US100 at FTMO.

Started with relaxed scalping trades during lunchtime and traded the US opening with better entries than usual. 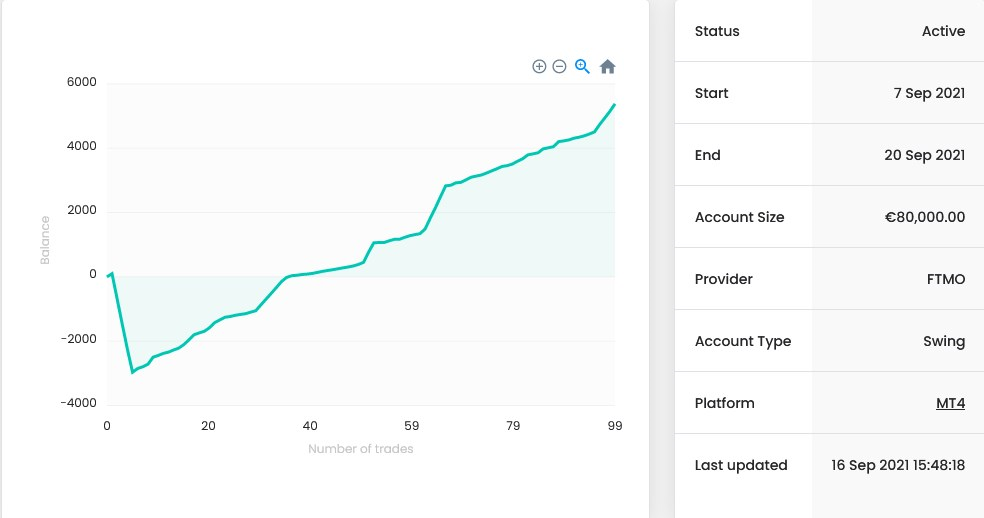 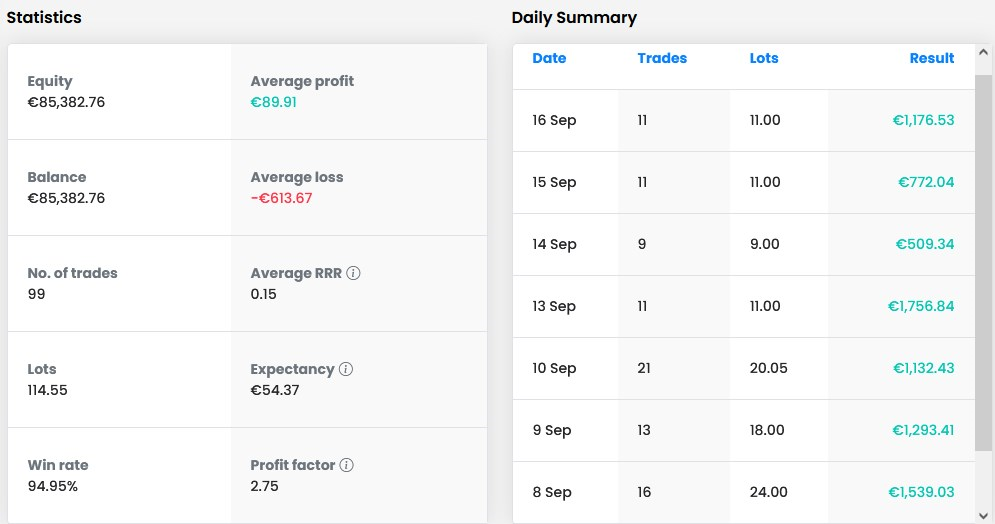 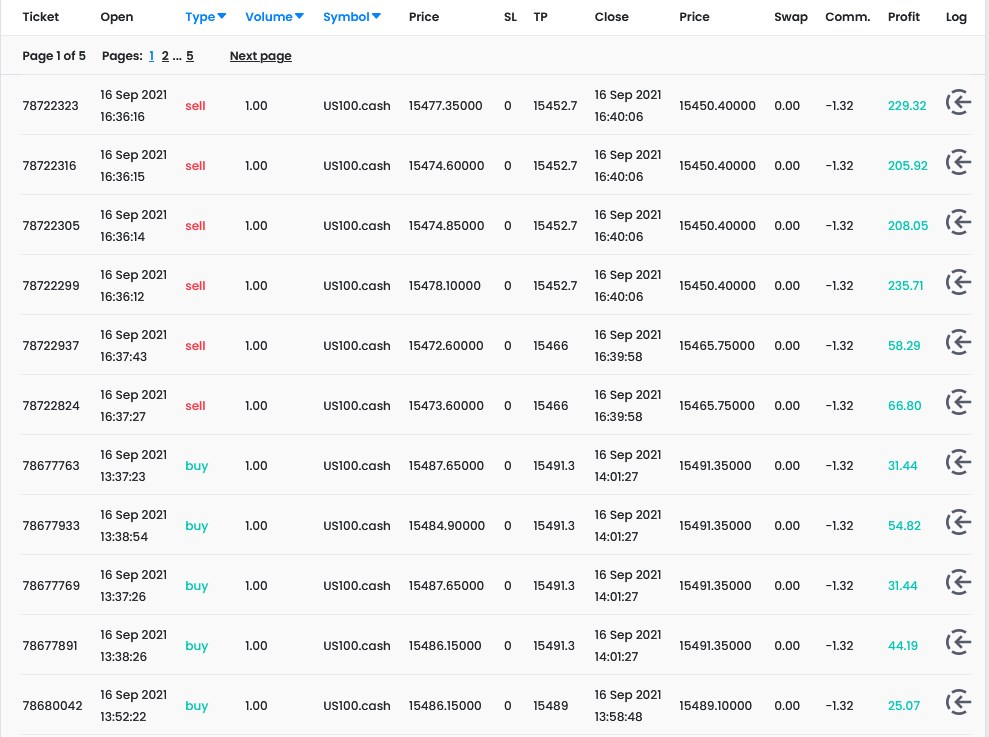 Is that smash-and-grab or drive-by?
Reactions: IlIlIlIlI

trendie said:
Is that smash-and-grab or drive-by?
Click to expand...

Maybe a mix of both as I'm working fulltime and can't watch a chart the whole day.
But every day is different.

Today: during lunchtime there is often a smaller move against the trend of the morning if there was a trend. That ends latest 2 p.m. (FTMO time) and then it's time to get out of the trade.
After the "landmine" in the second half of yesterday's US session and the falling markets this morning I was sure that the market would fall below the US opening of today. Maybe only for a minute, but good enough to place a tp order with moderate profit. The appeal of this trade was, I didn't have to do any applicable trend analysis or forecast of the session, just get out in time in case the tp wasn't reached.
Last edited: Sep 16, 2021

589 555
It's Friday - the weekend is calling
I traded only four luchtime trades via smartphone without a tp which could be closed faster than expected when the trailing stop appeared.
Today I exceeded the average daily profit traget and the overall profit target by a little bit more than 50% . 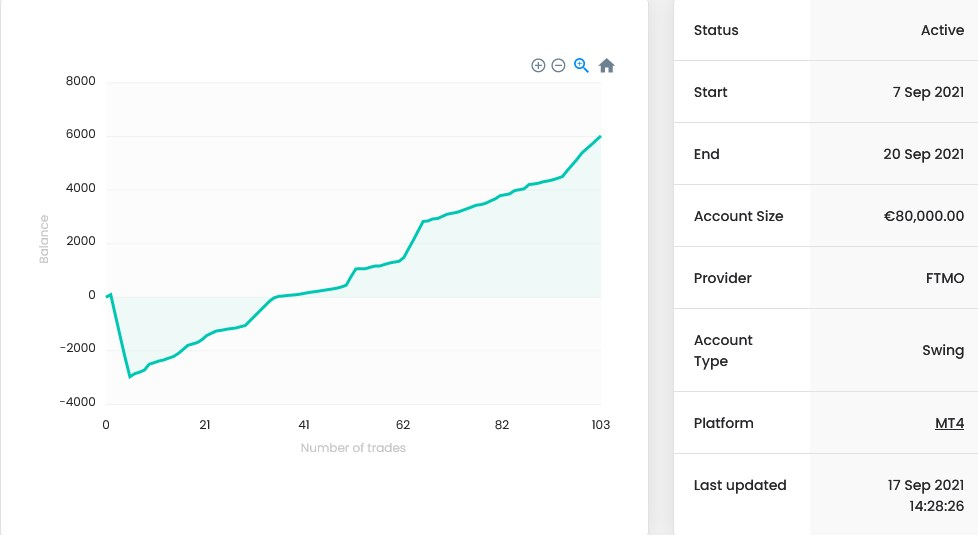 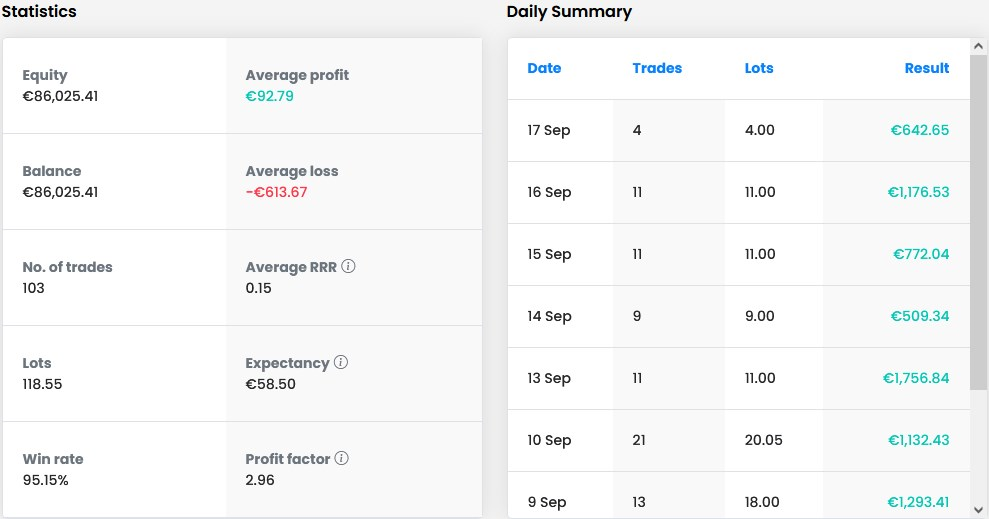 589 555
Had only one trading session today which lasted less than 45 minutes.
This trial is done, I failed the daily loss limit twice, but I got is better than the trials before.
Next one will be started tomorrow when this one has run out. 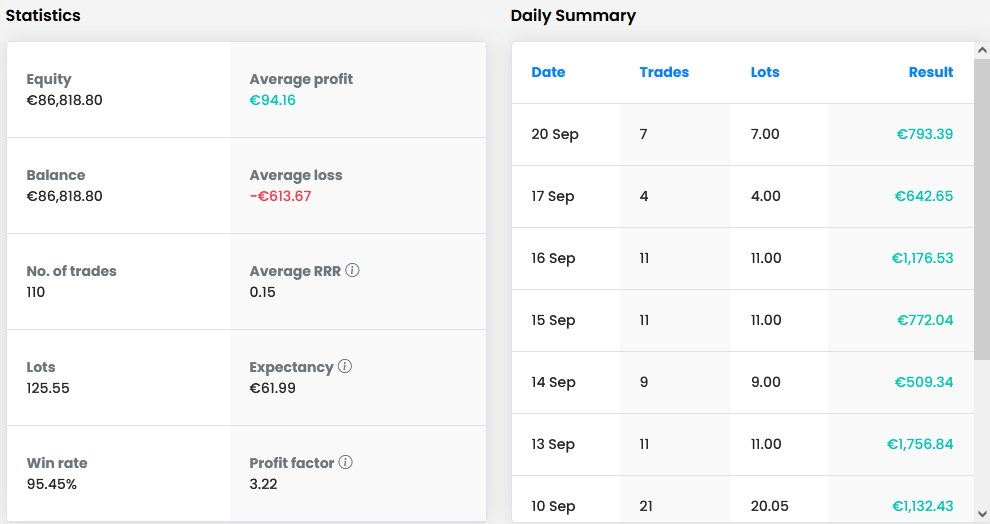 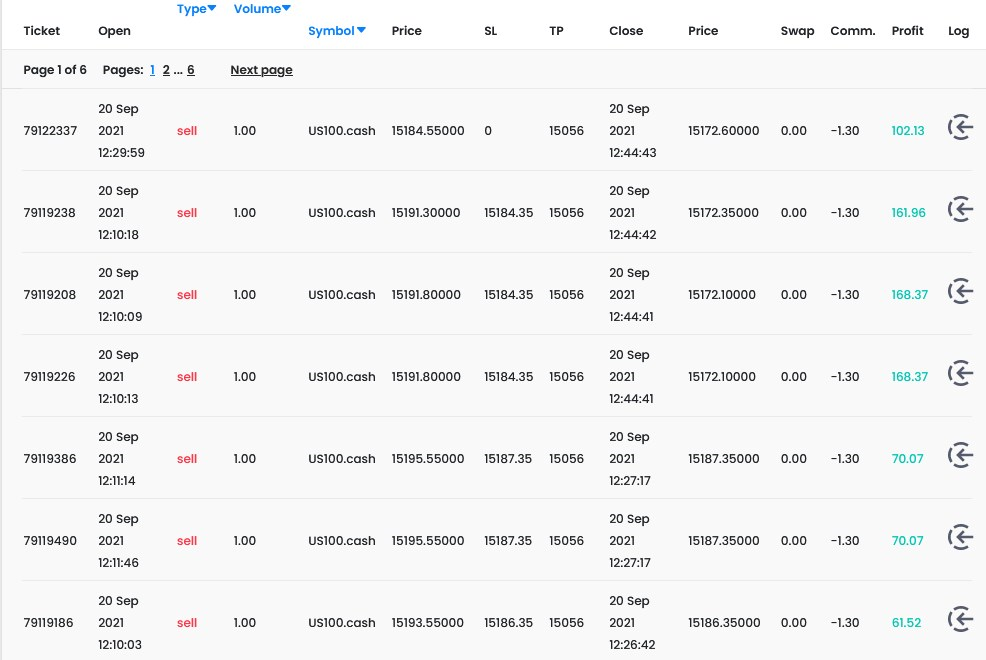 Reactions: The Erect Trader and trendie
You must log in or register to reply here.

How to work out exposure/margin

T
I believe I was scammed