686 662
First: I recommend to everybody thinking about becoming an FTMO funded trader to pass a successful trial first.

After I burned more than 5 trials by violating their rules for the following reasons:
- wrong trade size leading to overtrading
- false interpretation of the Today's permitted loss (which is always delayed and includes open positions)
- keeping high trade sizes after passing the Profit Target

So I made the following decisions for my future trials:
- take the aggressive mode for the trial which has the same rules as a 100k funded account
- use the daily balance of the demo account instead of the "Today's permitted loss"
- always use a stoploss
- try to use a break even stop as soon as possible (or when it seems to make sense)
- use my trailing stop EA (and check whether it is working properly)
- set always a take profit (currently initial 50 pips) which is extended only after setting the break even stop (and pushed only narrower for scalping or level trading)

So here is the first day of the current trial - only scalping trades were planned by Friday's market moves. 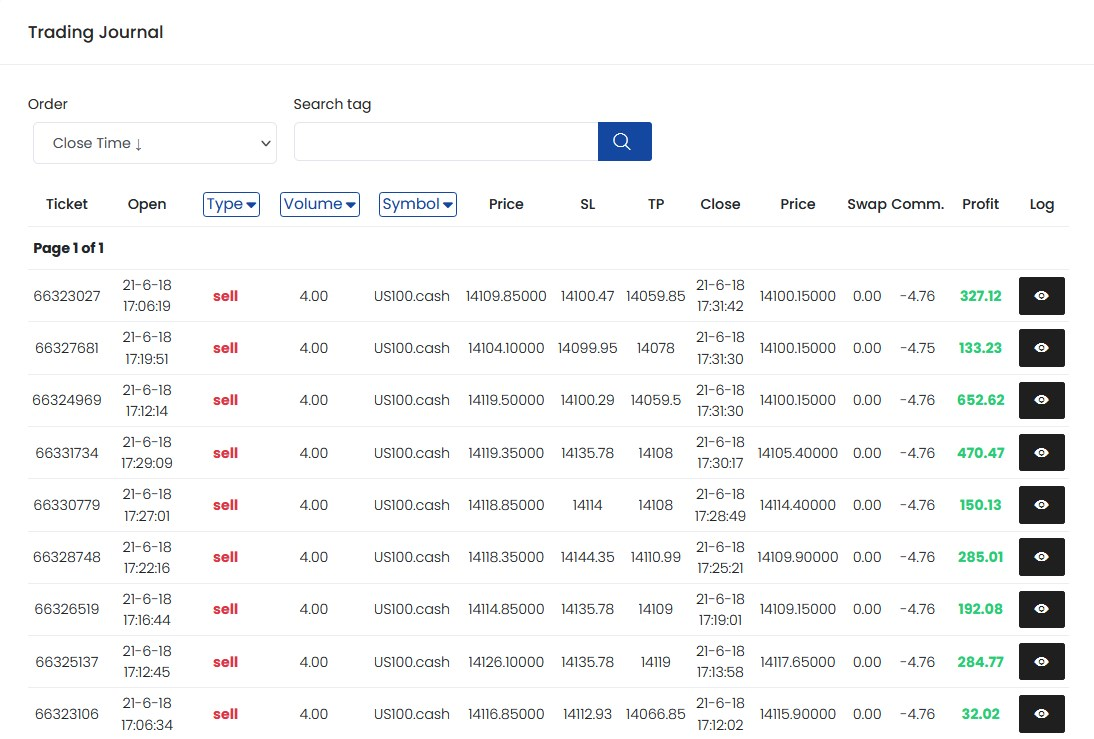 Note: The third trade (buy trade) accidentially happened when I wanted to place the fourth one but the damage was limited.

This demo account is currently the provider/master account for the reactivation of my Darwin ILR.
Last edited: Jun 19, 2021
Reactions: CavaliereVerde, Here, itstradingtime and 2 others 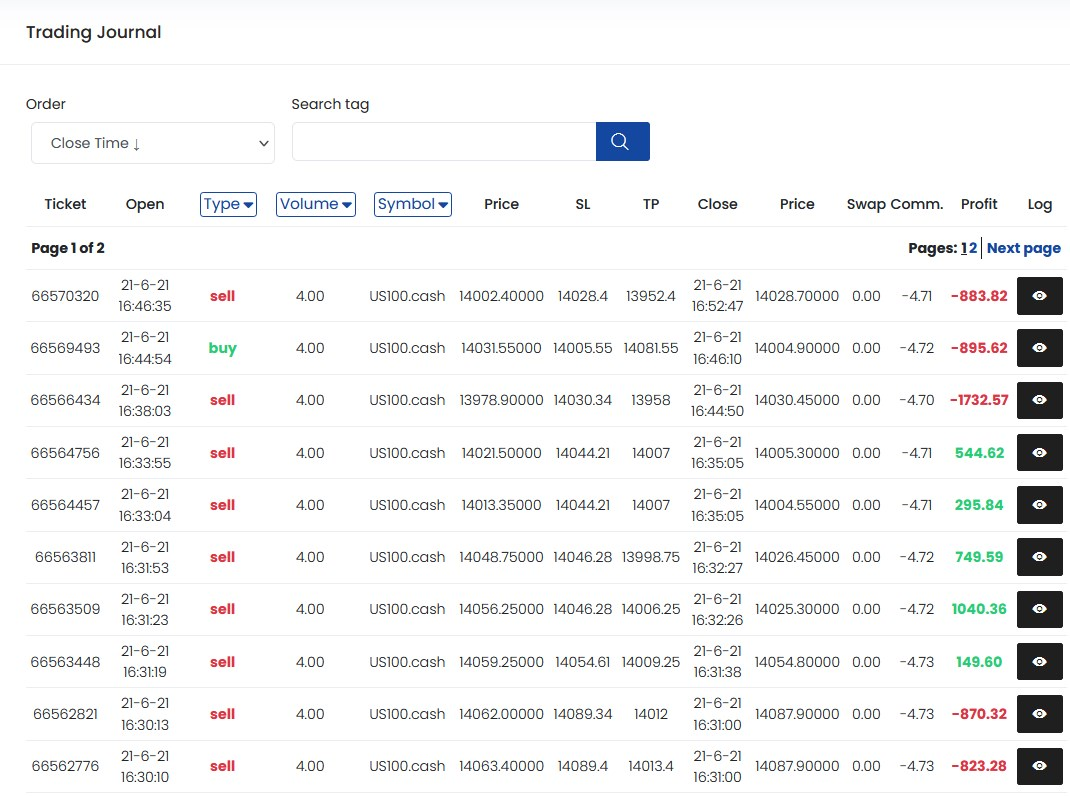 I had to stop trading as I nearly hit the daily loss limit.
The recovery trades were only made on my Darwin ILR which should be feeded only by copying the FTMO trades.

But:
I'm still in the game. (It wouldn't be a tragedy if not, I'm experienced with such situations in these trials )

I always tried to recover fully from the early losses. In the result I had too many trades.

It's very hard to trade these indices (NASDAQ, DAX) with narrow SLs (usually 26 pips), for suretoo hard during the US market opening. Faster reaction on market turns would have helped.

Challenge now: stay in the game for the other 8 days and pass all objectives.
Reactions: trendie

trendie said:
Why is your minimum trading days set to 5, instead of 10?
Click to expand...

It's the Free Trial: half time and half profit target and will never make a FTMO trader out of me, just training.
Last edited: Jun 22, 2021 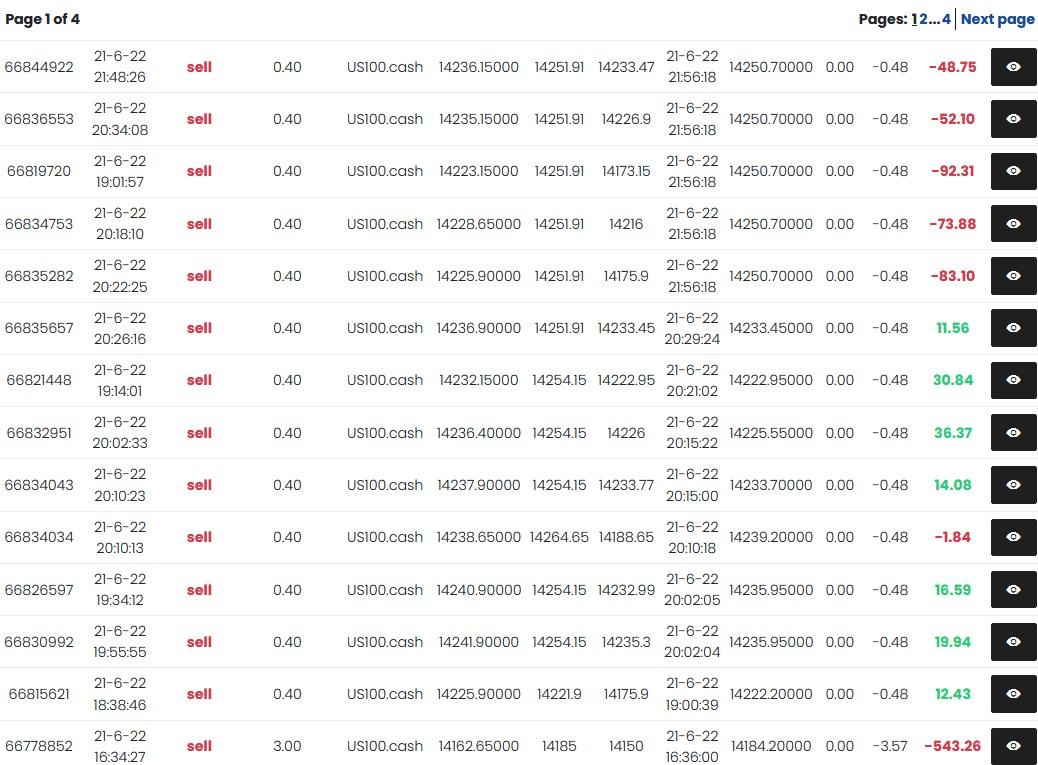 I should really think about my setups.
Stop believing and start watching better.

Now I have 7 days to make more than 10k to pass this trial challenge.
Maybe ..

686 662
As expected I couldn't hold the trading objectives and failed passing the trial.

No I have to wait some days for the next round.

IlIlIlIlI said:
As expected I couldn't hold the trading objectives and failed passing the trial.

No I have to wait some days for the next round.
View attachment 302153
Click to expand...

Isn't that the problem with trying to trade within time constraints?
You start seeing sub-standard trades because you hear the clock ticking in the background?

One of the pitfalls of trading is trading your account instead of the market.

However, I think you have an aggressive style that, on balance, wins out over time.
But you need the freedom of laxer drawdown rules than FTMO allows.

6,879 1,430
While I am in my stream of consciousness, the Challenges and Trials mean you don't have to worry about trading around news.
Personally, I am trading such that I avoid news, so my Challenge is reflective of passing a challenge and onto real accounts.

Are you doing the same? ie, NOT trading around news time?
Reactions: IlIlIlIlI

686 662
I'm not accustomed to trade with narrow stop loss so I have to play with the sizes.
Preferred style currently is scalping with bigger sizes and risking nearly the max DD in one trade set kicked me out of the max. loss limit this time.
Sizing is my biggest challenge to stay in line with the objectives, but I will continue learning.


trendie said:
Are you doing the same? ie, NOT trading around news time?
Click to expand...

As I'm mostly trading NASDAQ, news don't touch my trading.
There are no events defined for NASDAQ until now.
IMO there are also no events for the Dow and other indices.

Sometimes I trade DAX, there is one event defined when I have to take care about news. It appears seldom, but I had seen it once in their news calendar.

The really bad with the news trading rule that it also kicks you out of the funded program if you trade when a stoploss or takeprofit is triggered. So it would be recommended to remove takeprofit and stoploss before news events.
So when you are trading during news releases, there is a high risk to be trapped on the daily loss rule or a trade execution.

They meanwhile accept news trading during the challenge and the verification which means you are training or qualifying with different rules than you run the funded account:

686 662
New week, new free trial.
Unfortunately I forgot to set the aggressive mode to simulate a 100k (80k EUR) account so I have to pay much more attention to the daily loss.

Trading with half size to stay in line with the objectives easier.
Starting with an unnecessary loss, as I could have closed it with a 2 digit profit before I went to bed.

Shorting DAX in the morning (closed on the TP in less than 6 minutes) and closing my NASDAQ long trade before the US market opened as I couldn't watch it at the market opening and didn't want to start with nearly 2k losses. 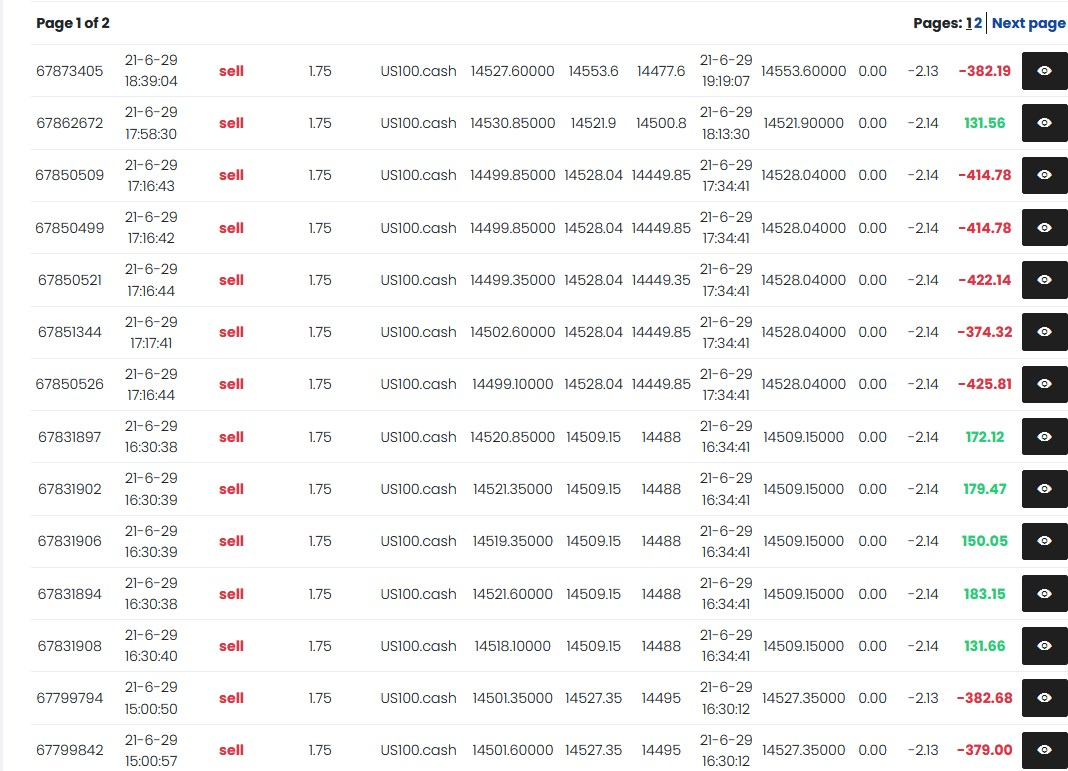 6,879 1,430
Well, that was a wilder ride than mine!
US100 seemed rangey during the morning/afternoon, then drifted up in the tail end of the day.
Hope you give it another go.
Reactions: IlIlIlIlI

trendie said:
Well, that was a wilder ride than mine!
US100 seemed rangey during the morning/afternoon, then drifted up in the tail end of the day.
Hope you give it another go.
Click to expand...

I was looking only for sell trades because the sellers were unvisible during the market opening on Monday.
That was wrong.

686 662
As today is the end of the month, the quarter and half of this year, I'm very cautious and expect everything in any direction as marketmakers, investment banks and institutional investors have to write their balances for the 3 or 6 month period with the data of today.
What I didn't and don't expexct today: reliable chart signals.
Some European banks are allowed to run their balance earlier (DAX at 17:30 Frankfurt time, 18:30 MT4 time ), but American companies usually close their balance books when the US stock markets are closing.

I recovered my FTMO account today with two relevant positions, split on several trades:
- the first 2 trades were not part of the recovery. They were closed by my self-written intraday trailing stop EA immediately because I failed to restart MT4 today. If I have time I will try to remove that bug to avoid the necessarity of this workaround.
- going long with a lunch trade on DAX expecting they will try to take yesterdays low during lunch time.
- going short on NASDAQ before the US opening and I was stopped out in profit.
- repeating the short trade on NASDAQ, adding a few cascading positions with small take profit and closing all before the US markets were open 30 minutes (could be news release time). 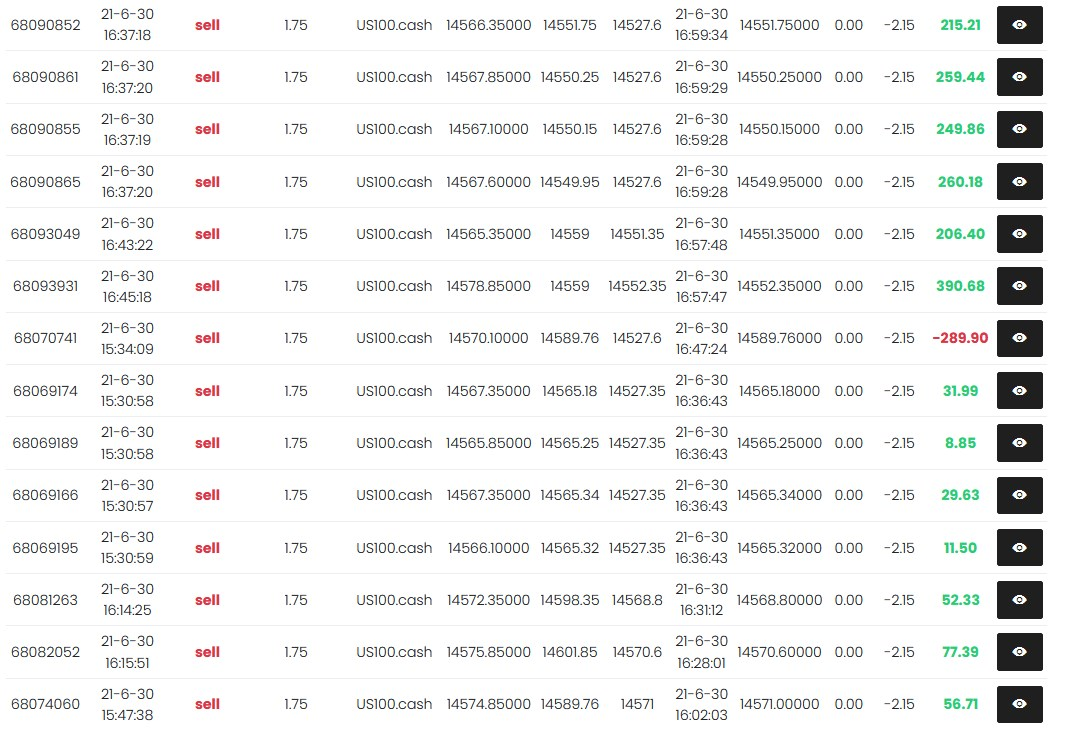 6,879 1,430
Good recovery.
Reactions: IlIlIlIlI
You must log in or register to reply here.