You are using an out of date browser. It may not display this or other websites correctly.
You should upgrade or use an alternative browser.
P

"The market" controls bitcoins price.
It's the same as every other traded stock / commodity / derivative.
Reactions: CavaliereVerde

1 0
yeah, it actually works on the "market mechanism" basis, as far as I know.
Btw, what other cryptocurrencies do you invest in, except for bitcoins?
I personally believe that cryptocurrency is now up to merge with more advanced companies. I've read that TRX is going to be a part of Daisy Ai, forming a new generation of Ai trading, which is going to be more successful than the previous one. Moreover, the example of the CEO and the founders of Daisy Ai is really inspiring. I've discovered on insiderlearningnetwork.com that Dr. Anna Becker and Dmitry Gooshchin are co-founders of Daisy Tron. The project is really promising.
It's definitely worth considering when thinking of investments in cryptocurrencies.
Last edited: Mar 22, 2021
G 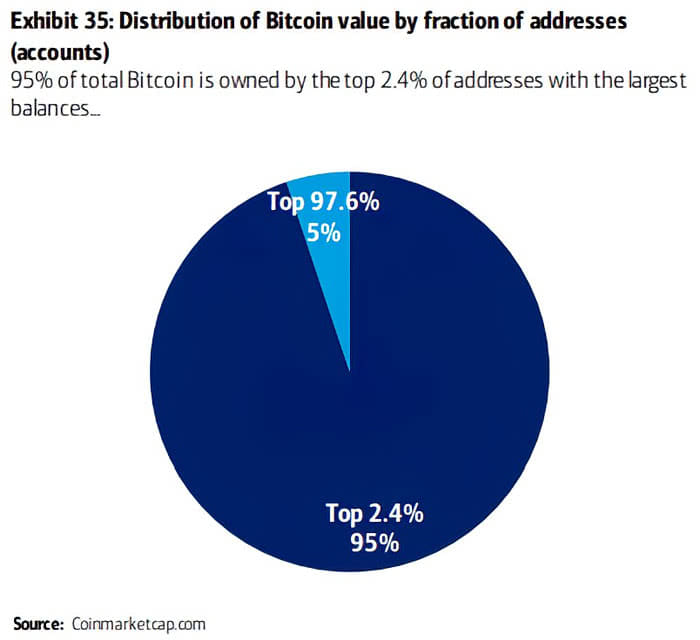 Which doesn't effect the price.

What you should be quoting is the %age of active accounts, which impacts price movements, as it is the market of the balance between buyers and sellers that dictates the price, not the distribution of account values.

0FXTrader0 said:
but thats only 5% of the market actually trading the rest is being hodl
Click to expand...

The 'held' volume does not impact the price.

0 0
that's one hell of a risk/weight hanging over the market. Any whale who outs will cause a significant price crash.

0FXTrader0 said:
that's one hell of a risk/weight hanging over the market. Any whale who outs will cause a significant price crash.
Click to expand...

Which is why the price is notoriously volatile.

Bitcoin price is 100% determined by the market, as it CANNOT be deflated or inflated by supply.
The supply of additional Bitcoins is fixed, entirely predictable and capped.

As the active user base grows (and it grows rapidly) the impact of trading and so price fluctuations will diminish as higher and higher proportions of a limited supply are taken up users of the currency, rather than speculators.

This is unlikely to be noticeable until after market cap in supply has been reached.

You need to remember, always, that Bitcoin is NOT fiat and so is NOT subject to the manipulations that plague fiat.

0 0
For once you sound positive and not bitter twisted except at the end talking about fiat (if you hate fiat that much give some to charity)...you know there's an 'incoming BTC crash' you read these forums

0FXTrader0 said:
For once you sound positive and not bitter twisted except at the end talking about fiat (if you hate fiat that much give some to charity)...you know there's an 'incoming BTC crash' you read these forums
Click to expand...

I'm neither bitter nor twisted, just wise to the lessons of history and basic exponential mathematics.

Any currency system, and there are many, not based on a store of value that is highly divisible, easily exchanged, and scarce is inherently flawed and doomed to fail. Fiat is the widely adopted present example of such. Cryptocurrency has no such flaws.

That is NOT to say that whilst it (crypto) remains relatively unused as a currency in proportion to the volumes traded and speculated that it won't be very volatile indeed in terms of it's exchange price to more conventional currencies, but only to say that it is not subject to their flaws and that in the longer term, that is what counts.

Speculate on cryptocurrency at your peril, doing so could make you very rich or very poor, very quickly.

Although, by all means, trade it IF you are sure and confident in your ability to do so. Which is a BIG if.

But certainly, you should use it wherever possible in preference whenever advantageous.

After all, it's near instantly transferable, has minuscule and therefore negligible, transaction costs and is increasingly widely accepted.

Or you could carry on paying the ridiculously high transaction costs of using fiat if you so prefer.

3 0
People control the price as well, when they invest - it growth. Just look how the price ''exploded'' when Musk decided to invest 1.5 billion in bitcoin. Of course there a lot of factors, but this a very important one too. As long as more people continue to invest, it will constantly grow bigger and bigger. I don't have that much money to invest in bitcoin, and I don't think that it's worth it, because it can grow like 700% in a week at this point, that's for sure, therefore I will bet on Digital Yuan, it's been growing very fast in the last days, and continuing to do so..
Last edited: Apr 21, 2021
W

2 0
Elon with his twitter controls BTC's price for sure!) His tweets move markets. When he changed his Twitter bio in late January to #bitcoin, the price of Bitcoin rose nearly 20% in a matter of hours. Musk has also tweeted about Dogecoin, but claimed recently in a Clubhouse chat that his tweets about the cryptocurrency are “jokes.” Jokes or not, when Musk tweets, people listen - and act. So if after another Elon's tweet you want to sell/buy crypto as soon as fast try Paydepot map of ATMs.
Last edited: Jun 26, 2021

Gibstbor said:
therefore I will bet on Digital Yuan
Click to expand...

.... which is Fiat.
It's a Central Bank Currency.
Everything Bitcoin was designed to replace.

But sure, if you want to bet on FX, then by all means, bet on a major currency that doesn't have a floating exchange rate.

Probably not the smartest thing to do, but it's your money.

W
Doge to the Moon

Cryptocurrencies May 25, 2021
Henow1969
H
A
What bitcoin looks like when smart people buy.

F
$12k Bitcoin Can Unlock Prices "As High as Imagination" Will Allow: Analyst