timsk said:
The Russians really are beyond the pale. The lengths they'll go to in order to frame the Ukrainians knows no bounds. They must have captured (rather than destroyed) one of the 16 U.S. Himars and then wasted one of the rockets to blow up the PoW building. What do they cost: somewhere in the region of $100,000 for each one? That's a lot of time, effort and money wasted in a vain attempt to make it look as if Ukrainian forces are responsible. After all, if they just wanted to kill the prisoners, surely they'd just line them up against a wall and shoot them? Quick, easy and cheap: job done. Needless to say, I smell a rat.
TIm.
Click to expand...

The evidence is overwhelming it wasn't a HIMARS missile that killed the Azov POWs in the Volnovakha prison camp.

On July 28, a blast consumed a building in Eastern Ukraine, killing 53 Ukrainian POWs sleeping inside. Moscow claimed the prison had been struck by a rocket fired by a HIMARS artillery system given to Kyiv by the U.S. Here's why many observers find it far more likely Russian forces were responsible.

Why would the Russians would want to make it look like Ukraine killed people who Russians hate but most Ukrainians consider heroes? Maybe that would be to deny another one of these:

So, you are right about the rat. 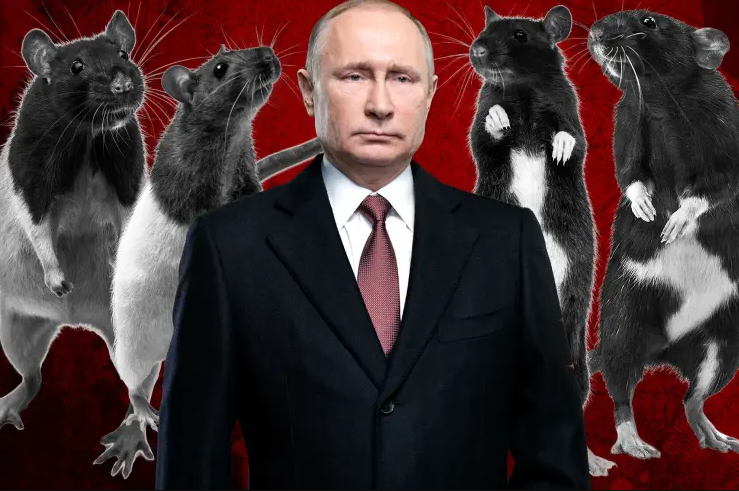 Rufus_Leakey said:
The evidence is overwhelming it wasn't a HIMARS missile that killed the Azov POWs in the Volnovakha prison camp.
Click to expand...

The evidence is always overwhelming whichever side one is on!

Rufus_Leakey said:
Why would the Russians would want to make it look like Ukraine killed people who Russians hate but most Ukrainians consider heroes?
Click to expand...

From the Forbes article you linked to:
"Russian sources claimed Ukraine attacked to prevent the POWs from ‘exposing’ their supposed crimes, or to discourage Ukrainian troops from surrendering." Then there's the propaganda coup to reinforce the 'Zelensky and Ukraine good - Putin and Russia bad' mantra. No one would ever suspect that Ukraine would kill their own soldiers - so it could only be the Russians who would commit such a heinous crime. Yeah, right!

Rufus_Leakey said:
So, you are right about the rat.
Click to expand...

As always, I have an open mind about who's responsible and why. And if Russia is proven to be the culpable - then I'll happily condemn their actions and hope that those responsible are brought to justice. My post wasn't to claim that Ukraine is responsible, but merely to put forward an alternative narrative to the predictable one that c_v provided that Russia's the guilty party. None of us knows the truth. All we know is that western politicians and MSM have an agenda to paint Russia as bad guys at any and every opportunity, when there's plenty of 'overwhelming' evidence that shows Ukrainian forces are just as capable at playing dirty.
Tim.

Here is overwhelming evidence that Ukraine is bad

Written by Esha Krishnaswamy. Originally published by The Gray Zone Once condemned by Ukrainian officials and imprisoned for sadistic torture...

Sudden War Crimes Amid Tactical Pause. Who Benefits Them Most? (21+)

Russian spec-ops in Ukraine has been going on for the 6th month now. Mostly successful for Moscow the combat is...

Battle to end the war: Ukraine's chance to get edge over Russia

The third phase of Russia's war on Ukraine is coming. The first, the Kremlin's brazen blitzkrieg in late February that culminated in the Battle of Kyiv, failed. The months-long Battle of Donbas in Ukraine’s east making up the second phase

Zelensky's Adviser: 'There Are No Normal People In Ukraine. They Are Stupid, Brainless, Manipulated'

Adviser to the head of the office of Vladimir Zelensky, Alexey Arestovich, described the Ukrainian people in one of...

In the vid' below, Brian Berletic of The New Atlas interviews Mark Sleboda, an international relations and security expert based in Russia. He's a U.S. Navy veteran, married to a Ukrainian woman with family and friends in the country. His insights are, IMO, extremely revealing and, needless to say, he paints a very different picture to that put forward by western governments and media. There's a particularly interesting segment in which he and Brian discuss the bombing of the Ukrainian PoWs. Brian is quite circumspect about who was responsible and what their motives might be, whereas Mark is anything but. The latter explains why he believes Zelensky's forces killed their own soldiers and then goes on to explain why the U.S. not only wants the conflict to continue but also wants as many Ukrainian conscripts killed by the Russians as possible. If he's right, then I hope we can all agree that our leaders - and especially the Biden administration in the U.S. - have sunk to new levels of unimaginable depravity. Truly sickening. I hope he's wrong about his assertion - but I fear he's right.

If anyone wishes to comment on the video, please focus on the message and not the two messengers!

Why Do They Keep Silent About Children Trafficking in Ukraine?

Written by Oliver Martin It is 6 months already since the Ukrainian war began. Our news feeds are full of...

It remains to be seen whether the UN will implement appropriate measures against Kiev. Written by Lucas Leiroz, researcher in...

Evidence points that there was no Russian participation in the Bucha incident. Written by Lucas Leiroz, researcher in Social Sciences...

Evidence points that there was no Russian participation in the Bucha incident. Written by Lucas Leiroz, researcher in Social Sciences...

He might just have a little bit of bias.

Rufus_Leakey said:
He might just have a little bit of bias.

He sounds like the perfect guest for Brian's next propaganda piece.

Rufus_Leakey said:
He might just have a little bit of bias.

Oh dear gents. (Again).
Surely you know that the worst propaganda, the worst bias and the worst levels of misinformation come from laughably entitled 'fact-checking' sites. (Think 'FullFact' here in the U.K.) 'Stop Fake' is transparent about being pro-Ukraine; at least they don't try and hide it. Naturally, they'll do anything they can to hit back at accusations of Ukrainian war crimes. That said, in order to confirm its true agenda, all one need do is look at how it's funded. Top of the list of donors is The International Renaissance Foundation, where, low and behold, we discover that "the foundation was founded by the philanthropist George Soros and is part of the Open Society Foundations international network." Case closed!

Now, as for the article itself, it's a blatant hatchet job on the french journalist. It's trying to discredit the 'Massacre in Bucca' story by discrediting the journalist. An old trick which, sadly, some folk still fall for. Note that no attempt - none whatsoever - is made by Stop Fake to address the details of the story itself. You know, the inconvenient ones that establish beyond all doubt that the Russians were not responsible for the atrocities. (No sign of decomposition of the bodies, even though they'd supposedly been lying in the streets for many days. No one moving them after the Russians moved out. The town mayor not mentioning the murders etc! The list goes on and on.) Yet again, as is so beloved by those on the wrong side of the argument, it's a case of having to shoot the messenger because there's no credible evidence - zilch, nada, none - with which to criticise the message.
Tim.
Last edited: Saturday at 9:15 AM

Both Zelensky and Poroshenko Acknowledged They Came to Power Illegally

Written by Eric Zuesse A coup is an illegal way to come to power, and both of Ukraine’s Presidents after the February 2014...

The Ministry of Defence’s statement said a slew of commanders have been dismissed as Putin rages at their failures., according to The Sun.

Specifically, the report claims: “The poor performance of Russia’s armed forces during its invasion of Ukraine has been costly for Russia’s military leadership, highly likely resulting in the dismissal of at least six Russian commanders since the start of hostilities in February 2022.

“General-Colonel Aleksandr Zhuravlev, who has commanded the Western Military District since 2018, was absent from Russia’s Navy Day in St Petersburg on 31 July 2022 and has highly likely been replaced by General-Lieutenant Vladimir Kochetkov.

“General Aleksandr Vladimirovich Dvornikov has subsequently been removed after been given overall command of the operation in Ukraine, and General Sergei Surovikin has assumed command of the Southern Grouping of Forces from General Gennady Valeryevich Zhidko.”

This comes as Ukrainian military officials report that Russia has lost at least 42,000 troops since the start of the conflict.

It comes as Moscow and Kyiv traded accusations over who bombed the Zaporizhzhia nuclear site in southern Ukraine, Europe’s largest atomic power complex, which has been under Russian control since the early days of the February 24 invasion.
Click to expand...

I have an idea where Russia can find some replacement generals...

The pariah state’s offer of military assistance could not be immediately verified, but it was seized upon by Russian defense pundit Igor Korotchenko.

nypost.com
Last edited: Yesterday at 2:06 AM