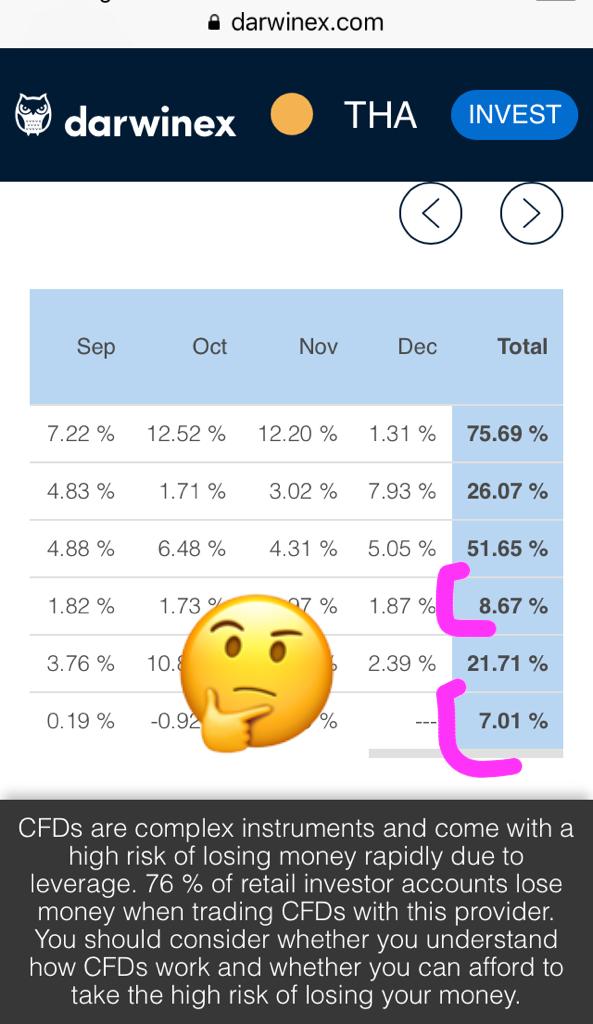 These kind of trading approaches (99.99% of the trading strategies) cannot have positive results on equal periods of time.

That’s really stupid because actually, the even definition of the word « Consistency » is to have positive results on equal periods of time.

Only a trader who has found how to extract himself from the dependence of a signal to enter in the market can have positive results on equal periods of time.

I don’t know in which language and how many time i will have to write this...

Pure Pip Producer said:
So, i did it right now.

In june 2020 the problem has been solved. Then we had a lot of private tests and we finally started the trading account on july 17th, 2020.

Since that day and until the next trading day we should probably operate (the first working day of november), there is exactly 107 days.

Number of days past by the Equity Curve in Drawdown during these 107 days : -21 days

Number of days past by the Equity Curve at the High Water Mark during these 107 days : +86 days

I'm watching only this. To maintain that score positive. Independently of what all the traders/investors think.

I am aware that it flays the buttocks of some.

Update of this incredible Challenge ! (The hardest i have in trading.. so much harder than to be positive every quarter!)

Remember, the goal is to maintain this number of days positive. That's very hard. But i like hard Challenges... in order to write the History.

Since that day and until the next trading day we should probably operate (the first working day of december), we have 29 days to add to the 107 days...

So, we are now at 136 days since inception of the Real Pure Pip Production on the FCA Adjusted Risk Darwin/Darwinex Brokerage.

On these 29 days, we have past only 3 days at the Top of the Equity Curve and 26 days in Time Drawdown.

The update is now :

Number of days past by the Equity Curve in Drawdown during these 136 days : -47 days

Number of days past by the Equity Curve at the High Water Mark during these 136 days : +89 days

Another hard Challenge is coming in a next post, very soon. Thus, i would have 3 Hard Challenges. I mean, you’ll have 3 things to pray everyday to make these things happen

Currently, the positive quarters Challenge is the easiest challenge and the hardest is to maintain a positive Time Drawdown Scoring.

The 3rd Challenge is also very difficult, i would say that its the level of diffilculty is between both.

Pure Pip Producer said:
About the last monthly performance (Risk -0.15/Gain +3.04%), i would add that it's about the process, not about the performance.
Click to expand...

October 2020 has been a very good month because the Initial Risk taken to generate the performance has been very low (only -0.15%, to produce +3.04% of Pure Alpha Performance).

Actually, the -2.43% Drawdown occured after a huge first week of performance +2.60%. That kind of Drawdown is less important. It's just giving back some recent profits.

I have managed very well the US elections... but not so much the Pfizer vaccine announcement... Then, the last trade, we tried to catch a "Positive Black Swan". It didn't work on that time... the day we'll catch it, you will probably understand, that here, it's the Champions' League.


To those who were asking : "But what if Pure Pip Producer starts by losses at the beginning of the month?"

The answer to this question is the following :

The game is to have the maximum of the odds from our side, and not to say what will happen or not.

Those who are always in the markets, fighting, haven't all the odds from their side.

Those who operate like we do could also have an initial risk at the beginning of the month lower.

It's just a matter of operate with all the odds from our side.

By "odds" most of the people understand "technical odds"... we aren't in that case. We are in the case of "Physical odds".

Something that systematic traders can not do at all... because even if their brains are rested and fresh, their job is only to repeat a decision they took long time ago, without the possibilty to use their rested and fresh brains...

So, this could be aply only to non-systematic traders.


Stay tuned for the 3rd challenge... one of the previous post gave me the idea about that... it's about something that also doesn't exist at Darwinex.

I've to check again If it's the case. If yes, this 3rd Challenge will be added to the 2 others.


Without all these Challenges, Darwinex trading would be so boring to me... hahahahaa

I've started to alert about this current Drawdown, it was on october 13th, when the Drawdown was around -4%.

Some ppl wrote that i would attack... some others understood that i alerted and also avoided the finally -9% drawdown of the SYO Red October.

The floating quarter was able to avoid 5% of this Drawdown.

So, the only words we could say is : "Thank you"

So, please, don't come to say that's a good trading strategy... Nobody would believe it.
Fortunately, the Darwinex Risk Manager Algorithm did a great job... and has transformed the -25% into a -9%.​
Last edited: Nov 15, 2020
Reactions: Viro Major

I sometimes double-check the info about the brokers I use, just to see if there's any update.
This is what I found on the FCA register this morning regarding Darwinex:

They just registered 2 new companies, right after shutting down the forum.
I hope this is not (again) bad news...
Reactions: Pure Pip Producer and CavaliereVerde

Pure Pip Producer said:
do you think i can maintain a DD at zero?

Recently, it seems that some ppl here, were shocked when i was at -2% Drawdown... like if i would never be in Drawdown

We all know that to maintain a Drawdown at zero is strictly impossible...

But, are we really totally sure about that?

If a trader on Earth could meet this Challenge, don’t you think only Pure Pip Producer could be enough ambitious to do it?

So, here is the 3rd Challenge : Maintaining the Drawdown at Zero on the Darwin underlying trading account. 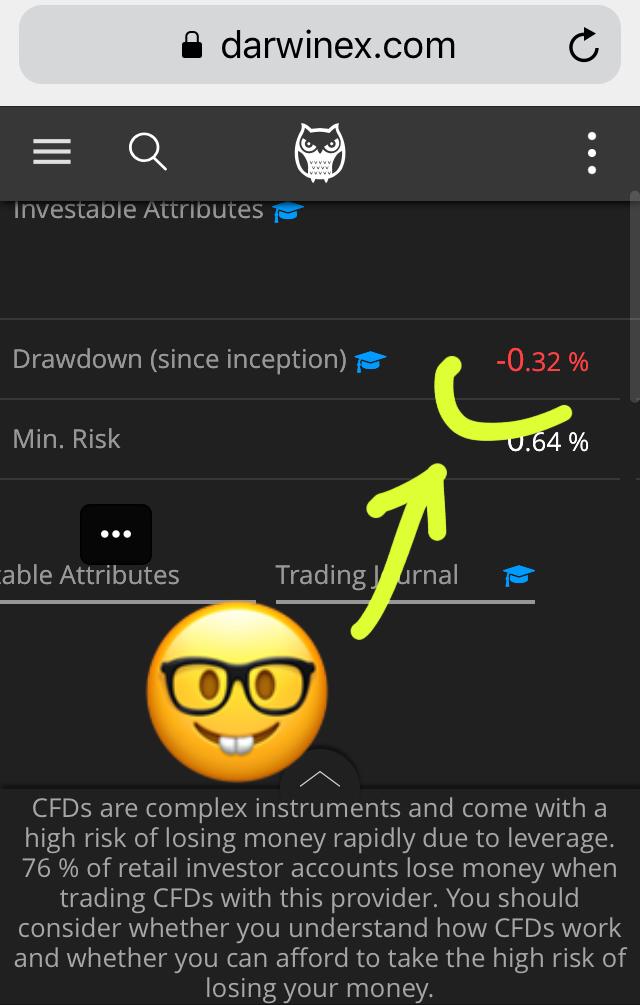 So we have now 3 huge high level Challenges strictly impossible to maintain for the common super traders, right?


1- All the Quarters Positive

3- The Max Drawdown at Zero

I think now you have enough Challenges to understand...

... to understand the Level i’m speaking.

You have now 3 lucks more to come to tell me i failed...

I hope some smart ppl here understand why i push the level so high...

itstradingtime said:
I sometimes double-check the info about the brokers I use, just to see if there's any update.
This is what I found on the FCA register this morning regarding Darwinex:

View attachment 291192
They just registered 2 new companies, right after shutting down the forum.
I hope this is not (again) bad news...
Click to expand...

Probably, one of these company is for the Private Label ?

Because, it could be difficult to put in the same basket, the normal Darwins and the Private Label Darwins...

As we can see on this pic, the "Darwinex New Mean Drawdown" (it's like a Daily Drawdown Average) was, once again, reduced by this new way to calculate. Unless i'm mistaken, i do not see some others Darwins this happens...

It has become exactly the same of the Max Drawdown!

Soon, will it become better?

Note that the price of the Darwin PDC is at $117.55, when the new reduction of the "Mean Drawdown" occurred : 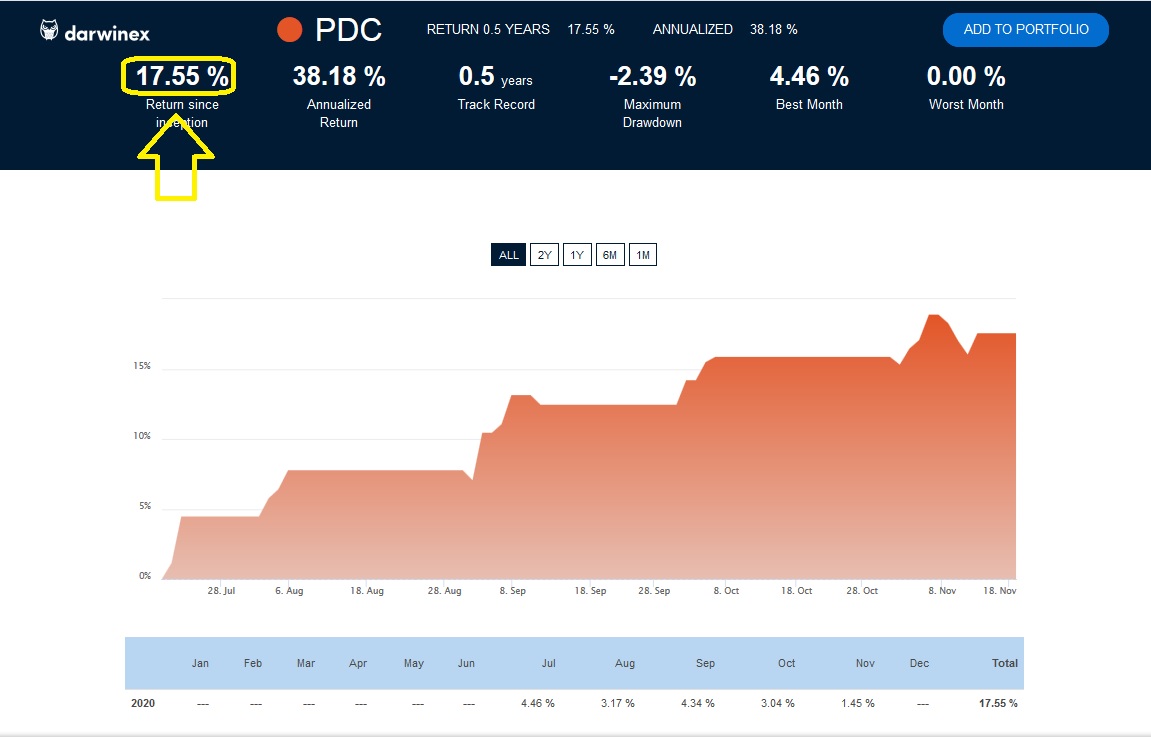 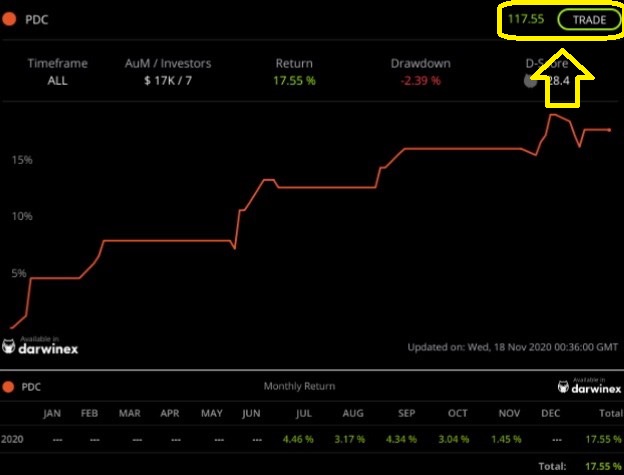 jonfuentesx said:
I think it's a slippery slope that can lead a person to start looking for their dopamine kick instead of real profits. It is the ideal system for the way the brain works with addictions, such as pulling a lever on a slot machine.
Click to expand...

Mark Douglas in "Trading in the Zone" call it : the dependence on random gains.

To solve that kind of problem, we must take the kind of risk we can not take if we have a job, a wife, children.. etc.. Because, it's something really deeply rooted. It comes from chilhood.

500 257
In the same time, the Real Pure Pip Production applied on the trading account underlied to the Darwin PDC, has still the exact same Equity Curve :

It is the same Equity Curve because it's only pips that are extracted from the market without using any artifice.

So, the Darwinex algorithm can apply its own Money Management, without any distortion.


Actually, everybody could apply his own Money Management, if he had an access to the Pure Pip Production.

For example, those who would like only 10% per year could apply their own Money Management on a this Pure Pip Production.

Those who want 100% per year could also apply their own Money Mangement, if they had an access to the Pure Pip Production.

Because, it's PURE... and as it's PURE, we can apply the Money Management we want... Like an à-la-carte service.

I respect guys like you (not like), out of the ordinary and with a clear personality. Though I disagre with your views and style on many of your posts. Anyway, I would like to know what your view is on the declince in AUM
on your Darwin? Honest and objective not subjective please. Why do you think Investors have withdrawn their funds?

Edit : Others was short-term traders. For example, one put 10k during the 2 weeks of inactivity.. after 2 weeks, he withdrew the 10k just before november 1st. Probably a guy who doesn’t read this forum and who didn’t know we stopped trading to make our Equity Curve draw « High-Plateaus ».

Sterso7 said:
Though I disagre with your views and style on many of your posts.
Click to expand...

These posts will become legenday!