Leonardo Pisano, nicknamed Fibonacci, was an Italian mathematician born in Pisa in the year 1170. His father Guglielmo Bonaccio worked at a trading post in Bugia, now called Béjaïa, a Mediterranean port in northeastern Algeria. The young Leonardo studied mathematics in Bugia and during extensive travels, he learned about the advantages of the Hindu-Arabic numeral system. In 1202, after returning to Italy, Fibonacci documented what he had learned in the “Liber Abaci” (“Book of Abacus”). In doing so, he popularized the use of Hindu-Arabic numerals in Europe.

The Golden Ratio
This figure – 1.618 – is called Phi or the Golden Ratio. The inverse of 1.618 is 0.618. The Golden Ratio mysteriously appears frequently in the natural world, architecture, fine art and biology. For example, the ratio has been observed in the Parthenon, Leonardo da Vinci’s Mona Lisa, sunflowers, rose petals, mollusk shells, tree branches, human faces, ancient Greek vases and even the spiral galaxies of outer space.

Fibonacci retracement levels are depicted by taking high and low points on a chart and marking the key Fibonacci ratios of 23.6%, 38.2% and 61.8% horizontally to produce a grid. These horizontal lines are used to identify possible price reversal points.

Fibonacci Retracement Levels as Part of a Trading Strategy
Fibonacci retracements are often used as part of a trend-trading strategy. In this scenario, traders observe a retracement taking place within a trend and try to make low-risk entries in the direction of the initial trend using Fibonacci levels. Simply put, traders using this strategy anticipate that a price has a high probability of bouncing from the Fibonacci levels back in the direction of the initial trend.

For example, on the EUR/USD daily chart below, we can see that a major downtrend began in May 2014 (point A). Price then bottomed in June (point B) and retraced upward to approximately the 38.2% Fibonacci retracement level of the down move (point C). 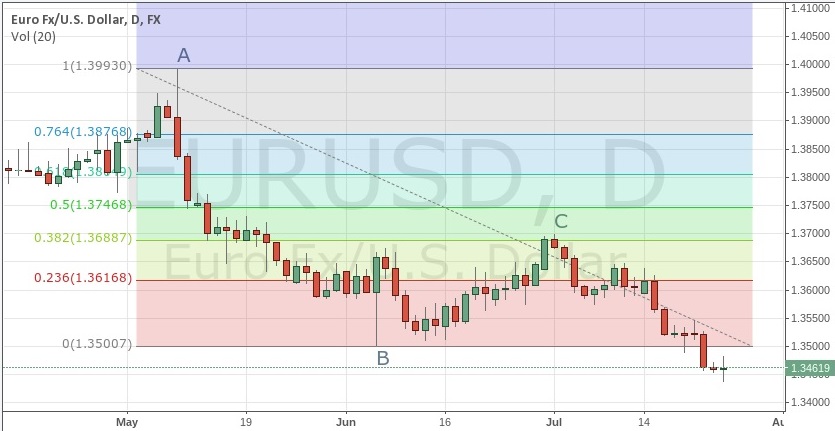 In this case, the 38.2% level would have been a good place to enter a short position with the goal of capitalizing on the continuation of the downtrend that started in May. There is no doubt that many traders were also watching the 50% retracement level and the 61.8% retracement level, but in this case, the market was not bullish enough to reach those points. Instead, EUR/USD turned lower, resuming the downtrend and taking out the prior low in a fairly fluid movement.

Keep in mind that the likelihood of a reversal increases if there is a confluence of technical signals when price reaches a Fibonacci level. Other popular technical indicators that are used in conjunction with Fibonacci levels include candlestick patterns, trendlines, volume, momentum oscillators and moving averages. A greater number of confirming indicators in play equates to a more robust reversal signal.

Fibonacci retracements are used on a variety of financial instruments including stocks, commodities and foreign exchange. They are also used on multiple time frames. However, as with other technical indicators, the predictive value is proportional to the time frame used, with greater weight given to longer time frames. So, for example, a 38% retracement on a weekly chart is a far more important technical level than a 38% retracement on a five-minute chart.

Using Fibonacci Extensions
While Fibonacci retracement levels can be used to forecast potential areas of support or resistance where traders can enter the market in hopes of catching the resumption of an initial trend, Fibonacci extensions can complement this strategy by giving traders Fibonacci-based profit targets. Fibonacci extensions consist of levels drawn beyond the standard 100% level and can be used by traders to project areas that make good potential exits for their trades in the direction of the trend. The major Fibonacci extension levels are 161.8%, 261.8% and 423.6%. 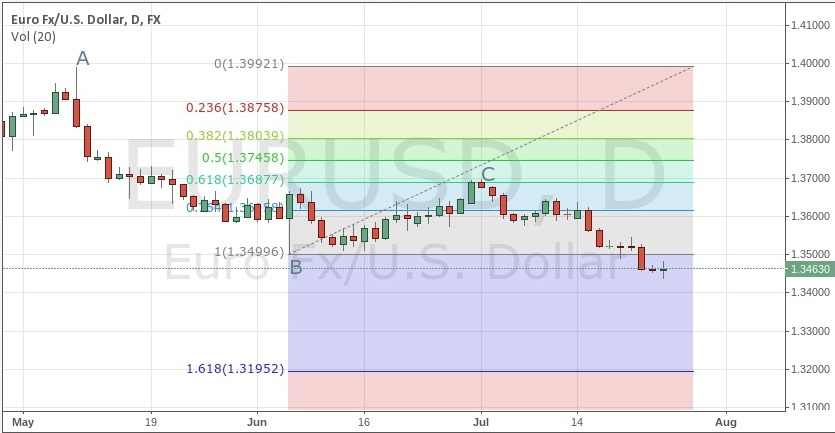 Looking at the Fibonacci extension level drawn on the EUR/USD chart above, we can see that a potential price target for a trader holding a short position from the 38% retracement described earlier lies below at the 161.8% level at 1.3195.

In Summary
Fibonacci retracement levels often mark reversal points with an uncanny accuracy. However, they are harder to trade than they look in retrospect. The levels are best used as a tool within a broader strategy that looks for the confluence of a number of indicators to identify potential reversal areas offering low-risk, high-potential-reward trade entries.

Dan Blystone can be contacted at TradersLog Dan Blystone is the founder of www.traderslog.com which provides news, articles, charts, webinars and other quality content of interest to traders. Before this he worked as a futures trader and broker.

Dan Blystone
Dan Blystone is the founder of www.traderslog.com which provides news, articles, charts, webinars and other quality content of interest to traders. Be...
View thread (10 replies)
N

What's your trading strategy, is it fibs?

i am just looking for advice on what to do
F

In all liklihood the problem is either the strategy or how you are applying it. Personally I think it's the former but that's only because have observed very very few people are able to make technical-only strategies work for them. The ones that do operate as far as I can tell on fine margins. I should point out that my market focus is fx and this could all be completely hogwash in that it might actually work in other markets. Since you are trading fx I can tell you with confidence that you are wasting your time perusing a technical strategy in a fundamentally driven market.

Other traders on here and other forums will dispute this but I can tell you from working on a professional level in the industry for many years that none of the institutions trade that way. Technical traders pull the trigger and hope it works out which is why the few that can make it work have tight margins. Don't believe those that tell you we'll I risk one to make three so I can get away with a 50 percent win rate. The problem with this school of thought is the market doesn't work that way. Every move will garner interest but with varying degree. One move might yield 20 pips and another several hundred. You cannot quantify the scope technically because all you have to go by is historical price which is out of context to the current move. So applying a 3:1 ratio isn't really going to work and if it did everyone would be successful.

So instead of trading uncertainty they trade certainty and within that they have access to context to allow them to define appropriate targets and risk. Would you rather enter a trade and sit around waiting and hoping it works out or, enter a trade that you know with a high degree of certainty the market will react instantly because everyone who's anyone in this business is watching the same thing. The technical aspect of trading should only be used to manage trades and nothing else or your success will be limited and maybe even reversed.

So as a suggestion you should throw away what you are doing and start looking at the market like the traders that make money from it do. You will position yourself for greater success as a result.

Give me a workable strategy that i will use to trade forex, since you say i should trade with fundamental information please kindly tell me where to get this details. Thank you.
F

nwabueze57 said:
Give me a workable strategy that i will use to trade forex, since you say i should trade with fundamental information please kindly tell me where to get this details. Thank you.
Click to expand...

Do you want me to send it via courier and include free tickets to a 2 week holiday? Seriously, do some research and get an idea what to do. Nobody is going to just hand over a working strategy to a stranger asking

you are new to Trade2win so let me advise you about the way it works here and in pretty much all forums...

you are not going to get all the answers to trading and the secrets of the universe here....you will get assistance and pointers and guidance if you are prepared to be patient and seek out those who will help you

I don't have the time to teach anyone because I know the level of attention and time that involves which isn't a luxury I have. I can give pointers and what tools to use and have a thread of my own you could follow.

Sent from my SM-G950F using Tapatalk
You must log in or register to reply here.

Article Taking The Magic Out Of Fibonacci Numbers

Article How to use Fibonacci Retracement Levels

Article Why Successful Traders Use Fibonacci and the Golden Ratio

Sep 12, 2006
aswilled
A
T
How many kinds of main strategies are there in FOREX trading?