S&P 500 index  futures surged in popularity in the past decade after the SEC’s pattern day trading rule triggered an exodus of retail capital out of equities and into Globex, CME’s 24-hour electronic trading platform. Volume hit a historic peak in 2011, underpinned by a worldwide transition in risk from individual securities to broad macro instruments, driven by an explosion in ultra-modern derivative products. Along with the Nasdaq 100 and Russell 2000 Index futures, the threesome carve reliable road maps for active traders seeking intraday buy and sell signals.Futures trading in the hours between New York’s U.S. equity close and the next morning’s open captures market-moving events in Asian and European bourses. In turn, these generate short-term convergence-divergence relationships that predict price action during regular trading hours.

The S&P 500 anchors these relationships, ranking as the most popular equity futures contract in the world, often foretelling broad directional impulses without other contracts or market signals.  There are two common ways for active traders to play S&P 500 index futures. First, take risk directly in reaction to typical technical analysis signals, including breakouts, breakdowns and pullbacks. Second, apply feedback to other instruments in highly correlative environments, in which thousands of equities, currencies and other world markets trade in alignment with, or in opposition to, futures contracts. This synchronicity is common at key turning points when institutional capital allocates risk based on broad macro forces, rather than the attributes of individual securities. 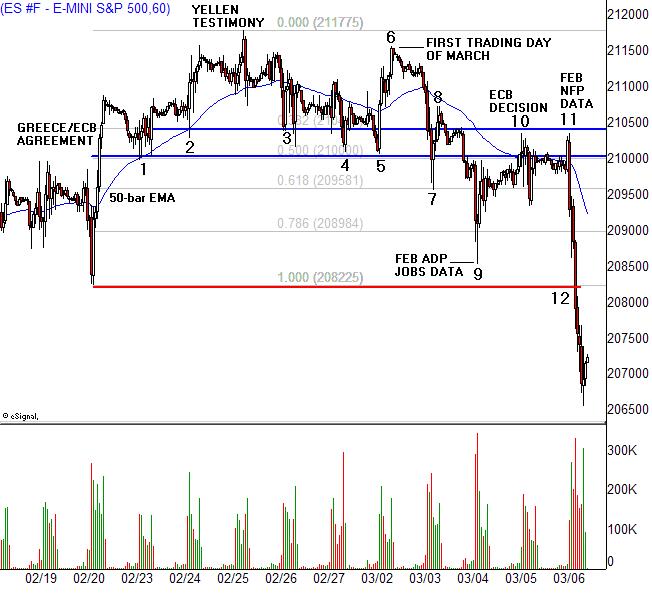 Let’s examine a typical S&P 500 price progression and how it foretold a major decline while providing active traders with a series of short-term buy and sell signals. We will use the 60-minute, 24-hour chart, a staple for futures traders because it captures overseas events while highlighting key levels not hit during the U.S. session. The contract rallies from 2082 to 2118 between Feb. 20 and 25, and pulls back. A Fibonacci grid stretched over the price swing captures the step-by-step deterioration that yields a March 6 breakdown. 2100 sets up at the 50% Fibonacci retracement, highlighting its importance as price pulls back and tests support twice (1,2) before the final high print and three times afterward (3,4,5). In turn, these five tests establish a broader support zone between 2100 and 2105 (blue lines). The contract rallies to a four-day high (6) after the fifth test and sells off, establishing the first lower high since Feb. 20. This is a classic sign of weakness, as outlined in the Dow Theory more than 100 years ago. Although originally observed in the DJ Industrial and Railroad Averages, it works exceptionally well as a signal generator, on both intraday and daily futures charts.

The lower high gives way to a sell-off (7) that breaks through the support zone. First violations rarely lead to instant trend changes in the futures markets because algorithms that dominate Globex prefer to clean out order volume on both sides before entering broad directional impulses. This bias contributes to a short squeeze above the support zone (8) that attracts aggressive selling pressure and a deeper low (9) in the following session. That low tests the February swing low (red line) and finds support at the 0.786 retracement. The contract bounces to support one last time and prints two failed tests (10,11) before rolling over in a breakdown that accelerates when it undercuts the prior lows, dropping another 20 points in four hours.

The event timeline illustrates how S&P 500 price action aligns with key macro impulses, often on the other side of the planet. This tells the observant trader to pay close attention to economic and political catalysts when institutional capital is likely to execute the most aggressive strategies. It is also highly instructive when bullish news such as ECB  qualitative easing and strong U.S. jobs data fails to push the contract above a broken support level, as it did on March 5 and 6.

Standard stuff
You must log in or register to reply here.

Dec 31, 2021
4xis2ez
4
B
Implementing Algo Trading? 9 Things that do not come easy when creating Bots