Tape readers have an advantage over chartists because they can interpret intraday data in real time, filtering pages of numbers into surprisingly accurate predictions on short-term price movement. This near-legendary market skill has additional perks, allowing them to measure emotional intensity of participants while they uncover the day’s leaders and laggards. In turn, these generate a broad trading edge that adds firepower to longer-term market strategies.

The basics of tape reading can be learned in a few minutes but the practice takes a lifetime to master, for three reasons. First, the market is enormously complex, requiring many years of observation to understand how individual parts affect the whole. Second, macro forces that move world markets change over time, with qualitative easing controlling one cycle, while a housing bubble keeps markets afloat in another cycle. Third and most importantly, the market structure has changed dramatically over the years, forcing tape readers to continuously learn new skill sets.

Revolution in Market Structure
In the 1990s, 50-cent bid-ask spreads forced tape readers to abandon simple tickers and focus their attention on market depth screens, commonly known as Level II. This practice printed money in the first few years because it read supply and demand accurately, showing the standing orders of big players as well as which market makers or axes were in control of the security’s direction in that session. The SEC’s pattern day trading rule then came along in 2001, triggering an exodus of capital from equities into CME Globex index futures. In turn, those instruments have taken on enormous power, moving thousands of securities at a time

Many tape readers abandoned Level II in the next few years, instead watching index futures for clues on broad equity impulses. Level II lost more adherents in 2007, with the adoption of SEC’s Regulation NMS, which opened the door to high frequency trading computers (HFT), dark pools and other algorithmic code that now captures more than 70% of equity volume. Tape readers have adapted well to this electronic environment and now watch a broader array of market inputs than at any time in history.

Heard enough and want to become a skilled tape reader? Here are some tips and techniques to help you get started.

Pre-Market Preparation
Start in the pre-market session, looking at the overnight index futures. Keep a 60-minute, 24-hour S&P 500 index futures chart on your screen at all times, referencing overnight levels during the regular US session. Check out whether that index is leading or lagging the Nasdaq 100 and/or US Treasury bond futures. Nasdaq leadership and lagging bonds point to risk assumption, in which traders want to own more speculative instruments, while S&P 500 leadership and strong bonds suggest risk aversion, often driven by adverse events in other world markets.

Consider the impact of the projected open and how gaps will impact trader psychology. Big gaps have become more common in recent years due to the rise in 24-hour trading and playing them well requires careful strategies, as noted in How To Create Profitable Short-Term Gap Strategies. Get ready by estimating how opening prints will interact with overnight levels. A gap into an overnight high or low suggests rangebound action that may yield a quick reversal, while a gap into levels not traded for days or weeks carries a higher likelihood of trend day action wherein major instruments thrust in a single direction for most part of the session.

First Hour Tells
Note the opening prints on the S&P 500, Nasdaq 100 and Russell 2000 futures or underlying ETFs The relationship between price swings and those levels presents the first tell of the day, with bulls in control above opening prints and bears in control beneath. Mark out the first 5- or 15-minute trading ranges, looking for small sideways patterns that could yield breakouts or breakdowns later in the session. Now, take your first look at the relative strength and weakness, pulling up a list of the most liquid ETF for each major sector. Sort the list by percentage change, exposing the strongest and weakest funds in the first hour. This may also identify rotational strategies that persist for the entire session. 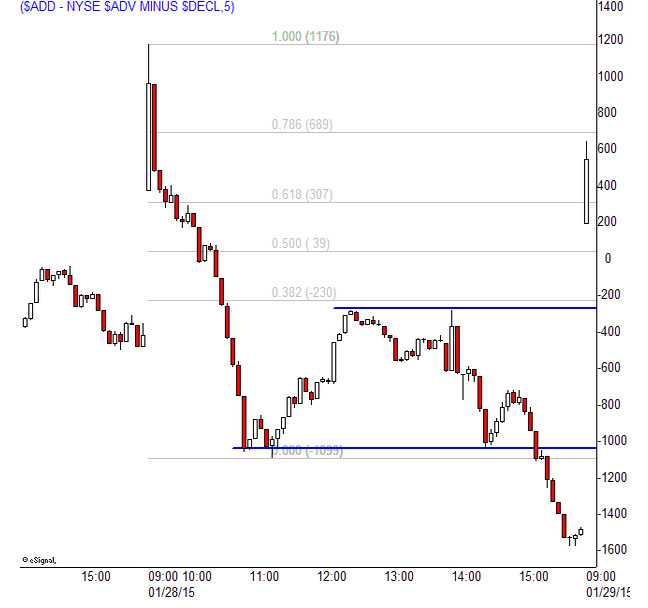 Next, pull up the NYSE and Nasdaq advance/decline and up:down volume indicators. These four data sets yield immensely useful tells on short-term capital flows, rotationally as well as in and out of cash. The advance minus decline variation also carves predictive intraday patterns, often ahead of price, as you can see when the indicator reversed sharply after a strong January open. This reversal led a nasty decline that dropped major indices deeply into the red.  Notice now a Fibonacci grid over the initial plunge predicted the extent of a midday recovery, while swing lows near 1000 defined support that broke in the last hour.

Now look at VIX, recording observations about the morning tape. First, is it flashing red or green after the first hour and is that number trending higher or lower? Rising VIX signals conflict or fear that favors lower prices, while dropping VIX reveals a speculative appetite that supports higher prices. Second, track divergences between VIX and index action because they often resolve with capitulative behavior that forces the indicator or index to reverse and follow.

Midday Messages
Track first-hour themes into the lunch hour, watching opening prints and market internals. Be especially vigilant when indices push well beyond prior closing prints and then reverse gears, pushing back in the other direction. Market tells become primary leading indicators at these inflection points, often breaking out or reversing ahead of price. These can be used to build or add to intraday positions, or as exit signals, allowing you to take profits or losses ahead of the crowd that gets trapped by sudden changes in the market tone.

Pay special attention between 11:30am and 12:00pm Eastern time when European markets end their trading days, often forcing US indices through key price levels. With other world markets closed, US afternoons may elicit a second theme of the day, with internals shifting off morning messages and into new tells that last into the closing bell. This second wave may require a rework of morning strategies that includes exiting early positions to avoid getting targeted by contrary price action.

Reading The Final Hour
Expect persistent intraday themes to reach their climax in the last hour, especially in the last 15 minutes. Index prices can surge much higher and lower during this period, with institutional capital coming off the sidelines, while algorithms work hard to shake out traders wanting to hold overnight positions. Market internals become your best friends at these critical junctures because they tell you what to expect into the closing bell. Numbers that expand or contract throughout the session predict that contrary strategies will fail, while mediocre numbers suggest a mixed close, with neither bulls nor bears happy about the outcome.

In Summary
Tape readers interpret complex background data during the market day to gain a definable trading edge over the competition. Through experience and skill, they react to environmental changes well before price movement awakens the sleeping crowd.

Alan Farley can be contacted at HardRight Edge

How to trade when your country is in an economic crisis ?
2