What Is Elliott Wave Theory, And How Do You Trade With It?

One of the most popular yet mystical technical chart analysis approaches is Elliott Wave Theory. Elliott Wave Theory is based on ideas developed by Ralph Nelson Elliott back in the 1930s. While some skeptics criticize the subjective nature of Elliott Wave trading, other traders swear by its general principles. Here’s a basic overview of Elliott Wave trading.
WHAT ARE ELLIOTT WAVES
The central idea of Elliott Wave Theory is that stock prices tend to move in the same patterns on different scales due to the psychology that drives market trading. Elliott theorized that the mass psychology of the collective group of investors that comprise the market is manifested repeatedly in the trading patterns of stocks. Elliott believed the same patterns can be seen in graphical representations of other mass decision-making trends as well, including fashion trends and traffic congestion.
The basic Elliott Wave pattern consists of a five-stage series of moves in the direction of the primary market trend, followed by a three-stage correction in the opposite direction. The first five waves in the primary direction are denoted as waves one through five and collectively called the Motive Wave. The three-wave correction is denoted as waves A, B and C and is collectively called the Corrective Wave. 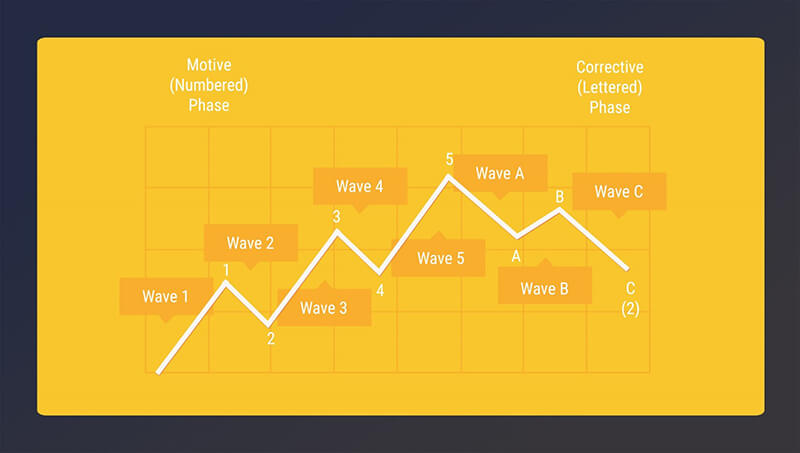 You can see on the chart above how the Motive Wave consists of higher highs and lower lows, and the Corrective Phase consists of lower highs and lower lows.
HOW THE WAVES ARE DETERMINED
There are three essential rules for Motive Wave formation:
In the end, a full Elliott Wave Cycle will appear as a series of three successively higher peaks and troughs followed by a series of two lower peaks and troughs. However, as long as the prevailing trend remains intact, chains of complete Elliott Wave Cycles can be strung together, each cycle continuing to push the price in the direction of the primary trend.
Elliott Wave cycles are also fractal in nature, meaning smaller cycles can occur within larger cycles if the time horizon is adjusted. The image below is a clear example of Elliott Wave cycles within other Elliott Wave cycles. 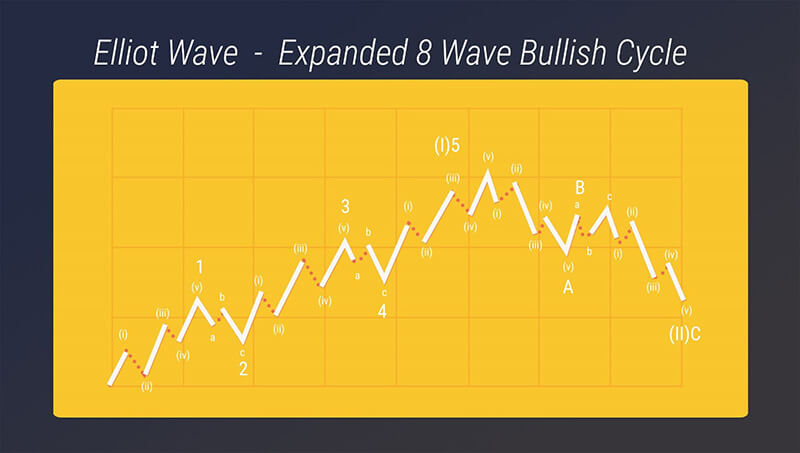 TRADING STRATEGIES VS. TRADING PATTERNS
It’s important to note that Elliott Wave Theory is a description of trading patterns, not an explicit trading strategy in itself.
Some traders attempt to catch every up and down swing in the Elliott Wave Cycle, while others keep it simple and wait for the first four waves of the pattern to form before attempting to capture only Wave 5 of the Motive Wave. Some traders ignore the individual waves and simply trade the Correction Wave, or look to buy the bottom of the Correction Wave to play the entire next Motive Wave.
Due to the subjective nature of Elliott Wave Theory, some traders are critical of the practice of Elliott Wave trading or find it too difficult or arbitrary to consistently apply. As always, traders who trade based on Elliott Wave Theory must identify a strategy that is best fit to their own personal strengths and skill sets, and they must remain consistent and disciplined in their trading approach.

Looks good but hard to apply profitably.
You must log in or register to reply here.

V
Elliott Wave, using MACD to determine the wave level, with and only unique

How To Improve Trading Psychology?