1 0
Here you can find stocks matching the stan weinstein system:

Also France, Spain and other countries...

Sorry I haven't been on here for a while. The scope of the method was too much for an individual thread anymore so I created a separate website for it a few years back here: https://stageanalysis.net/forum/index.php so that people can learn the method and discuss it in more detail, and there are now thousands of posts and marked up charts etc.

So all the recent questions have already previously been asked and answered on the website if you still need help.

Back to the task at hand. Here's the overview charts of the US Bullish Percent and Moving Average Breadth.

NOTE: the breadth continues to gradually weaken overall, although still in the bullish ranges. So nothing serious to note yet from the charts, but the S&P 500, Dow 30 and NYSE markets haven't followed the Nasdaq Composite to fresh continuations. So it is giving me some pause about the market health.

So taking into account the market breadth positions, I'm going to change my Stage rating for the US market to Stage 2B.


isatrader said:
One of the core components of Stan Weinstein's method is the use of Relative Performance compared to an index such as the S&P 500, to a sector or to another stock. Which was referred to in his book as Relative Strength.

However, this should not to be confused with the popular RSI (Relative Strength Index developed J. Welles Wilder), which is a momentum oscillator that measures the speed and change of price movements on a single stock. And so, to avoid any confusion when talking about the kind of Relative Strength we are interested in, I've renamed to be "Relative Performance".

Weinstein defines it as the following on page 18 of the book:

On here I have two ways of representing the Relative Performance on a chart. The first version I show is the representation that people are used to from the book (#1 on the below chart) which is the Mansfield Relative Strength Indicator. The second version that I show immediately below (#2 on the below chart) is the standard relative performance line that you get if you divide the closing price of the stock by the index that you want to reference, which in the majority of cases will be the S&P 500 Index unless otherwise stated.

So as you can see, these two indicators are identical, however, they show the Relative Performance data in slightly different ways, which I personally find useful to see. For example, the "zero line" on the Mansfield version is a flattened 52 week moving average which shows the data more like an oscillator and so is easier to see when it reaches extremes. However, on the standard relative performance line the slope of the 52 week moving average (zero line) can be seen, which can give further clues to the relative performance of the stock versus the index on a longer term basis.

Below is a weekly chart of Apple (AAPL) showing the two versions of the Relative Performance Indicator versus the S&P 500 Index.

The formula for calculating standard relative performance indicator is quite simple:


Code:
And then a 52 week moving average is added to the indicator to show the zero line.

So the longer version is:

The formula of this indicator is a bit more difficult than the regular Standard Relative Performance indicator:

So to make it a bit clearer:

I hope the above calculations all make sense, but if you need further assistance then chartmill.com did a good article on it which you can find here: ChartMill.Com | Articles on Technical Analysis Indicators and Screeners
Click to expand...

Could you please write this formula in Amibroker program? Thanks so much


joyman1710 said:
Could you please write this formula in Amibroker program? Thanks so much
Click to expand...

An area that I'm interested in doing more research at the moment is the Marine transportation sector. Currently sixth strongest over the last month, and with a large amount of very large Stage 1 bases, and weekly chart volatility contraction patterns over many months. Many stocks have appeared over the last month in my scans, and the sector ETF SEA made a small Stage 2A breakout this week. So I think it's a very interesting sector and worth further research.

Here's are some of the interesting stocks imo.

Gold and Gold Miners are another area of interest currently, with the spot gold chart near the top of it's range on the weekly chart, and the potential for a monthly Stage 2A breakout.

If we do see a new Stage 2 breakout then history suggests that the gold miners are a leveraged way to play it, especially the junior miners, which can have very big moves. So I've gone through the gold miners charts in the US and Canada to look for the stocks getting strong volume increases and that are in good shape for a potential move or already moving.

Here's the overview charts of the US Bullish Percent and Moving Average Breadth.

Note: Stage 3 is showing in all the major US markets now. Keep an eye on our leading breadth indicators, especially the Percentage of Stocks above their 150 day MAs in the various US markets which currently stand around the low 40% mark, which is the lowest level for years. So something I'll be keeping an eye on. 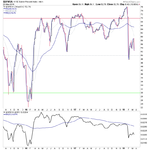 Here's an overview of what I'm seeing in the breadth charts overall.

NYSE Advance Decline Cumulative: Below a now declining 50 week MA. Made lower high recently. Not yet below February low though.

US New Highs - New Lows (5 day average): Below zero line again, and making new low, but still well above February low currently. So although negative, could also be a positive divergence if it doesn't get much worse, and price action rebounds at the test of the February lows.

i had not heard of these "NYSE Percentage of Stocks above" indicators before, thank you
C

2 0
Hi everyone..I just joined the community because of the great Weinstein thread... I am a great fan of his method especially for stock...even though I also use a few other things when trading futures...
Anyway, I hope to be around the forum.
Cheers!
C

2 0
Hi Isatrader, Your previous post on Marine Transport is interesting...
It seems that Kirby Corp. (KEX) is in stage 2... not sure if a or whatever..
what do you all think?