So, what you're really sayin' is

..is starting to unravel


I don’t know what’s wrong to be honest

Ten years in the planning

By the best psychopathic minds in the business

bought and paid for CDC, WHO, IMPERIAL COLLEGE and insiders

Army of useful idiots in uniforms and hazmat suits

still hasn’t convinced you that this flu

is more scary than normal flu

which kills more people than covid 19 every year

These are the current symptoms of coronavirus


However, I reserve the right to introduce new bogus symptoms that I will be adding to this list to try and scare those wandering out of their houses back into subservience.

Also you can expect past order takers like Theresa May, to be taken out of the toy box

dusted down and to start singing from the hymn sheet

Don’t worry, they will get round to resisting tyranny if the tyranny starts walking it back leaving the dangerous stuff to those too stupid to appreciate my soon to be increasing fake powers

Jake, as in Jacob


“The cases have in common overlapping features of toxic shock syndrome and atypical Kawasaki Disease, with blood parameters consistent with severe COVID-19 in children,” the warning reads. Symptoms including abdominal pain, gastrointestinal symptoms, and cardiac inflammation have been common for children with confirmed COVID-19 results as well as kids whose tests came back negative.

everything to do with covid19 (the flu)

at the same time

because black is white

and the truth is what ever I say it is

1- People are starting to see through this charade

(something that the hoaxers were obligated to do)

either way, waking up or not, it won't make any difference

Do you really think that after planning this for decades I'm gonna just walk this back because some people "are beginning to see through this charade"?

2- The gentleman in the video (and others)

Immunology 101 had no place in the simulation I did

Do I really need to spell it out?

Anyway, it was so nice chatting with you

Keep doing just exactly as you are doing

Just to remind you, we told you that if you started doing this we would bring in tougher measures

Most of you dillweeds don't really get this still

your old life is finished

we have trashed it

we are following a script

and that script will be implimented

You really think that it will all just blow over if you pretend it's not really happening?

That some good guys somewhere are going to step in and save the day?

A few people can see it

But that will not make any difference

You were warned for 19 years

because the message was too long

you preferred to attack the messengers

and there were many

you couldn't handle freedom and the responsibilities that came with it

Now reap what you have sown

Freedom won't even be remembered in history books

I would pity you

If I wasn't a psycopath
Last edited: Apr 29, 2020
Reactions: Signalcalc

Hope you're enjoying your demise

So here, once again is what you traded in your life for

these are the OFFICIAL KILLER BUG SYMPTOMS

Economic damage, meanwhile, is piling up around the world. The United Nations’ main labor body predicted the world will lose the equivalent of about 305 million full-time jobs in the second quarter. It also projected that 1.6 billion workers in the “informal economy,” including those working beyond the reach of the government, “stand in immediate danger of having their livelihoods destroyed.” That is nearly half the global workforce of 3.3 billion people.

(and a few million small businesses)

And don't forget the enforced lockdown and social distancing

Not bad for a small band of Jacobs

The mandated vaccine will wipe out about 6 billion of you

Turns out, that Matt Harmcock's legacy will over shadow Tony Blair by a very long way

In fact, the Jacobs will over shadow the Nazis by a very long way also

which is ironic really, although not as ironic as it seems, if you know your history

Still, he thought he was doing the right thing

Which is what all useful idiots think

Like all sociopaths, he will blot out the facts on the ground and carry on until somebody stops him

The domestic violence, stress, heart attacks, suicides, deaths of people too scared to go to hospital, or told they can't come..

..what does all that matter to Matt Harmcock?

All he has to do is tell you he too, has a 13 year old son and fake some emotion and most dillweeds will give him a pass

Without the lockdown more would have died

Neil Ferguson told him and who would ever doubt that guy?

Wait until you see the real Harmcock

Wonder how many more people will die between now and the next time we meet?

Until then, stay home and help keep those empty hospitals empty

BORIS JOHNSON is facing a legal challenge over the Government's decision to impose the UK-wide coronavirus lockdown.

Btw Neil, have you got a picture of your girlfriend... you know, for the 'story'?

I haven't got a girlfriend

Never mind , we'll get a pic of someone, don't worry

But won't you have to fake an upset husband story?

David Knight said:
Disposable useful idiot no longer protected by the state is taken out

Btw Neil, have you got a picture of your girlfriend... you know, for the 'story'?

I haven't got a girlfriend

Never mind , we'll get a pic of someone, don't worry

But won't you have to fake an upset husband story?

FFS, the UK contains THE BIGGEST bunch of hyprocrytical WANKERS on the planet, they can shove their lockdown, I'm off to the beach.

FFS, the UK contains THE BIGGEST bunch of hyprocrytical WANKERS on the planet, they can shove their lockdown, I'm off to the beach.
Click to expand...

FFS, the UK contains THE BIGGEST bunch of hyprocrytical WANKERS

by Sue Denim (not the author’s real name) [Please note: a follow-up analysis is now available here.] Imperial finally released a derivative of Ferguson’s code. I figured I’d do a review of it and send you some of the things I noticed. I don’t know your background so apologies if some of this is...

How to make sure you get the most inaccurate predictions possible

by Sue Denim (not the author’s real name) [Please note: a follow-up analysis is now available here.] Imperial finally released a derivative of Ferguson’s code. I figured I’d do a review of it and send you some of the things I noticed. I don’t know your background so apologies if some of this is...

How to make sure you get the most inaccurate predictions possible
Click to expand...

Incompetence at a national level. 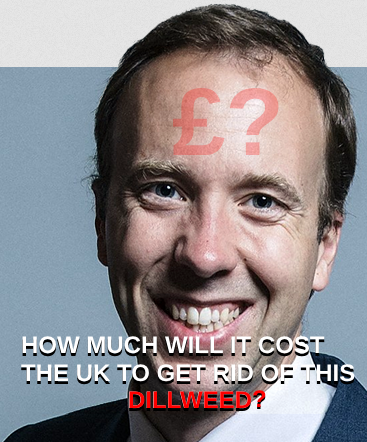 Who will they replace him with?

Signalcalc said:
Who will they replace him with?
Click to expand...

946 213
"This is also why protesting on the streets is the wrong approach. The best form of protest is non compliance and community support at a local level. Don't "protest" just Disconnect! "

Anyone who supports tracing, tracking, quarantine for the healthy, isolation, social distancing, clapping the NHS, forced vaccines and 'new normal'- you are with Gates and Fauci and the puppet government

You and them, are far more dangerous than any flu virus

946 213
If you go on the streets to protest, you play into the state's hands. You are effectively asking for the state to reverse a decision it has made over you.

The state does not own you. You are only free if you do not act like a slave. If you have to ask for permssion to be free, then you are not free.


If you have to ask for permssion to be free, then you are not free.


In the previous video, they are not protesting they are showing their public support. I would call it a peaceful demonstration of support. (not a protest, not a riot, not a rally, not a march) Hence no police intervention.and no violence.

You can be sure those police there and the court were taking note. This is exactly what they fear-peaceful non compliance, backed with legal challenge.

When you go down the protest route, you have allowed the state to keep holding power over you. The act of protesting has been constantly under attack from the state which demands that you inform it when you are going to protest. It is why Kettling has been used and why the police infiltrate the crowd and incite violence and use other tactics, such as escorting you to piece of wasteground where you can achieve nothing.

None of this need happen if you peacefully fail to comply with unjust demands. By protesting you are fighting back on the state's preferred terms.


Think back over the last year. How many banner waving activists have we all seen.? So many causes What has it all achieved? How many turned violent?

Already, the police are complaining that they are going to be unable to enforce the lockdown due to ever larger numbers ignoring it. Take that as a good sign. We can make that a much bigger problem for them very easily.

Don't wait for others, it is your freedom at stake your responsibility. Ignore those who pressure you to comply. We are fighting something much bigger than covid-19.

Other problems for the state - the truly independent, alternative medical opinion. The false case figures already admitted by the government. The reliance on compromised mathematical models.The mass media hysteria, the censoring of anything that contradicts the official narrative.

But there is an even bigger charge that can be levelled at them. One I believe that is pretty damning and revealing. One that, when it sinks in to the conscious of the majority of people, even those clapping the NHS, will unite enough people to turn this disaster around.