104 1
Which direction are we heading for GBPUSD now that BREXIT is done?
T

Nobody knows how price will behave but expect it to be driven long-term by the quality and detail of trade deals negotiated. Expect much volatility as news and rumours about various trade deals become public and of course as domestic political issues arise in the UK, France and Germany in particular.

tomorton said:
The UK has left the EU but continues to trade with the EU on existing terms until 31/12. Until then we're in the Transition Period.

Nobody knows how price will behave but expect it to be driven long-term by the quality and detail of trade deals negotiated. Expect much volatility as news and rumours about various trade deals become public and of course as domestic political issues arise in the UK, France and Germany in particular.
Click to expand...


>>>>> domestic political issues arise in the UK, France and Germany in particular. <<<<<

You left out Palestine. Shocking you didn't include Islam. Surely that would toughen up the equation.


Told Rambo McQueen to send the core 30 to Iraq for a stint for 2 years minimum.

Its not following the cat with the hottest hand in HISTORY.

Go to search engine, go to Advanced tab, then plug in GBPUSD in search box, then in member box plug in fibo_trader, then check mark DATE at the bottom and hit SEARCH.

After reading all the posts you will see that the great Fibo did the following:

(1) called the Sept 3/2019 bottom of GBPUSD
(2) called the rally and traingle of Oct - Nov 2019.
(3) warned that the next rally after the triangle would be a terminal wave and that a sharp reversal would follow
(4) warned that the reversal would dive bomb the triangle like a Hydrogen Bomb to the axis of the triangle
(5) alerted that after the dive bomb there would be a rally to around 50% retracement of the drop
(6) alerted that then would follow a C-wave down. No adjectives are necessary for a C-wave. They are already scary.
(7) alerted that the 200-day ema would be a rest station for refreshments and whisky
(8) alerted that GBP would retrace to at least 38.2% of the entire rally from Sept 3 to Dec 13. DONE on Friday Feb 7, 2020
(9) alerted that after the 200-day ema could still correct to the 50% and/or 61.8%.
(10) stated that, we will reevaluate when these things are happening/happened

tomorton said:
The UK has left the EU but continues to trade with the EU on existing terms until 31/12. Until then we're in the Transition Period.

Nobody knows how price will behave but expect it to be driven long-term by the quality and detail of trade deals negotiated. Expect much volatility as news and rumours about various trade deals become public and of course as domestic political issues arise in the UK, France and Germany in particular.
Click to expand...

This type of answer by a technician should be sent to Mother Superior for a solid thrashing to be be administered. Such technicians in Fibo's book are the types who are so shoddy that even with grace marks they still fail.

And let's not forget that this cat is the leader of T2W core engine of 30.

the move is Sept. 3 to Dec 13. As you can clearly see its a 5-wave move exactly as called yours truly. And the correction as called is an A-B-C .............. and obvious is that wave "B" is a traingle (see the sideways congestion recently shown by the blue lines on right)

6,513 114
See chart for the marked gold/yellow grids. Ther are 2. In a bout a week or so I willknow which of the 2 is the correct one, although it is highlyprobable that GBP is follwoing the smaller grid at extreme right.

If so then aside from the rest stations I already mentioned to TP partially, there is the very real TREND target of equality = 1.2594 or 1.2672.

Now note and carve this in your memory, take a look at the green line (200-day ema). When Price gets there there will for sure be a rally. Bug dig this, there is also a golden ratio level right there at that 200-day. This will add considerable uuuuuumph to the rally. If there is little or no uuumph then its all the more scary as its a 3rd wave of unusual power. So keep the 1H open for any surprises.

Tempted said:
Which direction are we heading for GBPUSD now that BREXIT is done?
Click to expand...

Disgraceful! You've been around 10 years and don't even know your own currency.

fibo_trader said:
Disgraceful! You've been around 10 years and don't even know your own currency.

its all over the place...

Tempted said:
its all over the place...
Click to expand...

Hardly! Its one of the best behaving currencies, 2nd only to the Euro. Its printing levels that are well within the technicals, nothing bombastic and unpredictable per se.

Tempted said:
its all over the place...
Click to expand...

Have not made a single change to the chart posted there days ago. Only new thing is the obvious trendline in red. How hard can that be? It gives a whole new meaning to "obvious"

Break the trendline, you TP. If not continue Short. How hard can that be?

In that thread I played the 5-min. frame but it is too time consuming given one has to go to sleep and all that nonsense. Higher timeframes dispense with that liability. I'm checking out 1H to see if it suits me, if not, it goes out the window too. Daily is wher the juice is at, big juice - can be done from the beach with no more than a few seconds glance 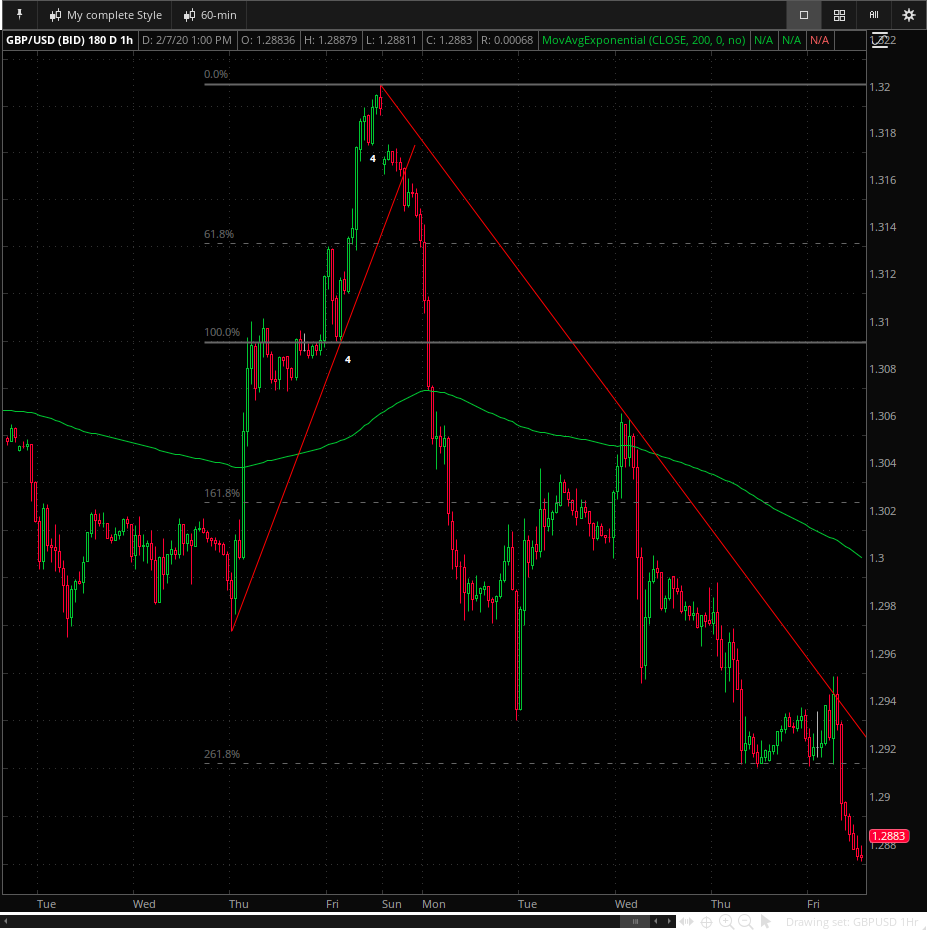 6,513 114
Obviously none of the duffers here have noticed the 5 subwaves in the 1H chart shown below. The 5th wave is ongoing and it could extend, tht's why I drew the trendline as the line in the sand.

If youdon't know what the waves mean, get a hold of the Duke of London. He can explain it to you. For all Iknow he is stil on the road in France li****g French p***Y and might never come back to shitty Blighty 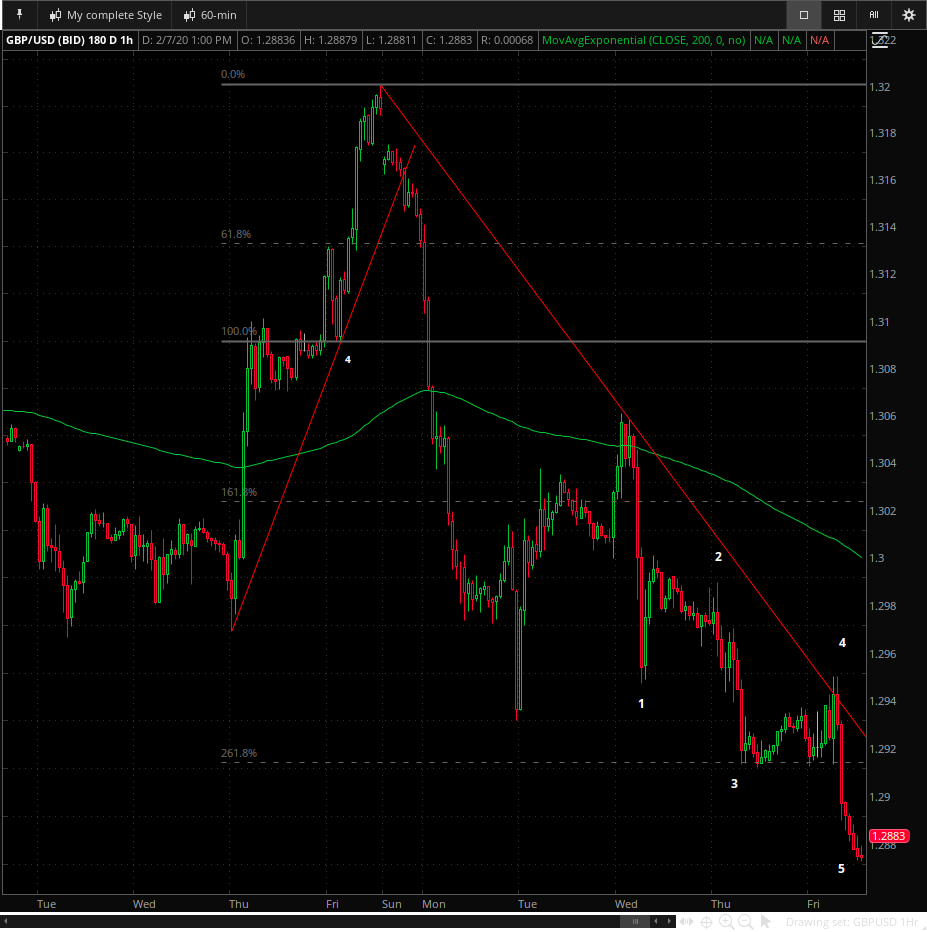 6,513 114
GBP can throw curveballs too and this one could very well be one, but Fibo is just too smart to miss somethng like this.

See the re-numbering of the waves as I place the 2 on the wave to the left. Now gives us an extended wave. But there are limitations. And a MAN must know his own limitations. And I have met mine and therefore let the trendline do its job of providing backup firepower, regiments of it. 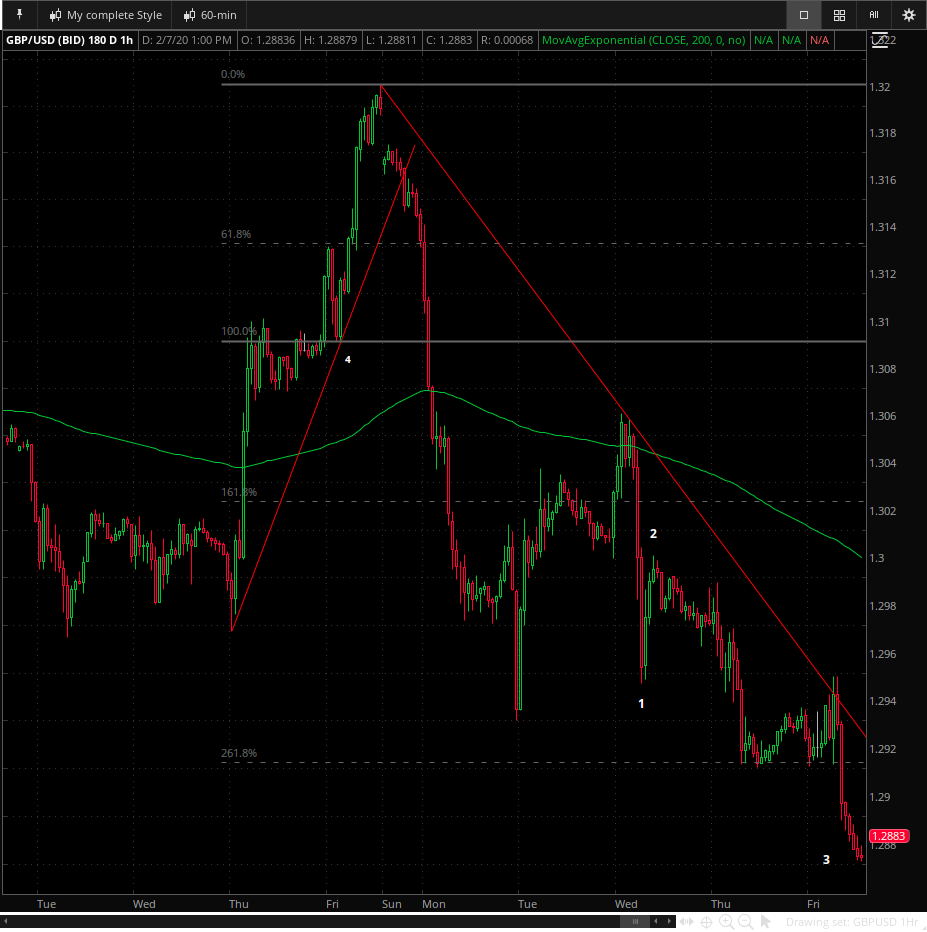 6,513 114
Rambo McQueen, the GBP market will tear your army a new AH and not only that, will put them in a chokehold so severe, so scary and so painful that it has the potential of putting their wives and kids out on the street at worst and at best not being able to pay the rent and milkman/

Compared to that, my slapping them around is mild. Keep that perspective.

I'm doing your pricks a favor even though NONE deserve it. Why? Stupidity is OK, no problem with fibo. But throw in false PRIDE and Fibo instantly wants to f**** 'em. FALSE PRIDE = trader's worst enemy. Even ISIS would be a better friend than false pride

6,513 114
Later alligators. If you don't see me here soon it means I've been sent as promised to Barbados for either 21 days or Life. If the latter, best of luck in DYING. Best advice? Get out now while you still can. The drug is too hard to beat and it will send you to a broke grave. Walk away!
You must log in or register to reply here.
Top Bottom
AdBlock Detected