Are tinfoil hats any protection from all these tanks being sent to Ukraine !

Revision:
Why Russia Miscalculated in Ukraine: A Self-Inflicted Disaster in Three Acts

How America's Abrams and Germany's Leopard 2 compare to Russia's tanks

Kremlin admits Wagner mercenary boss is at risk of assassination

The Union of Bundeswehr military personnel is an independent organization representing the interests of 200,000 active and retired soldiers and reservists

According to the minister, "it is to combat these unlawful and openly anti-Russian policies of the Ukrainian regime" and to prevent Ukraine from posing security threats to Russia that Moscow has been conducting its special military operation

Sounds like an instruction from the top. He must be seen as a threat.

counter_violent said:
Sounds like an instruction from the top. He must be seen as a threat.
Click to expand...

"Yes, I’m aware. The press service told me about it. That’s a very good idea. I agree that it’s time Prigozhin were eradicated. In the event they ask me, I will definitely provide assistance," Yevgeny Prigozhin said in a Telegram post

Kiev's Crimes Could Be Revealed By Its Own Agents

Foreign mercenary blackmailing the neo-Nazi regime to demand benefits. Written by Lucas Leiroz, researcher in Social Sciences at the Rural...

Ukraine, The Corruption Discovered Is Nothing But The Zelensky's Method

Written by Piero Messina What unites Sierra Leone, Zambia and Ukraine? The corruption. Now it will be a big problem...

Don't sanction Russia. We are doing nothing wrong !

The scandal could also explain why the Pentagon has been “unable” to track over $20 billion in weapons as the...

Very few in the US have admitted that they don't have the production capacity necessary to concurrently arm the Kiev regime and the government in Taipei.

In Video: How Russian Fighters Evacuated Civilians During Battle For Soledar

Update for January 25, 2023:
- West pledges main battle tanks to Ukraine + Myanmar’s upcoming elections targeted by US-backed terrorism.
- Western media reports resignation of several high-level Ukrainian officials;
- The US and Germany have pledged the M1 Abrams and Leopard 2 main battle tanks;
- Western military experts explain that Western main battle tanks require large logistical support, years of training for a foreign army to adopt them, and have intense maintenance requirements;
- ATACMS exist in much small numbers;
- Ukraine admits Russia has adapted to HIMARS GMLRS rockets, making it likely that Russia will adapt to ATACMS;
- Conversely, Russia has effectively forced Ukraine’s rear areas into neighboring countries with its missile forces;
- The US has announced increase artillery shell production to 90k shells/month in 2 years a month, roughly half of what Ukraine uses in 15 days;
- As the US wages proxy war in Ukraine against Russia, it does so in Myanmar against China;
- US-backed opposition is using terrorism to impede elections in Myanmar;

counter_violent said:
Don't sanction Russia. We are doing nothing wrong !

Putin said that sanctions will strengthen Russia
Click to expand...

So, if he doesn't want his neighbors to sanction Russia, and sanctions will strengthen Russia, I can only conclude he wants to weaken Russia! 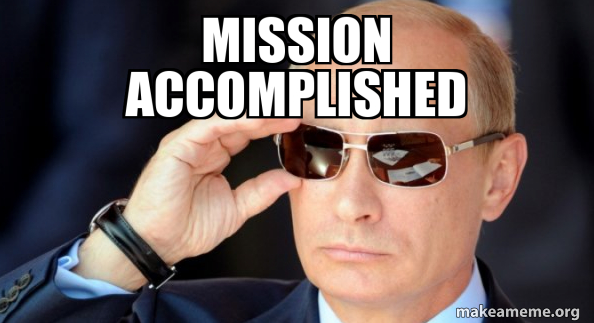 BORIS BONDAREV: We all need to stop pretending. Europe is at war

Rufus_Leakey said:
From the video


So, if he doesn't want his neighbors to sanction Russia, and sanctions will strengthen Russia, I can only conclude he wants to weaken Russia!

Nobody but Putin would go "all in" with a pair of deuces.

Tim tells us that the only clown is president of Ukraine.

Russia will soon become the center of European civilisation.

On January 5, Florian Philippot called on French President Emmanuel Macron to refuse from plans of sending weapons to Kiev, saying that it would weaken the French army and would not help stop the conflict

F-16 fighter jets, if supplied to Kiev, will be downed and studied — DPR source

"If need be, a corresponding section of the ‘ger zone’ may be mopped up and become our territory," he said

According to the source, the window of opportunities for the Ukrainian army "has already closed"

Mass demonstration against supplies of tanks to Ukraine held in Munich

Hundreds of people marched along the city accompanied by drummers