You are using an out of date browser. It may not display this or other websites correctly.
You should upgrade or use an alternative browser.
G

0 0
The recent rally has been based on famous hedge fund managers suggesting 1% of net worth should go into Crypto space. What the bulls seem to have forgotten is hedge funds are smarter than long only strategies. They will have a trading desk to implement shorts as well as longs. The digital tulips could crash after this wave of institutional buying reverts to shorting the excessive price moves.
L 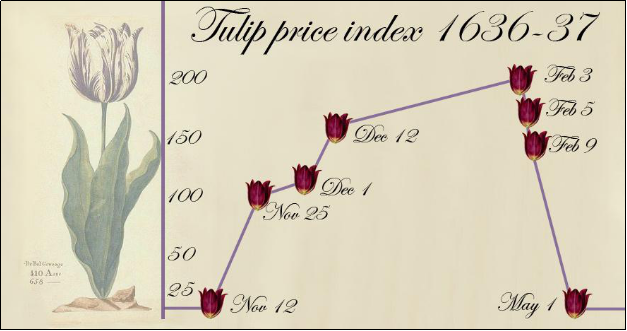 If you happen to be interested in Tulip-land and its role in the development of stock exchanges and speculation, I have a pdf of Josseph de la Vega's "Confusion de Confusiones" - in the original Spanish, alas. If that's not your cup of tea, I believe there's an English version out there somewhere. I also have two papers (pdf) in English concerned with the Amsterdam stock exchange:
a. Gelderblom, Junker - Amsterdam as the Cradle of modern futures and options trading
b. Petram,L.O - The world’s first stock exchange
Reactions: vik22
G

0 0
Interesting I don't speak the Spanish. I have simply read Extraordinary Popular Delusions and the Madness of Crowds
G

0 0
Fiat currency is used to price almost all assets relative foreign currency values, bonds, equities, housing and cash. Why do people think that BTC is going to replace fiat currency? The central banks are already working on central bank digital currencies. I am sure they will introduce them with caps ie. $2,500 max holding in wallet. And it will enable helicopter money in the future.

0FXTrader0 said:
Why do people think that BTC is going to replace fiat currency?
Click to expand...

Because BTC is decentralized.

There is no central bank to collapse.
It can't be deflated, created or destroyed at whim or hyperinflated by economic policy.
Nor can it be confiscated, blocked or frozen.

Which is why many millions choose to use it in preference to Fiat foney money.


These very things are the also same reasons why those very people won't switch to Central Bank fake digital alternatives.

Because those alternatives will come complete with all the failings of Fiat Currency built-in.

Free the World - Use cryptocurrency.

0 0
Another thing BTC uses tonnes of energy to mine which is not good for the environment if it was to replace fiat the amount of transactions would destroy our planet.

If worries about inflation you park your fiat in stocks, art, rare cars or property and hold little cash.

Why are bond investors ready to lock in negative rates on there cash if they thought it was going to be replaced they would want a risk premium.

0FXTrader0 said:
Another thing BTC uses tonnes of energy to mine which is not good for the environment if it was to replace fiat the amount of transactions would destroy our planet.
Click to expand...

One should really do some basic research before making sweeping statements.

Do that, and you'll quickly discover that the amounts of energy involved in 'mining' BTC pale into piddling insignificance when compared to the amounts expended in mining traditional stores of value such as precious metals.

Digging humongous country-sized holes in the planet and processing mountain ranges of ore to extract and refine a few kilograms of the desired precious material is hardly environmentally friendly.

Whilst that doesn't make cryptocurrency the savior of the environment, it certainly makes it the lesser evil by a considerable margin. Probably the 'least worst' option, as far as choices go.

Save the Planet - Use cryptocurrency.

0 0
I forgot to mention commodities as inflation hedge. But the bigger question is why would the digital tulip coin replace what we already have that has served us well throughout the ages coin issued by the sovereign government.
B

0FXTrader0 said:
replace what we already have that has served us well throughout the ages coin issued by the sovereign government.
Click to expand...

Do we live on the same planet ?

Fiat currency is NOT issued by the sovereign government.
That's why governments have to BORROW money at interest from Central Banks.

May I suggest you please educate yourself of some basic monetary facts before posting any further nonsense.

It does not reflect well on T2W when frequent posters make such elementary false statements.


By the way, the average lifespan of a fiat currency throughout the ages as you phrase it, is a mere 41 years from adoption to collapse and economic ruin (and all the war/famine/ poverty/ social unrest etc. that goes with it). If this is your interpretation of being well served then I dread to imagine what poorly served might be !!

They are neither owned by, nor do they answer to, sovereign governments.

They don't issue currency on behalf of the government, they simply issue the only currency that is decreed as legal tender by the government.
You must log in or register to reply here.

D
New Paper Suggesting BTC is a Prototype to be Replaced

Options May 1, 2018
optionstrategies18
O
M
Is it Historic-Time to Take Profit and Hedge OR jusPrepare to Trade on the Bear Side?