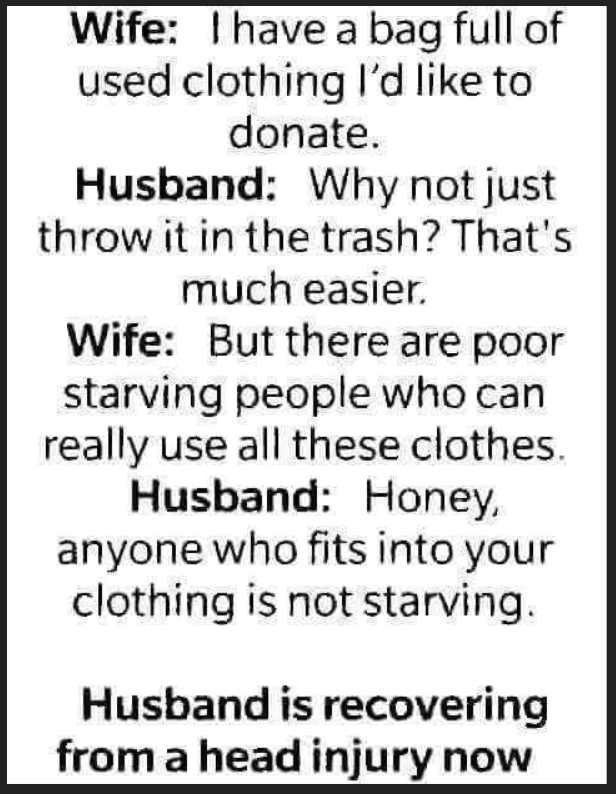 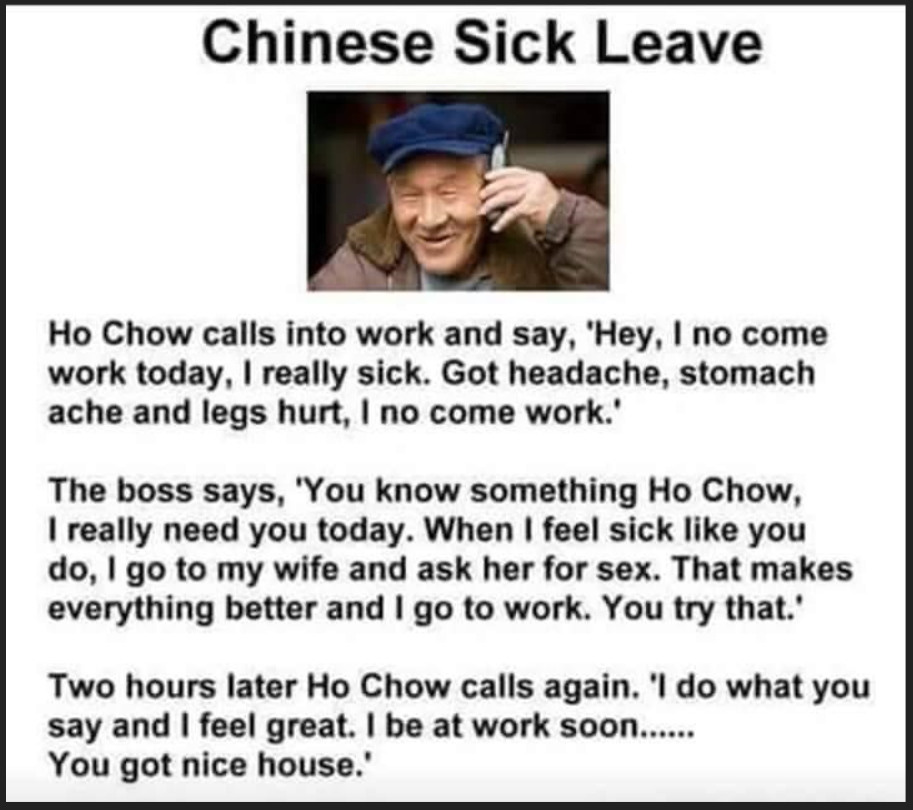 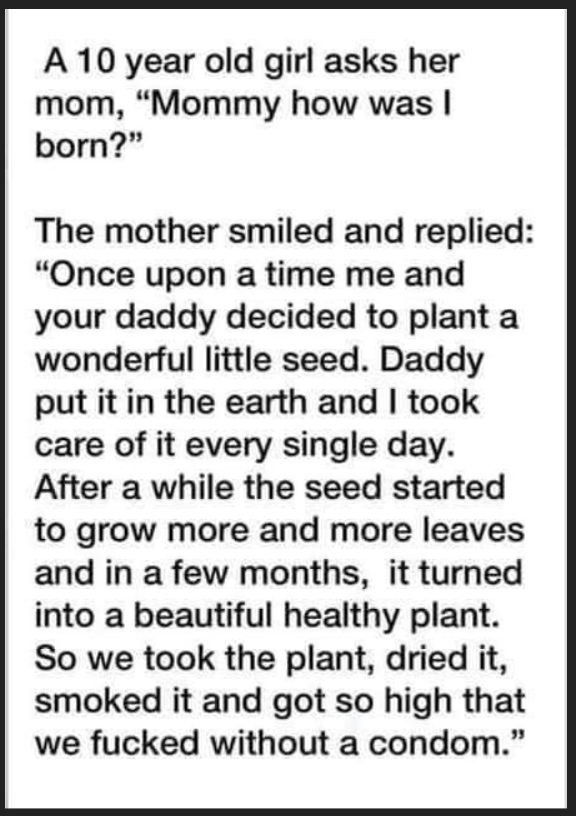 13,996 1,442
Ten years later, at age 90, the friends discussed where they should meet for lunch. Finally it was agreed that they would meet at Wetherspoons in Alfreton - because the 2 remaining friends could get their kids to drive them there and back..​

13,996 1,442
It was this guy's birthday the other day and do you know what; his wife completely forgot his birthday.. At work nobody wished him a happy birthday but on the way home in the bus this gorgeous girl sat next to him. They got chatting and she heard his story and wished him a Happy Birthday and would he like to drop in at her place before going home. He was so pleased he said yes please.
They got to her home she sat him down with a drink and asked him if he minded if she went into the bedroom for a minute.
The door of the bedroom suddenly burst open and there were his wife, his work colleagues and his best mate Jack. All shouting happy birthday while he had stripped off and was lying naked on the couch in anticipation.
Reactions: Oscar Reed and Atilla

10,362 1,595
An old Doberman starts chasing rabbits and before long, discovers that he's lost.

Wandering about, he notices a lion heading rapidly in his direction with the intention of having lunch.

Noticing some bones on the ground close by, he immediately settles down to chew on the bones with his back to the approaching cat.

Just as the lion is about to leap, the old Doberman exclaims loudly,

"Boy, that was one delicious lion! I wonder, if there are any more around here?”

Hearing this, the young lion halts his attack in mid-stride, a look of terror comes over him and he slinks away into the trees.


"Whew!," says the lion, "That was close! That old Doberman nearly had me!”


Meanwhile, a squirrel who had been watching the whole scene from a nearby tree, figures he can put this knowledge to good use and trade it for protection from the lion. So, off he goes.

The young lion is furious at being made a fool of and says, "Here, squirrel, hop on my back and see what's going to happen to that conniving canine!”
Now, the old Doberman sees the lion coming with the squirrel on his back and thinks, "What am I going to do now?," but instead of running, the dog sits down with his back to his attackers, pretending he hasn't seen them yet, and just when they get close enough to hear, the old Doberman says……..

"Where's that squirrel? I sent him off an hour ago to bring me another lion!”


Moral of this story…

Don't mess with the old dogs... Age and skill will always overcome youth and treachery!

Bull Shit and brilliance only come with age and experience.

If you don't send this to two 'old' goats right away, there will be two fewer people laughing in the world.

Of course, I am in no way insinuating that you are old, just 'youthfully challenged’.
Reactions: Atilla, member275544 and cantagril

19,101 2,701
Went to the doctors and said I was suffering from Premature Ejaculation. He asked "How does your wife feel about it?" I said "She took it on the chin the first time but now its getting on her tits"

13,996 1,442
A lady about 8 months pregnant got on a bus she noticed the man opposite her was smiling at her. She immediately moved to another seat. This time the smile turned into a grin, so she moved again. The man seemed more amused. When on the fourth move, the man burst out laughing, she complained to the driver and he had the man arrested. The case came up in court. The judge asked the man (about 20 years old) what he had to say for himself. The young man replied, Well your Honor, it was like this: When the lady got on the bus, I couldn't help but notice her condition. She sat down under a sign that said, "The Double Mint Twins are coming" and I grinned. Then she moved and sat under a sign that said, "Logan's Liniment will reduce the swelling", and I had to smile. Then she placed herself under a deodorant sign that said, "William's Big Stick Did the Trick", and I could hardly contain myself. BUT, Your Honor, when she moved the fourth time and sat under a sign that said, "Goodyear Rubber could have prevented this Accident", I just lost it. "CASE DISMISSED!"​

19,101 2,701
This is Absolutely Brilliant..I don't think I've ever heard a concept explained scientifically better than this...Well you see, it's like this...

A herd of buffalos can only move as fast as the slowest buffalo?

And when the herd is hunted, it is the slowest and weakest ones at the back that are killed first.

This natural selection is good for the herd as a whole, because the general speed and health of the whole group keeps improving by the regular killing of the weakest members.

In much the same way, the human brain can only work as fast as the slowest brain cells.

Now, as we know, an excessive intake of alcohol kills brain cells.

But naturally, it attacks the slowest and weakest brain cells first.

In this way, regular consumption of alcohol eliminates the weaker brain cells, making the brain a faster and more efficient machine.

And that's why you always feel smarter after a few drinks....

13,996 1,442
A policeman pulled a car over and told the driver he had won $5,000 dollars in the seatbelt competition. "What are you going to do with the money?" asked the policeman.

"Well, I guess I'm going to get a drivers license", he answered.

"Oh, don't listen to him," said a woman in the passenger seat, "He's a smart aleck when he's drunk."

Then the guy in the backseat said, "I knew we wouldn't get far in a stolen car."

At that moment there was a knock from the trunk and a voice said, "Are we at London Bridge yet ?"

7,123 1,899
A store has just opened in New York City that offered free husbands. When women go to choose a husband, they have to follow the instructions at the entrance: “You may visit this store ONLY ONCE! There are 6 floors to choose from. You may choose any item from a particular floor, or may choose to go up to the next floor, but you CANNOT go back down except to exit the building!"

So, a woman goes to the store to find a husband. On the 1st floor the sign on the door reads: Floor 1 - These men Have Jobs.

The 2nd floor sign reads: Floor 2 - These men Have Jobs and Love Kids.

The 3rd floor sign reads: Floor 3 - These men Have Jobs, Love Kids and are extremely Good Looking. “Wow,” she thinks, but feels compelled to keep going.

She goes to the 4th floor and sign reads: Floor 4 - These men Have Jobs, Love Kids, are Drop-dead Good Looking and Help With Housework. “Oh, mercy me!” she exclaims. “I can hardly stand it!”

Still, she goes to the 5th floor and sign reads: Floor 5 - These men Have Jobs, Love Kids, are Drop-dead Gorgeous, help with Housework and Have a Strong Romantic Streak.

She is so tempted to stay, but she goes to the 6th floor and the Sign reads: Floor 6 - You are visitor 71,456,012 to this floor. There are no men on this floor. This floor exists solely as proof that you are impossible to please. Thank you for shopping at the Husband Store.

To avoid gender bias charges, the store’s owner opened a Wife Store just across the street.

The 1st first floor has wives that love sex.

The 2nd floor has wives that love sex, and have money.

The 3rd through 6th floors have never been visited....
Reactions: NVP, trendie, Atilla and 1 other person