409 587
Here we have a really long native trackrecord by old friend @Pulse07 !
One of the best performers of my portfolios!
Let's go @Pulse07 you can link your old topic to the new one!
Reactions: VolcanoFX and Pulse07

4 13
Thanks for introducing my darwin PUL.
Thank you also to you and everyone who helped move our community here.
I'll post a description when I have more time.
Questions and constructive criticism are welcome on this topic.
Reactions: VolcanoFX, hefoba and CavaliereVerde

409 587
Congrats for PUH !
Last 6M are impressive , a darwin that grows smooth like a darwin portfolio.
Real high degree of internal diversification!

Thank you.
I have worked a lot on PUH this year and I think I have improved it considerably.
But conditions are favorable for my strategies at the moment, this is probably mainly what explains the current performance.
We will see how PUH will behave when the conditions deteriorate but what is certain is that the progression will not remain so smooth indefinitely.
.
PUH synthesizes all of my work.
It therefore contains my future successes but also the failures.
So its evolution is faster than all my other darwins since I work permanently on at least one of the strategies it contains.
I hope I can see an improvement over time, which will mean that my work is paying off.
Last edited: Oct 17, 2020
Reactions: CavaliereVerde, TrungLN and VolcanoFX

Here is a description of the underlying strategy of PUL.
Sorry for the delay, unfortunately my schedule is very busy.
I may add more detail later.
But feel free to ask questions, I would be happy to answer them, but maybe with a little delay. 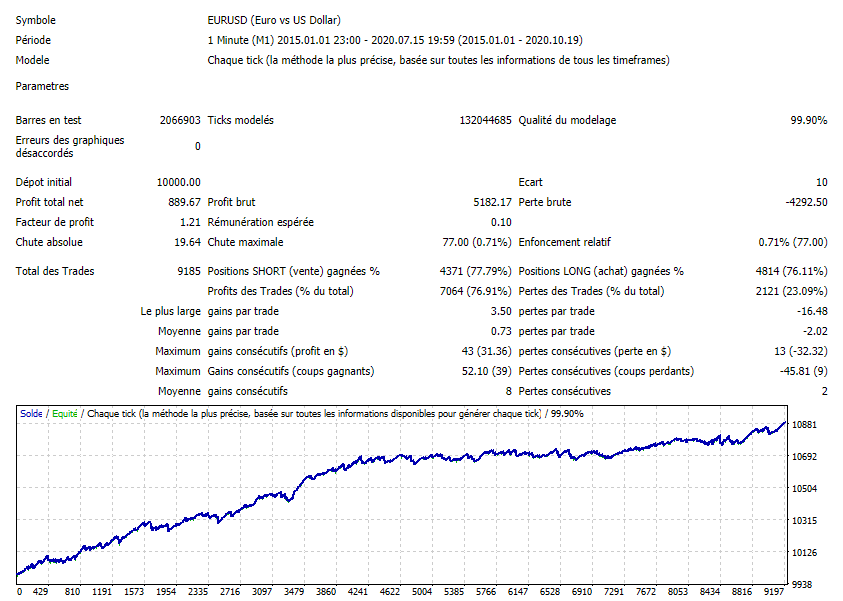 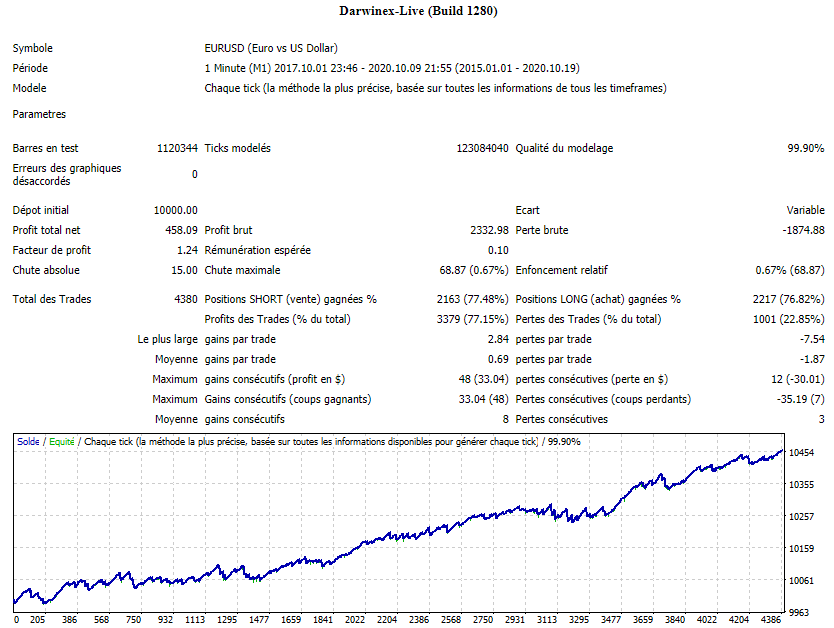 Backtest done with tick data suite (0.01 lots per trades).
I rely on the last 5 years to update this strategy, but I still check that their behavior is correct over a longer period.

This backtest corresponds to the stategy as it is now but the settings are adjusted at least once a year.
Usually I adjust the settings of all my strategies at the start of each year and also following an unusual drawdown.

For example, I adapted this strategy following the drawdown related to COVID-19.

Stop-loss for each trade.

Maximum excursion per position : 10%.
The strategy no longer opens trade if the stop loss of the existing trades and the one to open could exceed this limit.

Maximum loss by sliding 24h : 10%
The expert advisor stops opening trades when this limit can be reached, so that even if all the trades in progress ended on stop-loss this limit can not be reached.
This does not mean that this strategy will steadily risk 10% in a day.
On the contrary, this protection is supposed to never be used, it serves as a fuse in case things turn worse than expected.

All trades are closed before week-end.


EXPECTATIONS (for the underlying strategy) :

- Average yearly profit aimed : 15%.
This is a rather pessimistic estimate which takes into account the backtests and also the difficulties that the strategy has encountered so far which have led to adaptation.
It is not a promise, just an indicative value.

- Maximum lifetime drawdown aimed : 30%
The lots size is defined according to the results of the backtest and forward test so that the drawdown never exceeded 15% until today.
But I rely on 30% to leave a margin of safety.

If the stategy exceeds the 15% drawdown, the size of the lots is gradually reduced in order to keep the target drawdown of 15%.
At this point, if I haven't already, I'm focusing my work on this strategy to try to figure out what's wrong.
But I didn't make any changes in a rush.
As the risk decreases as the drawdown increases, I can take my time to study the situation quietly.
If I could no longer adapt the strategy, and the expected return becomes too low compared to the drawdown, the strategy would be paused or replaced by another.
Before that, I'll let the investors know here as well as on the Darwin page so they can decide what to do.

ABOUT MY OTHER DARWINS

All my strategies are managed in a manner similar to PUL.
The target risk is still 30% drawdown, but other parameters vary.

Note that this was not always the case, some darwins which were then in development did not have serious money / risk management at certain times (this is the case for PUH for example).
It was a mistake to do this because it might give the impression that I could do the same on my other darwins.
But that won't happen again, even for my darwins in development.

For darwins containing more than one strategy, the management remains the same except that a fair share of the equity is attributed to each of them.
But in this case, the risk can then be increased depending on the diversification.

Have a nice day.
Last edited: Tuesday at 10:55 PM
Reactions: hefoba, KlondikeFX, TrungLN and 2 others

26 37
Even a pro like you, big drawdown still occurred.
It seems that it's an essential stage every traders have to deal with.
Reactions: Pulse07 and CavaliereVerde

TrungLN said:
Even a pro like you, big drawdown still occurred.
It seems that it's an essential stage every traders have to deal with.
Click to expand...

First of all, let me point out that trading is not my main activity at all.
I am a business owner in a field that has nothing to do with trading.
My professional activity takes me a lot of time, but I always have a few hours left to devote to my strategies each week, at least for their follow-up.
In addition, my schedule regularly leaves me significantly calmer for long periods, which allows me to work more in depth.
I don't see this lack of time as a handicap, because I have a very long-term view of trading.
This gives me the opportunity to make small improvements or updates on a regular basis and to be able to observe quietly how they materialize.
In addition, it is much more comfortable to have a stable income, independent of what trading brings to me, it allows me to apprehend the difficult periods serenely.
Anyway, whatever future performance I get with my strategies, I have no intention of abandoning my main activity anyway.
For the simple reason that I enjoy doing my job.
This is not completely ruled out but not until the distant future.

With regard to the question of drawdowns, I have a lot to say on the subject, but unfortunately I don't have time to elaborate enough now.
But I sure would have time by the end of the week.
Reactions: TrungLN and CavaliereVerde
You must log in or register to reply here.