Point-and-figure (P&F) charts have been a part of the technician’s toolbox for more than a century. They were used by Charles Dow in the late 1800s and Victor deVilliers published the first detailed explanation of this technique in 1933 in his book, “The Point & Figure Method of Anticipating Stock Price Movements”. P&F charts track only price changes and ignore time. Proponents of this technique believe that focusing solely on price changes eliminates day-to-day market noise. By ignoring smaller movements, traders believe that it should be easier to identify significant support and resistance levels. In this article we’ll introduce you to several popular P&F patterns that may be useful in identifying potential breakouts.

Using a Traditional Tool
The simplest trade signals on a P&F chart are double tops and double bottoms (Figure 1). A double top buy signal occurs when a column of Xs, which are used to note rising prices, exceeds the top of the previous X column. A double bottom sell signal is given when a column of Os, which show declining prices, falls one box below the previous O column.

Only three columns are required to identify a double top or double bottom. These signals show only that the stock price has reached a higher high or lower low and that the momentum is likely to continue in the direction of the breakout. They are very useful for spotting the short-term trend and identifying stocks that have just broken out of a consolidation pattern.

Another nice feature of P&F charts is that stop-loss points are easily identified. In the case of the simple patterns we are talking about, a trader could place a stop order just below the price where the breakout occurred. If it is a false breakout, the stock will quickly return to the congestion zone, below the new high indicated by the double top or above the new low indicated by the double bottom. In either case, the loss is limited to only a few points.

The Triple Top / Bottom
A more complex buy signal is the triple top, in which a column of Xs rises above two previous X columns. This means that the bulls were unable to push the price above a certain price level on two separate occasions in the past and signals the momentum is strong.

On the other hand, the triple bottom sell signal results from a column of Os falling below two previous columns of Os (as seen in Figure 2). These patterns require at least five columns to form, and more columns in P&F patterns indicate larger price targets because the breakouts tends to be more dramatic.

After one of the mentioned patterns signals a buy/sell sign, the next step is to determine a strategic price target. One common method for choosing a target is to multiply the number of columns within the congestion pattern and to multiply that number by the box size (the minimum price change that must occur for a given period before an X or O is added to the chart). For example, as you can see from the chart below, a trader can see that the pattern is six columns wide, and each box represents a move of 0.50. The $3 target for this move exceeds the risk by a factor of three to one, making this an attractive trade. 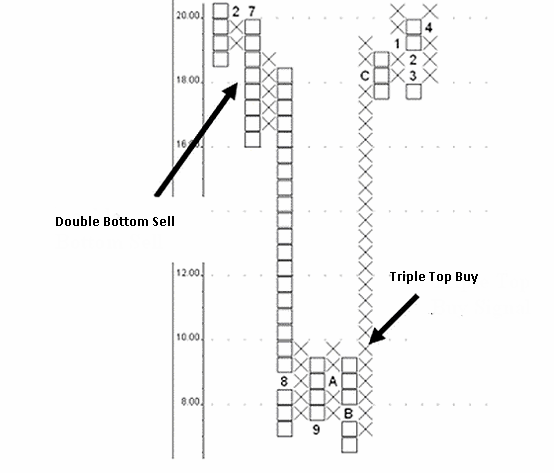 Figure 3 also demonstrates the application of P&F patterns as a trading strategy. A double bottom sell signal is given near $18. Traders could act on that signal by closing long positions, selling short, or buying put options. At a minimum, traders should consider closing long positions when the P&F chart is on a sell signal. This type of chart is designed to filter out market noise, and is expected to reliably show changes in the trend. A trader is someone seeking quick profits, and should be holding stocks that are in confirmed uptrends.

Short Selling to Profit
It is possible that aggressive traders would want to sell the stock short on this sell signal, which means selling a stock they do not own. To do this, the trader must use a margin account and face a great deal of risk. When opening a short position, traders hoping to profit from price declines borrow the stock before they can sell it. They will need to repay the stock at a later date, and are responsible for paying any dividends that the stock earns and a borrowing cost, which is similar to interest. If the price goes higher, short sellers need to buy the stock back to cover their losing positions. The potential loss of a short position is unlimited, while the gain is limited because a stock price can never go below zero.

Buying a Put Option
A more conservative strategy for profiting from sell signals is to a buy a put option on the stock. In this strategy, traders profit from price declines while enjoying the protection of limited risk because they can only lose the amount they spent to purchase the option.

P&F a Useful Tool
Any of these strategies would have been successful in the scenario shown in Figure 3 because the stock went straight down from the double bottom sell signal and fell more than 50% over the next month. The long-only trader would have sold about 10% from the highest price reached in the previous rally. The short seller and option buyer would have profited and taken short-term profits, but the question is when they would have closed their positions.

The P&F chart is especially useful for showing when the trend is changing. After the rapid decline, this stock entered a consolidation phase, which lasted more than four months. The chart shows congestion, marked by directionless trading. The first signal with follow-through is a bullish triple top signal. This signal is clearly marked in Figure 1 and occurs near a price of $9.50. This is a signal to the short trader to take profits and close the position.

The long-only trader would act on this signal and watch his position double in value fairly quickly. Options traders would buy calls on this stock and enjoy an even greater gain from the leverage inherent in options.

In Summary
Experienced traders are aware that not all P&F signals will work out as well as the two in our example. In fact, experience will show that simple P&F patterns will work about half the time. A great feature of P&F analysis is that traders can easily use congestion zones that precede the signal to identify stop-loss points, and in this way limit their losses when the signal fails.

Traders relying solely on simple P&F signals, however, may be disappointed with their results. Experienced traders prefer the triple top buy signal, which often outperforms the market. Perhaps the best use for P&F charts is for traders to employ them as part of a trading strategy, for example assessing the overall trend from the most recent signal and accepting trades based on another indicator, such as an oscillator like the relative strength index (RSI).

Michael Carr can be contacted at Dunn Warren

He is also the author of "Smarter Investing in Any Economy: The Definitive Guide to Relative Strength Investing"

Do day trading patterns work because others are also using them?