The Ichimoku Kinko Hyo or equilibrium chart isolates higher probability trades in the forex market. It is new to the mainstream, but has been rising incrementally in popularity among novice and experienced traders. More known for its applications in the futures and equities forums, the Ichimoku displays a clearer picture because it shows more data points, which provide a more reliable price action. The application offers multiple tests and combines three indicators into one chart, allowing the trader to make the most informed decision. Learn how the Ichimoku works and how to add it to your own trading routine.

Getting to Know Ichimoku
Before a trader can trade effectively on the chart, a basic understanding of the components that make up the equilibrium chart need to be established. Created and revealed in 1968, the Ichimoku was developed in a manner unlike most other technical indicators and chart applications. Usually formulated by statisticians or mathematicians in the industry, the indicator was constructed by a Tokyo newspaper writer named Goichi Hosoda and a handful of assistants running multiple calculations.What they came up with is now used by many Japanese trading rooms because it offers multiple tests on the price action, creating higher probability trades. Although many traders are intimidated by the abundance of lines drawn when the chart is actually applied, the components can be easily translated into more commonly accepted indicators

Essentially made up of four major components, the application offers the trader key insight into FX market price action. First, we’ll take a look at both the Tenkan and Kijun Sens. Used as a moving average crossover, both lines are simple translations of the 20- and 50-day moving averages, although with slightly different time frames.

1. The Tenkan Sen – Calculated as the sum of the highest high and the lowest low divided by two. The Tenkan is calculated over the previous seven to eight time periods.

2. The Kijun Sen – Calculated as the sum of the highest high and the lowest low divided by two. Although the calculation is similar, the Kijun takes the past 22 time periods into account.

What the trader will want to do here is use the crossover to initiate the position – this is similar to a moving average crossover. Looking at our example in Figure 1, we see a clear crossover of the Tenkan Sen (black line) and the Kijun Sen (red line) at point X. This decline simply means that near-term prices are dipping below the longer term price trend, signaling a downtrending move lower.

Now let’s take a look at the most important component, the Ichimoku “cloud”, which represents current and historical price action. It behaves in much the same way as simple support and resistance by creating formative barriers. The last two components of the Ichimoku application are:

3. Senkou Span A – The sum of the Tenkan Sen and the Kijun Sen divided by two. The calculation is then plotted 26 time periods ahead of the current price action.

4. Senkou Span B – The sum of the highest high and the lowest low divided by two. This calculation is taken over the past 52 time periods and is plotted 26 periods ahead.

Once plotted on the chart, the area between the two lines is referred to as the Kumo, or cloud. Comparatively thicker than your run-of-the-mill support and resistance lines, the cloud offers the trader a thorough filter. Instead of giving the trader a visually thin price level for support and resistance, the thicker cloud will tend to take the volatility of the currency markets into account. A break through the cloud and a subsequent move above or below it will suggest a better and more probable trade. Let’s take a look Figure 2’s comparison.

Taking our USD/CAD example, we see a comparable difference between the two. Although we see a clear support at 1.1522 in our more standard chart (Figure 2), we subsequently see a retest of the level. At this point, some trades probably will be stopped out as the price action comes back against the level, which is somewhat concerning for even the most advanced trader. However, in our Ichimoku example (Figure 3), the cloud serves as an excellent filter. Taking the volatility and apparent take back into account, the cloud suggests a better trade opportunity on a break of the 1.1450 figure. Here, the price action does not trade back, keeping the trade in the overall downtrend momentum.

Last is the Chikou Span. Seen as simple market sentiment, the Chikou is calculated using the most recent closing price and is plotted 22 periods behind the price action. This feature suggests the market’s sentiment by showing the prevailing trend as it relates to current price momentum. The interpretation is simple: as sellers dominate the market, the Chikou span will hover below the price trend while the opposite occurs on the buy side. When a pair remains bid in the market or is bought up, the span will rise and hover above the price action.

Putting It All Together
Like everything else, there’s no better substitute for learning but through application. Let’s break down the best method of trading the Ichimoku cloud technique.

Trading The Cloud…
Taking our U.S. dollar/Japanese yen example in Figure 4, we’ll zoom in on a more recent scenario in Figure 5. With the currency pair fluctuating in a range between 116 and 119 figures for the beginning of the year, traders were anxious to see a break out of the persistent range. Here, the cloud is a product of the range-bound scenario over the first four months and stands as a significant support/resistance barrier. With that established, we look to the Tenkan and Kijun Sen. As mentioned before, these two act as a moving average crossover with the Tenkan representing a more short-term moving average and the Kijun acting as the base line. As a result, the Tenkan dips below the Kijun, signaling a decline in price action. However, with the crossover occurring within the cloud at Point A in Figure 5, the signal remains unclear and will need to be clear of the cloud before an entry can be considered. We can also confirm the bearish sentiment through the Chikou Span, which at this point remains below the price action. Conversely, if the Chikou was above the price action, it would confirm bullish sentiment. Putting it all together, we are now looking for a short position in our U.S. dollar/Japanese yen currency pair.

Fig 6 – Place the entry ever so slightly in the cloud barrier.

Because we are equating the cloud to a support/resistance barrier, we will want to see a close of the session below the cloud before initiating any type of short sell position. As a result, we will be entering at Point B on our chart. Here, we have a confirmed break of the cloud as the price action stalls on a support level at 114.56. The trader, at this point, can opt to place the entry at the support figure of 114.56 or place the order one point below the low of the session. Placing the order one point below would act as confirmation that the momentum is still in place for another move lower. Subsequently, we place the stop just above the high of the candle within the cloud formation. In this example, it would be at Point C or 116.65. The price action should not trade above this price if the momentum remains. Therefore, we have an entry at 114.22 and a corresponding stop at 116.65, leaving our risk out at 243 pips. In keeping with sound money management, the trade will have to have a minimum of a 1:1 risk/reward ratio with a preferable 2:1 risk/reward for legitimate opportunities. In our example, we will maintain a 2:1 risk/reward ratio as the price moves lower to hit a low of 108.96 before pulling back. This equates to roughly 500 pips and a 2:1 risk to reward – a profitable opportunity. One key note to remember: notice how the Ichimoku is applied to longer time frames, in this instance the daily. With the volatility in shorter time frames, the application will tend not to work as well as with many technical indicators.

To Recap:
1. Refer To The Kijun / Tenkan Cross – The potential crossover in both lines will act in similar fashion to the more recognized moving average crossover. This technical occurrence is great for isolating moves in the price action.

2. Confirm Down / Uptrend With Chikou – Confirming that the market sentiment is in line with the crossover will increase the probability of the trade as it acts in similar fashion with a momentum oscillator.

3. Price Action Should Break Through The Cloud – The impending down/uptrend should make a clear break through of the cloud of resistance/support. This decision will increase the probability of the trade working in the trader’s favor.

4. Follow Money Management When Placing Entries – By adhering to strict money management rules, the trader will be able to balance risk/reward ratios and control the position.

In Summary
This indicator is intimidating at first, but once the Ichimoku chart is broken down, every trader from novice to advanced will find the application helpful. Not only does it mesh three indicators into one, but it also offers a more filtered approach to the price action for the currency trader. Additionally, this approach will not only increase the probability of the trade in the FX markets, but will assist in isolating only the true momentum plays. This is opposed to riskier trades where the position has a chance of trading back former profits.

Richard Lee can be contacted at FXCM

Richard Lee is a Currency Strategist at Forex Capital Markets.  Employing both fundamental models and technical analysis applications, Richard contributes regularly to DailyFX, Yahoo Finance and Comtex.  Prior to joining the research team, Richard was one of the senior instructors for the FX Power Course, teaching thousands of traders the basics of currency trading, technical analysis and how to implement trading strategies.  He has extensive experience in trading the spot currency markets, options and futures.  Richard previously traded FX, equity and equity derivatives for four years as well as work for a private equity consortium before joining FXCM.  He holds a BA in Economics as well

Been toying with this.
Whats the point of the Chikou Span?
Its supposedly closing price but shifted back 22 bars.
Thats, 22 bars behind the true price.
Why?
On image, shown as black line, with rough arrows pointing it out. 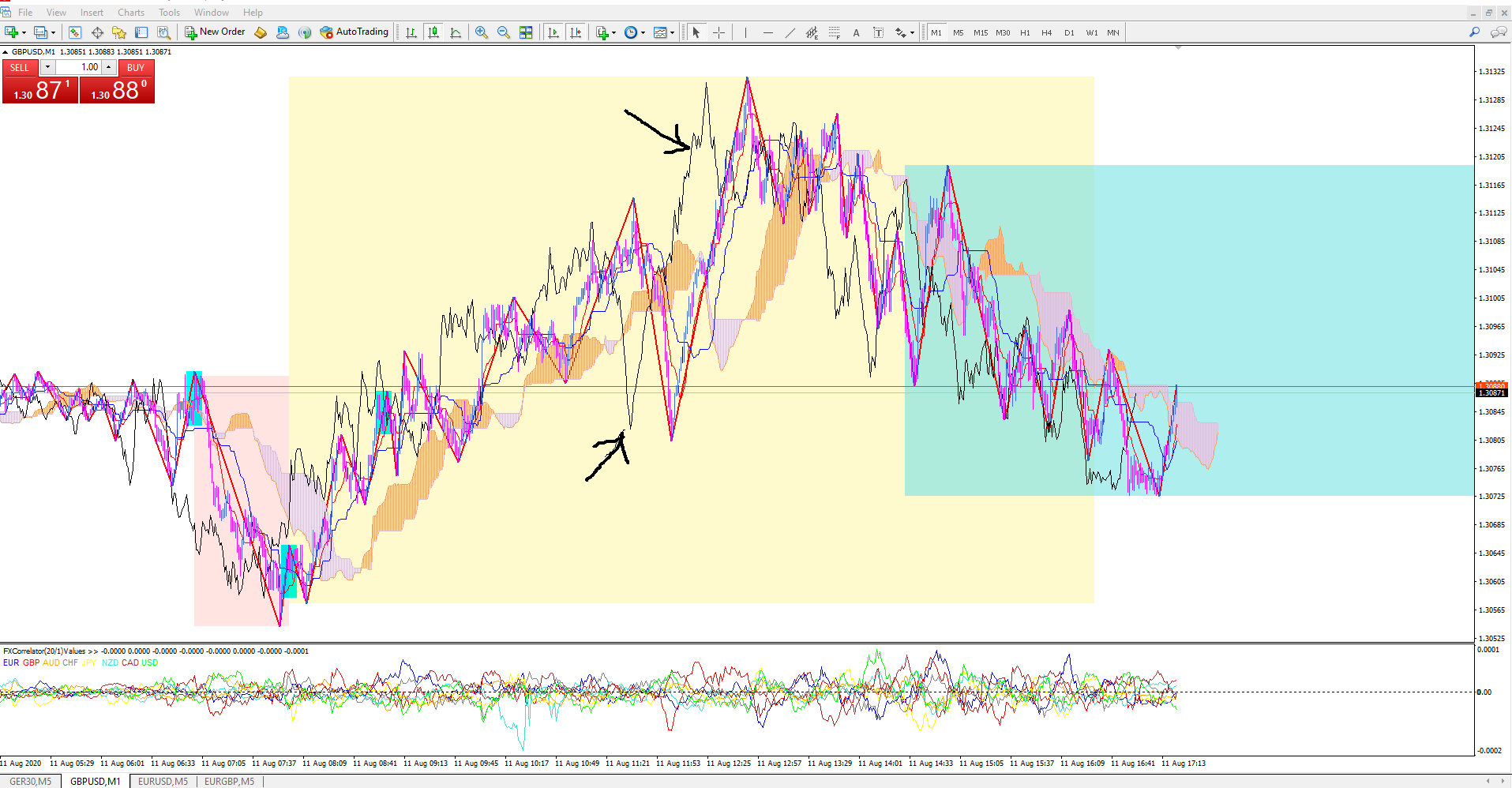 trendie said:
Been toying with this.
Whats the point of the Chikou Span?
Its supposedly closing price but shifted back 22 bars.
Thats, 22 bars behind the true price.
Why?
On image, shown as black line, with rough arrows pointing it out. View attachment 285535
Click to expand...

Hi Trendie, the ichimoku setting for the chikou span is normally 26 rather than 22.

The Chikou span is a component of the Ichimoku Kinko Hyo indicator that is created by plotting closing prices 26 periods in the past.

that aside, why, why have something plotted in the past
what the span is doing is comparing todays price with that 26 days, weeks ago. is it above price, yes = uptrend
in effect it is the exact same calculation of momentum or ROC(rate of change) indicator, but has it on the screen rather than below it.
it is also supposed to be used as a confirmation. if its above the cloud then again, confirmation of its upward bias. personally i dont use it for the second, but i really like momentum as a trend indicator. very simple but with very good results
You must log in or register to reply here.