Point & Figure (P&F) charts are one of the simplest and clearest ways to determining the best time to buy and sell shares. The P&F system represents one of the oldest approaches to share market trading. This method takes the technical analysts approach while monitoring supply and demand for each share and the charts are designed for long-term trading so that the time and cost of trading shares is minimal.

How are Point & Figure Charts Constructed?

In P&F charts both axis are dependent on price rather than one being based on price and the other on date. The key unit in a P&F chart is the point, or unit of price. The point size may change in value along the y-axis to provide consistent and relative price movements. This means that a if a share ranges between $8 and $12, the point size may be 10 cents when the share is below $10 and 20 cents when above. An ‘X’ is placed on the chart to indicate an upward movement and an ‘O’ indicates a downward movement. The graph gets its x-axis dimension via three point reversals. A three-point reversal occurs when either:

When a three-point reversal occurs, the chart is continued in the next column. Thus every column must contain at least 3 ‘O’s or ‘X’s and constitutes movement in one direction only. The attraction of this method is that insignificant movements in the market are filtered out.

Now, let’s look at a typical example (Broken Hill). The point size for these values is 20 cents.

Dates are added to the chart by replacing an ‘X’ or an ‘O’ by the month number. When the year changes it is written at the bottom of the chart. You will notice that the year labels can be vary in position as the charts movement is dependent on price and not on date. The suspension of trading on particular shares is shown by a ‘?’ in the charts.

The Wyckoff method is a special type of point & figure chart. It uses a single box reversal instead of the more common three point reversal. It also varies from the standard point & figure chart because it can contain both X’s and O’s in the same column. This will occur whenever there is only a single entry made in a column. For example if we had a single X in a column followed by 3 O’s, the O’s will be displayed in the same column as the X. In a Wyckoff chart there must always be more than one entry in a column.

Let’s take an example. The box size for these values is $1.00. Note that a Wyckoff chart can also use high and low data, but for clarity we have selected closing price data only.

On 11/02/98 the chart rose from $55 to $57. This resulted in 3 X’s being plotted in the first column. The very next day there was a pull back of one box to $56. Because we are using a one point reversal, we move to the next column and plot the single O. The next day the price rises again to $57. This again is a reversal, however we do not move to the next column because we have only made one entry in the current column. The upward movement continues until the chart reaches $59 on 17/02/98. Continuing to plot the data in this fashion will produce the chart below:

Other than the two requirements described above, the Wyckoff point & figure chart uses the same principals as a standard three point reversal chart.

When to Buy and Sell

When analysing the charts to determine the best time to buy and sell shares, the following criteria must be evaluated:

This pattern occurs when a series of 2 or more tops or bottoms is penetrated. Generally this is formed by 5 vertical columns, however it is possible for formation to be spread over multiple columns as shown below:

Both triangle formations consist of higher bottoms and lower tops, generally with all prices contained between the bullish support and bearish resistance lines.  The signals for the triangle formations are the first Double Top or Double Bottom signals.

The Bullish and Bearish Signal Formation

A Long Tail Down must have at least twenty Os down.  A buy signal is given whenever there is a 3 box upside reversal.  A stop-loss can be placed where a double bottom sell signal may occur. 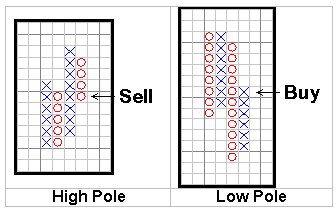 A High Pole begins with at least 3 Xs above a previous top.  The formation is completed when there is a reversing column of Os that is at least 50% as long as the column of Xs.  This warns of a topping process.  The Low Pole is the reverse situation.

A bullish support line is drawn from the lowest point on completion of a significant downtrend and is extended up at a 45-degree angle as far right as possible. This line is predictive because it can be drawn as soon as the market has completed its downtrend. This line does not connect points as trend lines often do. An example of a Bullish Support Line is shown below: 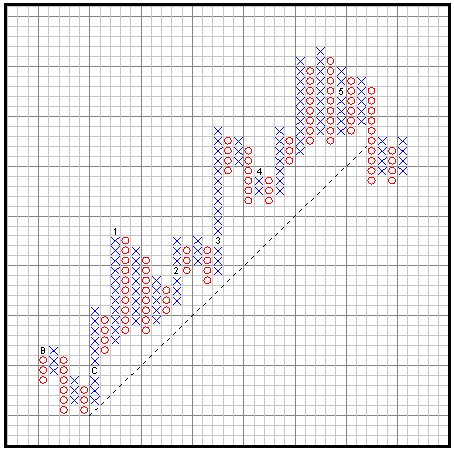 Having drawn this, the theory is quite simple. Any sell signals given above this line should be disregarded. This means the share should not be sold until the first sell signal after the bullish support line has been penetrated. 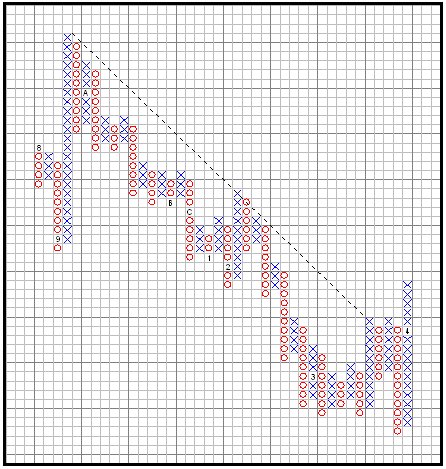 Any buy signals given below this line should be disregarded. This means the share should not be purchased until the first buy signal given after penetration of the bearish resistance line.

Before buying and selling shares, it is necessary to assess 2 market indicators:

Shares should only be purchased when the market as a whole is bullish. Similarly, shares must be selected from industry groups that are bullish and acting better than the rest of the market.

There are two ways to project price: vertical and horizontal counts.

Buy – Assuming a 3-box reversal, count the number of Xs in the first move up that produces a buy signal. Multiply this number by 3 and add the product to the lowest X in the column on the right. Sell – Reverse for a sell signal.

Buy – Assuming a 3-box reversal, count the number of boxes across the base of the formation that has given a buy signal. Multiply that number by 3 and add it to the price associated with the lowest X. Sell – Reverse for a sell signal.

Below are some useful guidelines to consider when buying stocks (reverse for selling stocks):

More information can be found at Point and Figure

Stephen Archer is now retired and was a longer term technical trader who has developed his own point and figure software development tool.

Stephen Archer
Stephen Archer is now retired and was a longer term technical trader who has developed his own point and figure software development tool.
View thread (3 replies)
O

Techniques that avoid the time non-linearity are usually more robust. P&F is one way.
B

It is the first system I learnt and used and I still love it but I would have loved to see a comparison with other methods .

Re: Why Use Point & Figure Charts?


bullfrog said:
It is the first system I learnt and used and I still love it but I would have loved to see a comparison with other methods .
Click to expand...

Hi bullfrog,
When you say 'other methods', I assume you mean other charting methods? This might be problematic with say, candlestick charts or other time based charts, but I would imagine it's doable with other non-time based charting styles such as Renko.
Tim.
You must log in or register to reply here.

Tuesday at 6:02 AM
kazitanzib

How to understand the falling wedge and rising wedge?