Two of my favorite trading subjects are cycles and seasonality. In this feature, I’ll discuss seasonality in agricultural markets.

I want to start out by emphasizing that seasonality or cycles, by themselves, do not make good trading systems. However, they are great "tools" to add to your "Trading Toolbox."

Seasonality in agricultural markets is a function of supply and demand factors that occur at about the same time every year. For agricultural markets, supply stimuli can be caused by harvest, planting, weather patterns and transportation logistics. Demand stimuli can result from feed demand, seasonal consumption and export patterns.

Livestock futures, too, have seasonal tendencies. Hog and cattle seasonals tend to be caused by production, marketing, and in the case of hogs, farrowing.

Grains tend to follow the general rule of lower nearby futures prices at harvest more than other agricultural commodities.

Here is a quick summary of seasonals in several markets. (If you are interested in a more complete study of seasonality, there are entire books written on the subject.)

Corn:
This market’s seasonality can be divided into three time periods: late spring to mid-summer; mid-summer to harvest; and post-harvest. The most pronounced seasonal trend in corn is the decline of prices from mid-summer into the harvest period. Prices are often near their highest level in July because of factors associated with the old crop and uncertainty over new crop production. Even in years when a price decline begins before mid-July, it can continue after mid-July if the crop outlook is favorable. Harvest adds large supplies to the marketing system, which normally pressures prices to their lowest levels of the crop year. Prices usually rise following harvest. However, the "February Break" is a well-known phenomenon whereby corn prices usually show some degree of decline during the month of February.

Soybeans:
The July-August period is usually a bearish time for soybeans. Closing prices during the last week in July are usually lower than those of the previous week in July. Closing prices at the end of August are also usually lower than those at the end of July. Also, soybean prices in late January are usually higher than those in late December. Soybeans many times also succumb to the "February Break" seasonality phenomenon. Soybean meal and oil have the same seasonal tendencies as soybeans.

Wheat:
The seasonality of wheat prices works best when a trader is on the long side from the period of harvest lows to October/November. On the short side, from winter into summer harvest tends to work well. Wheat has two prominent seasonals: One is a strong tendency to decline during late winter and spring as the harvest approaches. The other is to rise from harvest lows into the fall or early winter. Wheat prices begin a seasonally weak period by January or February, in most years.

Live Hogs:
Seasonal marketing pressure increases during March and persists at increased levels during all or part of April. The reason for this is that August and September farrowings are usually larger relative to other farrowing months. Slaughter levels decline seasonally from March-April into July or August. Thus, prices could generally be expected to rise from March to May and decline from May into August.

Cocoa:
The yearly seasonal low tends to occur in January with the Bahia (Brazil) main crop, rather than in May or June with the Temporao (Brazil) crop, because of consumer demand. Consumer demand tends to rise into late fall and early winter, which boosts prices during that timeframe. As demand peaks and then begins to decline, cocoa prices fall into January. It’s important to note that seasonal tendencies in cocoa are not very strong.

Coffee:
The frost season in Brazil occurs during the May through early-August period. In anticipation of this frost, prices tend to rise from January into June. This seasonal tendency is not very strong, however, because coffee can come from other producing countries, such as Mexico. Still, the potential for a Brazilian frost should be monitored. The other seasonal influence is during the winter, when U.S. coffee consumption tends to rise.

Cotton:
Cotton is a market where the "trade" has very heavy participation and seasonals tend to be a function of heavy deliveries issued against the expiring futures contracts — December, March, May, July, and to a lesser degree, October. In November, the market tends to recover from harvest lows, and then in January the market tends to back off to lower levels.

Orange Juice:
Seasonal price movement of FCOJ (Frozen Concentrated Orange Juice) does not usually reflect the December-February freeze period in the southern U.S. Seasonal tendencies are caused by harvest, production (also called "pack") and demand ("movement"). The most significant seasonal move in O.J. is that prices generally fall from November to January. Freezes cannot be completely ignored, however.

Sugar:
Prices tend to peak in November because of a combination of supply and demand. Production at this time is not complete, as the European crop is not yet on the market. Demand in the Northern Hemisphere, however, is usually at its peak in the fall.

In conclusion: I would classify seasonal tendencies as "secondary" technical indicators in my "Trading Toolbox." I do follow seasonals, but they are not my "primary" trading tools. I have seen much hype in the marketplace regarding seasonals. I remember one summer hearing a radio advertisement from a futures brokerage that went something like this: "Colder weather is just around the corner and heating oil demand will increase. Thus, you should buy heating oil futures now, and profit from the increase in demand." If only futures trading were that easy! Every professional trader and commercial firm knows that heating oil demand rises in the winter — and even in the summer months they have already factored that rise in demand into the prices of the farther-out (deferred) futures contracts. The same is true for other markets’ seasonal price patterns. The professional traders and commercials all know about seasonals in the markets, and position themselves accordingly. It is always good that we speculators have as much information on markets as possible. Seasonal price patterns are just one more bit of information to factor into our trading decisions.

Jim Wyckoff is the editor of the "Jim Wyckoff on the Markets" analytical, educational and trading advisory service. He is also a technical analyst for Dow Jones Newswires, and was formerly the head equities analyst at CapitalistEdge.com.Jim has spent over 20 years involved with the stock, financial and commodity futures markets. He was a financial journalist with the FWN newswire service for many years, including stints as a reporter on the rough-and-tumble commodity futures trading floors in Chicago and New York. As a journalist, Jim covered every futures market traded in the U.S., at one time or another. It didn't him long to realize the successful traders in every market-be it pork bellies, Treasury bonds or stock index futures-had a common thread among them: nearly all relied on technical analysis to give them a trading edge.Not long after Jim started his career in financial journalism, he began studying technical analysis and found it fascinating. By studying chart patterns and other technical indicators, he realized the playing field could be leveled between the "professional insiders" in the markets. His work has been focused on achieving that end ever since.Jim considers himself a "straight-shooter" in the challenging endeavor of futures trading. Like achieving success in any profession, being a successful trader requires hard work, experience and continuing education. There are no short-cuts to easy money. And, Jim promises and provides excellent customer service, including picking up the telephone, himself, when his valued customers ring him.  Feel free to give him a call at +1-319-277-8643

Jim Wyckoff
Jim Wyckoff is the editor of the "Jim Wyckoff on the Markets" analytical, educational and trading advisory service. He is also a technical a...
View thread (3 replies)
R

A new article by Jim Wyckoff discussing the seasonal tendencies of the commodities markets has just been posted in the Knowledge Lab.
L

You can access another cool seasonal tool at: http://www.aarontrade.com/Commodity_Futures_Trading_Strategy_Grid.pdf

or you can go the overview page first if you want an explaination of the tool:
http://www.aarontrade.com/html/seasonal_futures_trading_grid.html
C

Example: Commodities in May. Individual stocks, currencies, futures etc. can also be analyzed. 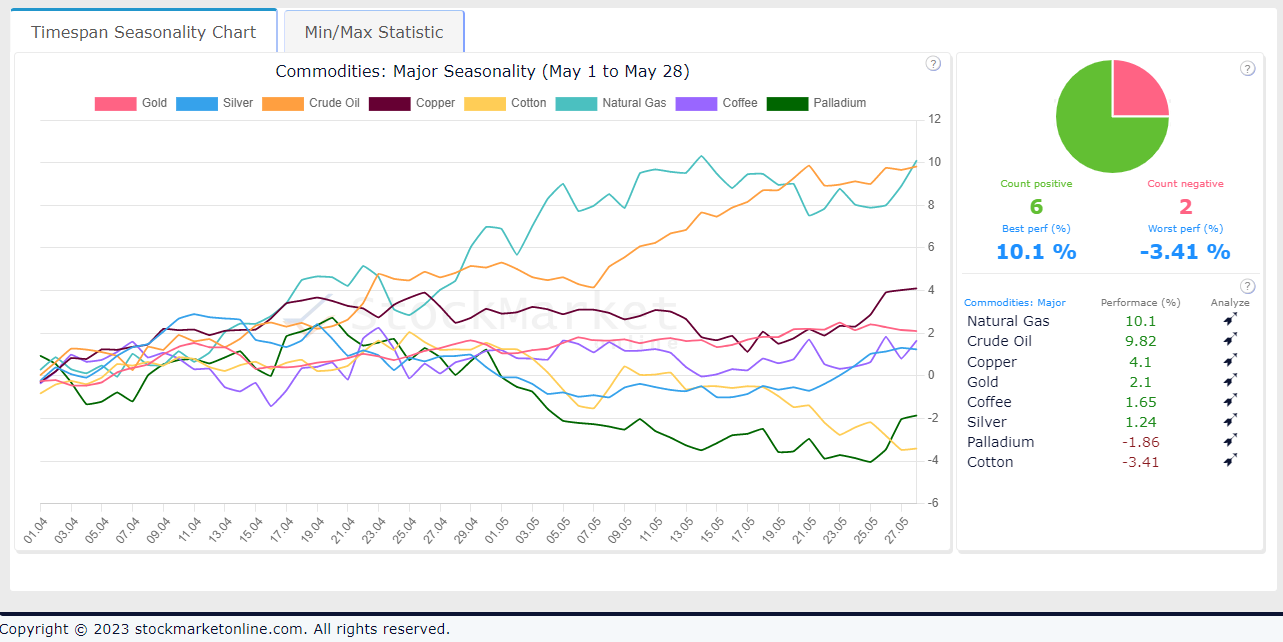 Why 90% of new investors lose money?