Swiss market technicians Etienne Botes and Douglas Siepman introduced the vortex indicator in the January 2010 issue of the magazine, “Technical Analysis of Stocks and Commodities.” Since then, the new technical indicator has gained traction as a reliable trend following indicator that can produce surprisingly accurate buy and sell signals. However, it will take a few more years of market testing and experience to fully evaluate the vortex indicator’s potential.

What is the Vortex Indicator?
The vortex indicator plots two oscillating lines, one to identify positive trend movement and the other to identify negative price movement. Crosses between the lines trigger buy and sell signals that are designed to capture the most dynamic trending action, higher or lower. There’s no neutral setting for the indicator, which will always generate a bullish or bearish bias.

Readings are usually captured over 14 periods (though the technician can choose any length), and then adjusted using technical indicator creator J. Welles Wilder’s true range. Results are posted as continuous lines beneath price bars, while crossovers are compared to other trend-following indicators to produce valid trading signals. Traders can use the vortex indicator as a standalone signal generator, but keep in mind it is vulnerable to significant whipsaws and false signals in congested or mixed markets.

Synergy With Other Indicators
Adjusting the vortex indicator to longer periods will lower the frequency of whipsaws but generate delayed positive or negative crossovers. On the other hand, shortening the length will elicit many crossovers that fail to generate significant trend movement. As a general rule, high beta securities will respond better to shorter-term settings while slow-moving securities respond better to longer-term settings.

Synergistic trading strategies use a simple process that looks for sympathetic buy or sell signals in the vortex indicators as well as in other indicators before committing capital. The challenge comes in two forms: first, there need to be significant differences in data sources to avoid replicating flawed information and second, indicator periods need experimentation and fine tuning to focus on the intended holding period, whether short, intermediate or long term.

This last step of honing indicator periods is vital because trends exhibit time frame independence, allowing multiple uptrends and downtrends to evolve in different time segments on the same security. This fractal behavior will produce false readings if the vortex indicator is looking at one segment of trend activity while a second indicator looks at a second segment. Traders can overcome this flaw through trial and error, by watching how indicator pairs interact on various instruments and in various time frames.  With moving average convergence-divergence in particular, it’s often best to leave settings alone and tweak vortex indicator periods instead.

A Vortex Indicator Trading Strategy
In the 2010 article that introduced the vortex indicator, authors Etienne Botes and Douglas Siepman described a vortex indicator trading strategy designed to filter out and limit false signals. The extreme high or low on the day of the bullish or bearish crossover becomes the intended entry price, long or short. Those levels might not be hit on the day of the signal, prompting a good-until-canceled buy or sell order that remains in place for multiple sessions, if required.

They also recommend combining these entry filters with other risk management techniques, including trailing and profit protection stops. These protective measures lower the incidence of false signals while maximizing profit on the underlying trend, even when it fails to gather significant momentum. However, this approach fails to deal with period length, which will trigger waves of false signals until adjusted to the predetermined holding period and then thoroughly back tested.

Vortex Indicator Example Using Microsoft Corp
Let’s use historical data from Microsoft Corp (MSFT) to test the vortex indicator. As you can see in the graph below, Microsoft Corp shares eased into a narrow range in March 2014. This encouraged traders to watch for a profitable breakout. Following the vortex indicator, there is a buy signal on March 14 but the price closes well below the extreme intraday high at $38.13 a share. The trader sets a good-until-cancelled buy order that will execute when the security returns to that trigger price. 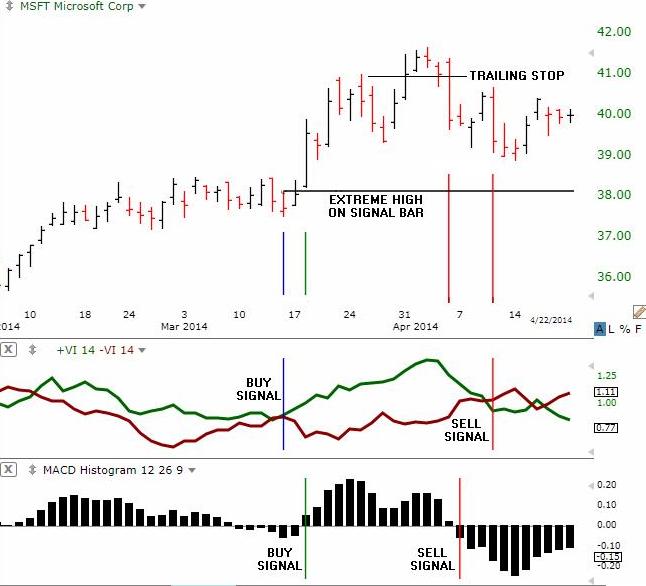 On March 17, the security returns with perfect timing, crossing over the breakout and lifting into the lower $40s. The indicator crosses over to the sell side on April 10, allowing a profitable exit that misses a big chunk of upside.

MACD and a trailing stop assist trade management suggest executing a long position one day later than the vortex indicator buy signal. They also issued a sell signal four days earlier, supporting a more profitable exit. Meanwhile, a trailing stop placed at the March 31 breakout line near $41 a share would have triggered when the security sold off on April 4, capturing an even greater share of the four-point uptrend.

Vortex Indicator and Price Patterns
The vortex indicator also works well when paired with classic price pattern analysis in recognizing legitimate trends while filtering out whipsaws and other range-bound mechanics. Theoretically, this combination should generate the most reliable buy and sell signals at two inflection points:

1)      When a well-developed trading range is set to break out or break down.

2)      When a trending market loses momentum or reaches a significant barrier that favors the transition into a new trading range.

The catalog of well-known range-bound patterns, including flags, rectangles and triangles, benefits this approach because natural breakout and breakdown levels have been fully deconstructed, allowing the trader to focus on the vortex indicator at the same time that price tests support or resistance. Trend strength and durability can be further measured for cycle convergence using stochastics set at 5,3,3 or another relative strength indicator.

Vortex Indicator Example Using American Airlines
American Airlines Group Inc (AAL) carves out a classic double top pattern between December 2014 and May 2015 and then breaks down in a significant downtrend. The vortex indicator issues a sell short signal eight sessions before the technical breakdown, encouraging early short sales within the trading range. The crossover also works well as a secondary indicator for pattern traders looking to stack the odds in their favor. A vortex indicator cover short signal arrives six weeks later, setting up a profitable exit near $40 a share. 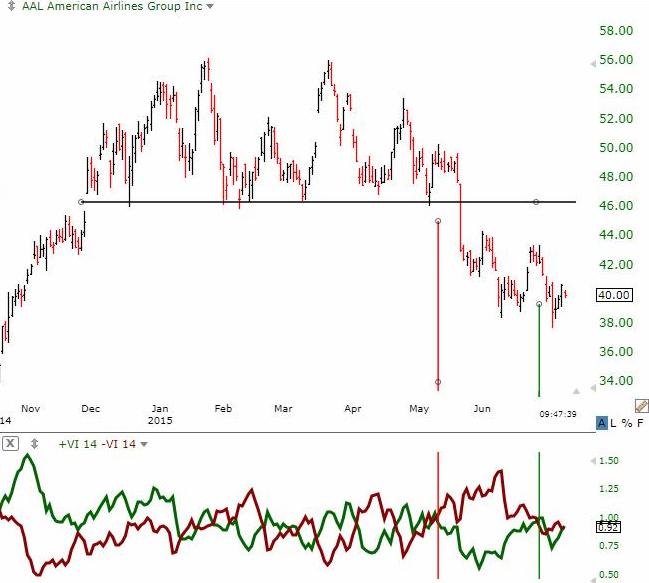 How to understand the falling wedge and rising wedge?

📊 Understanding the Cup and Handle Pattern