Trading requires reference points (support and resistance), which are used to determine when to enter the market, place stops and take profits. However, many beginning traders divert too much attention to technical indicators such as moving average convergence divergence (MACD) and relative strength index (RSI) (to name a few) and fail to identify a point that defines risk. Unknown risk can lead to margin calls, but calculated risk significantly improves the odds of success over the long haul.

One tool that actually provides potential support and resistance and helps minimize risk is the pivot point and its derivatives. In this article, we’ll argue why a combination of pivot points and traditional technical tools is far more powerful than technical tools alone and show how this combination can be used effectively in the FX market.

Pivot Points 101
Originally employed by floor traders on equity and futures exchanges, pivot point have proved exceptionally useful in the FX market. In fact, the projected support and resistance generated by pivot points tends to work better in FX (especially with the most liquid pairs) because the large size of the market guards against market manipulation. In essence, the FX market adheres to technical principles such as support and resistance better than less liquid markets.

Calculating Pivots
Pivot points can be calculated for any time frame. That is, the previous day’s prices are used to calculate the pivot point for the current trading day.

The pivot point can then be used to calculate estimated support and resistance for the current trading day.

To get a full understanding of how well pivot points can work, compile statistics for the EUR/USD on how distant each high and low has been from each calculated resistance (R1, R2, R3) and support level (S1, S2, S3).

To do the calculation yourself:

Judging Probabilities
The statistics indicate that the calculated pivot points of S1 and R1 are a decent gauge for the actual high and low of the trading day.

The result: For the initial 2,026 trading days since the inception of the euro.

This information is useful to a trader; if you know that the pair slips below S1 44% of the time, you can place a stop below S1 with confidence, understanding that probability is on your side. Additionally, you may want to take profits just below R1 because you know that the high for the day exceeds R1 only 42% of the time. Again, the probabilities are with you.

It is important to understand, however, that these are probabilities and not certainties. On average, the high is 1 pip below R1 and exceeds R1 42% of the time. This neither means that the high will exceed R1 four days out of the next 10, nor that the high is always going to be 1 pip below R1. The power in this information lies in the fact that you can confidently gauge potential support and resistance ahead of time, have reference points to place stops and limits and, most importantly, limit risk while putting yourself in a position to profit.

Using the Information
The pivot point and its derivatives are potential support and resistance. The examples on the next page show a setup using pivot point in conjunction with the popular RSI oscillator. 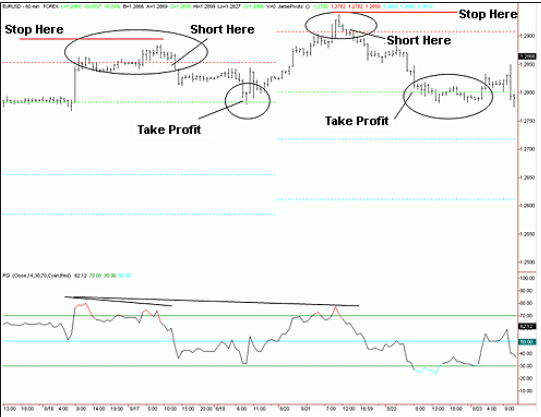 This is typically a high reward-to-risk trade. The risk is well-defined due to the recent high (or low for a buy).The pivot points in the above examples are calculated using weekly data. The above example shows that from August 16 to 17, R1 held as solid resistance (first circle) at 1.2854 and the RSI divergence suggested that the upside was limited. This suggests that there is an opportunity to go short on a break below R1 with a stop at the recent high and a limit at the pivot point, which is now a support:

The next week produced nearly the exact same setup. The week began with a rally to and just above R1 at 1.2908, which was also accompanied by bearish divergence. The short signal is generated on the decline back below R1 at which point we can sell short with a stop at the recent high and a limit at the pivot point (which is now support):

The rules for the setup are simple:

1. Identify bearish divergence at the pivot point, either R1, R2 or R3 (most common at R1).
2. When price declines back below the reference point (it could be the pivot point, R1, R2, R3), initiate a short position with a stop at the recent swing high.
3. Place a limit (take profit) order at the next level. If you sold at R2, your first target would be R1. In this case, former resistance becomes support and vice versa.

1. Identify bullish divergence at the pivot point, either S1, S2 or S3 (most common at S1).
2. When price rallies back above the reference point (it could be the pivot point, S1, S2, S3), initiate a long position with a stop at the recent swing low.
3. Place a limit (take profit) order at the next level (if you bought at S2, your first target would be S1 … former support becomes resistance and vice versa).

Jamie Saettele can be contacted at DailyFX

Jamie Saettele is the senior currency strategist at Forex Capital Markets LLC in New York and author of Sentiment in the Forex Market.

He is an active trader and author of Sentiment in the Forex Market. His technical strategy focuses on sentiment indicators, Elliott Wave, and seasonality.

Jamie Saettele
Jamie Saettele is the senior currency strategist at Forex Capital Markets LLC in New York and author of Sentiment in the Forex Market.He is an active ...
View thread
You must log in or register to reply here.

Is investing in the forex market risky?