When asked how he likes to trade, Dan Zanger responds using a race car analogy.

“I like to go 180 mph just inches from the wall. That means being margined 2 to 1 and either long or short a stock that is highly volatile and getting ready to make a big move,” he says.

Zanger puts his money where his mouth is. He holds the unofficial record in trading stocks by turning $11,000 into more than $18 million in 18 months in 1999-2000. He grew that to an incredible $42 million in less than two years and has the tax receipts to prove it. 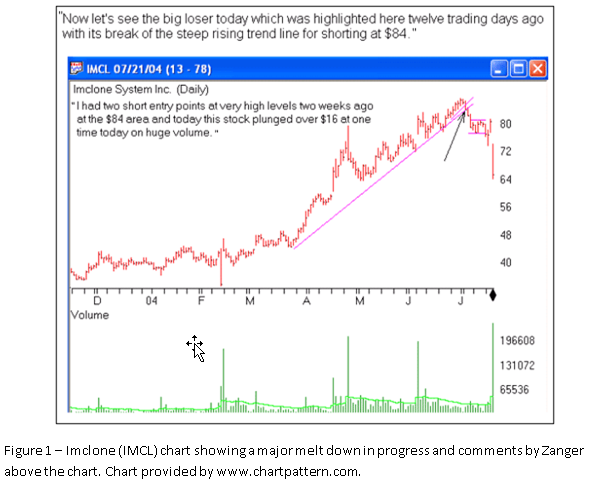 First introduced to stock markets in 1976, Zanger dabbled for a few years while working his full-time pool contracting business. His two biggest mentors during his formative years as a trader were Gene Morgan and William O’Neil. He learned everything he could about chart patterns and important fundamentals, but the style he developed is very much his own. He got really serious in 1989 and spent the next 10 years honing his craft.

How Does He Do It?
“I use absolutely no indicators whatsoever,” he said in an interview with me last year. “I simply rely on chart patterns, price and volume. Who has the time to look at so many indicators when you’re scrolling through 400 stocks a night?” 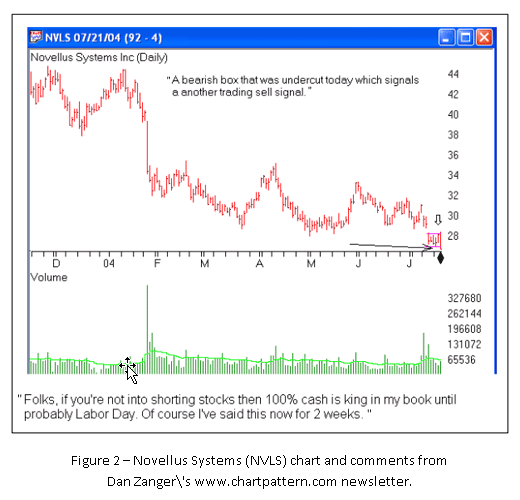 The type of set ups Zanger looks for is exemplified in figure 1. After a strong trend up from March through June, Imclone started to break down. After breaking the trend line, it put in one of his favorite chart patterns, the bear flag. If the lower trend line of the flag is broken it means a potential short. If it is broken on high volume, as it was on July 21, Zanger jumps in with both feet, rides the move until the excitement dies down a little, and then exits.

Novellus Systems exhibits an example of another good short trade. Zanger identified the bear box in figure 2 when the stock was trading at $27 to $28. Four days later it was trading in the $25 range.

“I don’t really use stop losses in the classical sense,” says Zanger. “When it takes an increasing amount of volume to drive a stock and the pattern starts to lose steam, it’s time to start feathering out. I want to get in near the beginning of the move and out when it begins to peter out. Why wait until it runs out of gas and goes against you? That approach can be quite costly,” he says. 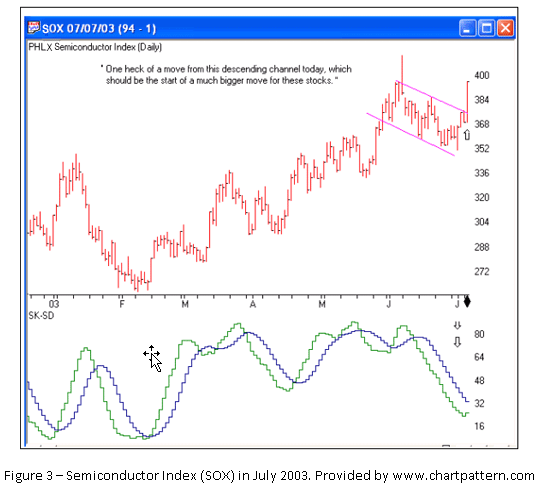 Volume plays a very important part in Zanger’s trading approach, but interestingly enough he doesn’t use volume indicators like Mark Chaikin’s Money Flow Index. “I have not found a way to make it work effectively. I have seen it fail so many times and in no way will this indicator highlight or pinpoint the big movers in the market,” he explains.

Markets have changed dramatically since the first article highlighting Zanger’s incredible achievement – entitled “My Stocks Are Up 10,000%!” – appeared in Fortune Magazine in December 2000.

“For much of the 90s, we were in a huge bull market. That is when I learned to trade. My mistakes during that time can be traced in a large part to a belief that stocks could go no way but up. No matter how good the earnings were, they would only continue to get better. But then the stock would drop 30% and on 2 to 1 margin, I’d lose most of my money. When you begin to believe that a stock can only go in one direction, that is when you will have your head handed to you.”

Throughout the 1990s, Zanger made and lost it “three or four times.” He was able to recognize market bottoms, cycles, important time frames and could see when stocks were taking off, but he had a harder time seeing when they were getting ready to tank.

That changed during the Asian financial crises that caused the market meltdown in 1997.

“Oil and oil drilling stocks were leading the market at the time. Oil at times moves up toward the end of a bull market and leads a recession,” he comments. It helped him recognize the market top, which before he had a hard time seeing. He says it was a defining moment in his career.

Unfortunately he got caught in a stock that was collapsing so fast he couldn’t get out. It almost wiped him out, but he bounced back. More importantly, his education had come full circle.

But Zanger was still not immune to large losses. He remembers one day in October 2000 very vividly. After the big bubble run up, he “had so much cash that it was mind-boggling.” But, he was in “just about every hot fiber stock at the time … with that mind-boggling money leveraged at 2-to-1 margin,” when sector leader Nortel Networks (NT) warned of a revenue shortfall after the close of trading. He considers himself lucky to have walked away after losing more than 30% of his portfolio the next day.

It is lessons like this that have helped shape the trading strategies Zanger uses today. He combines technicals with fundamentals he learned from stock guru William J. O’Neil, discussed in his book “How To Make Money In Stocks” in a method he calls CANSLIM.

Zanger has read the book countless times and continues to reference it regularly today. He is a CANSLIM convert looking for stocks that have a global reach, that are leaders in their industry and that have earnings that demonstrate continuous improvement. He says that combining technicals AND fundamentals greatly increases his chances for success. He likes stocks that are under-known and under-owned.

It is also important to find timely market leaders by sector, industry and company. In the early 1990s during the first Gulf War it was biotechs that were huge market leaders. Later in the decade it was Internet stocks such as Amazon.com. In 2000, it was the fiber optics stocks. Find the sector that is in favor and then find the company that leads it. When the leader begins to trend down it’s time to move on. Zanger is interested only in stocks that are “frisky.”

“You have to know what’s hot and follow that group or stock … and stay with the winners. Why own a stock that is making a $2 gain per day when you can play one that makes a $5 move?”

How Does He Find Stock Candidates?
Of the 1,400 stocks he scans nightly, Zanger may choose 50 to 60 to watch on his quote screen during the following day. He focuses on those that show building volume and potentially profitable patterns. When a pattern breaks out or breaks down on volume he makes his move.

He Still Prefers Bull Markets
“You can make 300 to 400% on your money in a bull market, but the most a stock can move down is 100% and that’s if it goes to zero. That doesn’t happen very often. You play the bear market just to hang around so that when the big move finally does come, you’re there,” he says.

It is why he is a big believer in cash during a bear market. He wants to be ready for the next rally.

Zanger also did well in the 2003 rally. His newsletter, The Zanger Report at chartpattern.com, identified a descending channel breakout in the Semiconductor Index (SOX) in July 03, when it hit 368 (figure 3). By December, it was trading at 560.

So how has Zanger done since the first article about him in Fortune Magazine?

One thing he didn’t mention during our interviews is that, while he prefers bull markets, his system also works extremely well during trading range markets when most investors and traders are sidelined. As long as even a few volatile stocks he refers to as his “frisky buddies” are breaking up or down, he can make money.

When does he go on vacation?

“Not very often. I have a large motor yacht and a home on both coasts but stocks are my life. If markets are open I have to be there. There is nothing more exciting and enjoyable. I’m so blessed to be doing what I want to do and get paid to do it. When I’m on vacation I can’t wait to get back to the market where all the action is,” he exclaimed.

“I just can’t wait for very high-speed satellite and a reasonable rate to come around so I can trade from my yacht from anywhere in the world.”

With that kind of passion and commitment, it’s not hard to see why Dan Zanger has been so successful.

Matt Blackman can be contacted at TradingEducation.com

Matt Blackman is a market analyst for http://www.tradingeducation.com, a free educational website. He is a technical trader, author, reviewer and keynote speaker whose work has appeared in a number of major financial publications, websites and newsletters and is a member of the Market Technicians Association (MTA) and Technical Securities Analysts Association (TSAA). He can be reached at [email protected]

Great article Thanks for the Read!!!
You must log in or register to reply here.