Most traders who have even a passing acquaintance with technical analysis have heard about a classic chart pattern called the double bottom.  It looks like a “W” on the chart.  The standard trading methodology suggests buying when the stock breaks out past the middle peak of the W” and setting an initial target by adding the distance between the bottoms and the middle peak to the breakout price. (See figure 1).  By buying the breakout a trader is hoping for a higher probability that the stock will reverse as opposed to going sideways.  However, the temptation is always there to try and enter the trade earlier and capture some of the move up from the second bottom to the middle peak, which can sometimes be substantial, especially when the double bottom is quite tall. 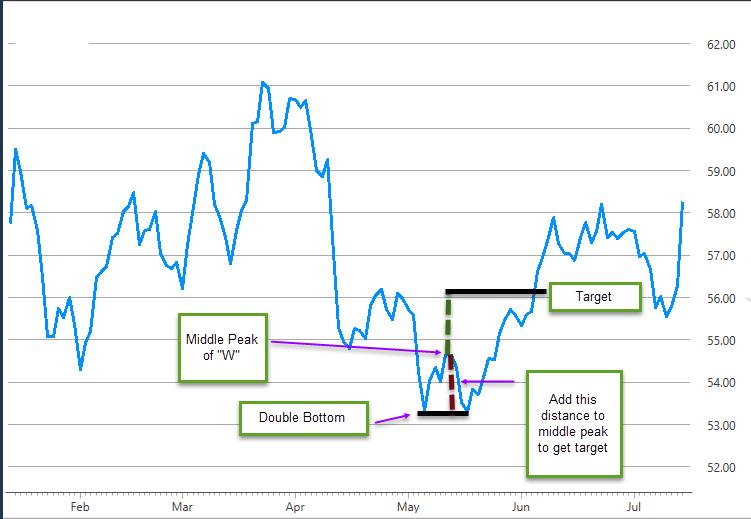 If an earlier entry appeals to you, here are some possible clues you can look for:

How the bottoms form in relationship to the Bollinger Bands®

In my experience, buying into the second bottom is considered a better practice when it forms like this:

How the RSI behaves when the bottoms form

The RSI is a type of indicator called a momentum oscillator and is commonly used to detect overbought and oversold conditions.  Welles Wilder, who developed the indicator in 1978, felt the most effective use of the RSI was looking for divergences to help identify potential changes in trend.  For a double bottom we would like to see the second bottom form at the same or slightly lower price level than the first, with the RSI having a higher value at the second bottom than at the first.  What all this is telling us it that the second low is being made with less momentum than the first.

Where the bottoms form in relation to moving averages

Double bottoms tend to be more reliable if the volume as the second bottom forms is less than was seen on the first bottom.  Also, it is better if volume is generally declining as the pattern progresses.

Buying a stock near the second bottom is a bullish trade and bullish trades obviously work out more often if the overall market is bullish too.  One simple method I use to assess the health of the market is to look at the slope of the 100 day simple moving average of an index that contains stocks similar to the one I want to trade.  For example if I am attempting to pick a bottom in a large cap technology stock, I’ll look to see if the 100 day moving average of the NASDAQ 100 is sloped up.

Figure 2 shows a typical set up. 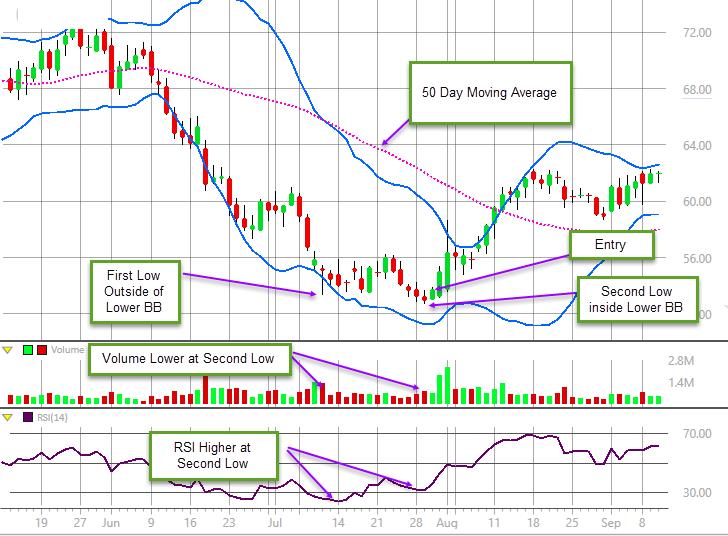 Once the second bottom is identified with the characteristics listed above, I typically wait for some type of confirmation.  This could be a close near the high of the day with an increase in volume, or even better, seeing the stock trade above the high of the previous day.   For the target, I will sell at the rally high (middle peak of the “W”) which often acts as a resistance level.  If the stock moves against me I will consider exiting if it trades below the lower of the two lows.

If the stock reaches my initial target of the rally high, I will sell and take a profit.  However, I am not necessarily done with the trade.  Remember that if the stock can clear the middle peak of the “W” the odds increase that that the stock is really reversing its previous trend.  If that occurs, I will buy back into the stock with an initial profit objective based on the classic method of adding the distance between the bottoms and the middle peak to the breakout price.  Naturally there are no guarantees that the stock will achieve this target price.  If the stock doesn’t reach this objective and trades back below the middle peak I will exit the trade, hopefully for only a small loss.

This two stage approach has several advantages.  If the stock only makes it to the middle peak and then reverses, I should have a profit.  If it does break out but then fails, I have a loss on the position I re-entered but the gain on my first trade generally still gives me an overall profit.  Finally if the breakout succeeds and travels to the target, I will have captured almost the entire move from the very bottom of the formation.

Lee Bohl can be contacted at Charles Schwab UK Ltd

Lee Bohl is Trading Services Manager, Charles Schwab & Co., Inc. and has been an active trader consultant with over thirty years of investment experience, ranging from futures and stock trading to investment product design, wholesaling, money manager evaluation and selection, and marketing and general management.

Lee’s areas of expertise include technical analysis, trading strategies and trading software. He holds the Chartered Market Technician designation awarded by the Accreditation Committee of the Market Technicians Association. At Schwab, Lee uses Schwab's Live Online workshops to educate a large and diverse group of traders around the world.

Lee Bohl
Lee Bohl is Trading Services Manager, Charles Schwab & Co., Inc. and has been an active trader consultant with over thirty years of investmen...
View thread
You must log in or register to reply here.

BITCOIN The complete Cycle mapping. Will you miss out on this?

B
Strategy: Buy the Dip with Montley Fool Recommendations