The Coppock Curve (CC) was introduced by economist Edwin Coppock in Barron’s, October 1962. While useful, the indicator isn’t a commonly discussed amongst traders and investors. Traditionally used to spot long-term trend changes in major stock indexes, traders can use the indicator on any time and in any market to isolate potential trend shifts and generate trade signals.

Coppock Curve
Coppock initially developed the indicator for long-term monthly charts; this will appeal to long-term investors as signals are quite infrequent on this time frame. Drop down to a weekly, daily or hourly time and the signals become progressively more abundant.

Coppock came up with 11 and 14 periods for the ROC part of the calculation after being told by Episcopal bishops that the average person’s mourning period is 11 to 14 months. Coppock inferred a downtrend was like a mourning period, so he used these figures.

For those mathematically inclined the formula is:

Where the ROC is:

And where “n” is the number of periods used in the calculation–in this case, 11 and 14 (two separate ROC calculations). 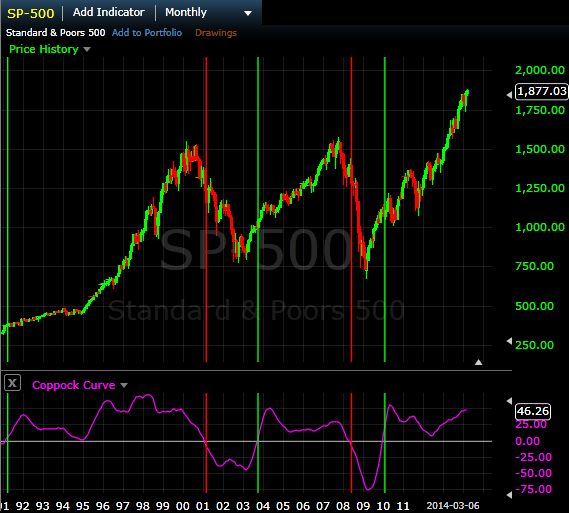 In Figure 2 the strategy is applied to a daily chart of the S&P 500. Many more signals are generated, appealing to more active traders who wish to enter and exit on each price wave. 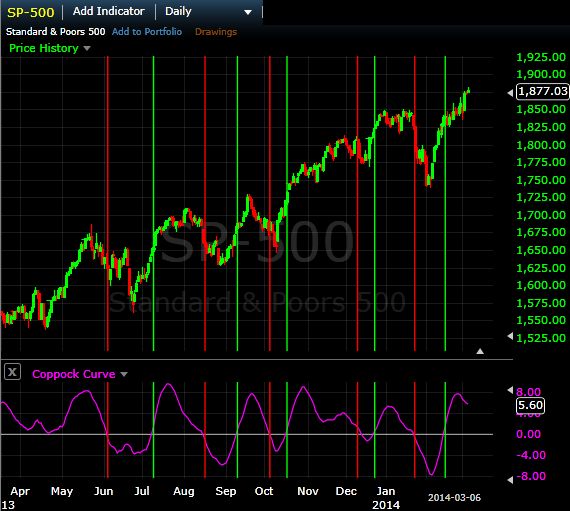 Adjusting Settings
While the typical indicator settings work well on monthly charts, they may not work as well on weekly or shorter time frames. In Figure 2 for example, entries and exits occur a bit too late in the move to extract much of a profit from the price waves and would result in losses on a number of trades.

By decreasing the WMA to 6 (instead of 10), entries occur a bit earlier in the up moves, and exits (and potential short trades) occur a bit earlier in the down moves. In Figure 3, the vertical lines on the price portion of the chart reflect entires and exits based on typical settings (14,11,10), while the vertical lines on the Coppock Curve portion of the chart reflect entries and exits based on adjusted settings (14,11,6). The adjusted settings shift the entries and exits slightly to the left; such adjustments can have a large impact on profitability or losses.

The adjusted settings also created a new buy and sell signal in April 2014, which is not marked on the chart. 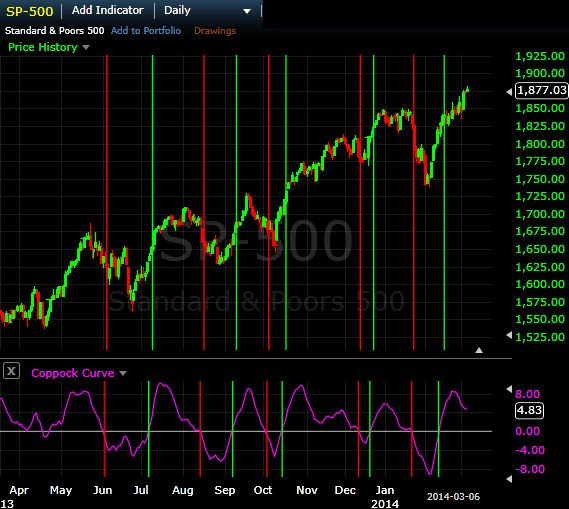 Filtering Trades
Active traders may wish to only take trade signals in the same direction as the dominant trend, as this is where most of the profits lie. On a longer-term chart, note the trending direction. If trading on a daily time frame, the longer-term chart would be a weekly. If the Coppock Curve is above zero on the weekly, only take long trades on the daily chart. Sell when a sell signal occurs, but don’t take short trades because this would be against the dominant trend.

If the dominant trend is down, take only short trades on the shorter time frame. Exit short positions when a buy signals occurs, but don’t establish a long position as this would be against the dominant downtrend.

Adjust the settings of the indicator on both time frames to create the number of trade signals you are comfortable with.

Considerations
When price is moving in a choppy fashion, especially on smaller time frames, multiple signals can be generated resulting in numerous very short-term, and potentially unprofitable, trades. The indicator is best applied to trending markets, which is why establishing a dominant trend on a longer time frame can help filter some potentially poor trades on lower time frames.

In Summary
The Coppock Curve is a momentum oscillator originally designed to point out shifts in the long-term trend of stock indexes. It does a good job of pointing out these trend changes on the monthly chart. Shorter-term traders can also use the indicator, and some adjustment to the settings may be required on these shorter time frames. Traders are encouraged to test out the strategy on their own markets and time frames, and make appropriate setting adjustments, before implementing the strategy in the live market.

Cory Mitchell
Cory Mitchell began trading in 2005.  He has a degree in business, the Chartered Market Technician (CMT) designation, is a member of the Market T...
View thread (1 reply)
T

I like the way of thinking behind the indicator and the strategy. Obviously this is a masterpiece of trading approach which inspires traders to dig deeper and furthermore, explore the 'logics' of market movement. I read it twice, probably will read again and of course will implement on my trading. My questions: could it be applied to currency market, and where could I get the Coppock indicator? Appreciate for the good article.
You must log in or register to reply here.

Why the aversion to trading stocks?

What is position trading in Forex?