115 99
The Ray Dalio All Weather Portfolio is exposed for 30% on the Stock Market and for 15% on Commodities.

What’s in the All Weather Portfolio?
The asset allocation of the portfolio is broken up like this:


It's a Medium Risk portfolio and it can be replicated with 5 ETFs.

Do you use this Portfolio model?

You can read more here :

Build the Ray Dalio All Weather Portfolio with 5 ETFs. Follow its asset allocation and find out the historical returns of the portfolio.

Applying leverage to the Ray Dalio All Weather Portfolio gets you enhanced exposure to what is traditionally a low-risk, low-volatility asset mix.

CavaliereVerde said:
A simplified version can be: 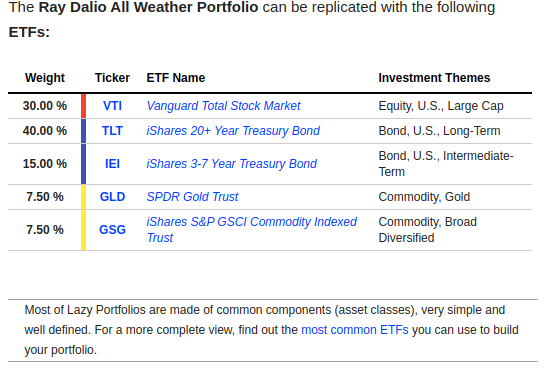 Vanguard Total Stock Market (VTI): which are the historical returns and the worst drawdowns? Is it a good choice for your portfolio?

iShares 20+ Year Treasury Bond (TLT): which are the historical returns and the worst drawdowns? Is it a good choice for your portfolio?

iShares 3-7 Year Treasury Bond (IEI): which are the historical returns and the worst drawdowns? Is it a good choice for your portfolio?

SPDR Gold Trust (GLD): which are the historical returns and the worst drawdowns? Is it a good choice for your portfolio?

iShares S&P GSCI Commodity Indexed Trust (GSG): which are the historical returns and the worst drawdowns? Is it a good choice for your portfolio?

318 111
Anything that relies on holding stocks through a 50% drawdown is flawed, regardless of its choice of asset allocation
why not take this concept further and introduce a very simple market timing aspect and completely smash it?

Gargamel said:
While the majority of people leave their money at banks to get maybe 1% and they get taxed on that.Than some of them come to a social-trading site and say 10% is rubbish,because they see a bunch of traders making 40-100% .
Click to expand...

@Gargamel
Writing this I am not advertising darwinex, etoro trading or social trading in general but this is my honest answer.
An ETF portfolio works much better than any kind of social trading.

How many years of experience we need to acheive this kind of result with social trading?
Last edited: Nov 22, 2020

244 469
Well after some 5 years of darwinex,there are already some traders rising from the ranks with 10-15% annualized and around 12% max .DD.In next 5 years that base should double or triple at least.If portfolio is composed out of such traders after 10 years of operation,it would have very low downward volatility and investor could leverage it *2 .
Regarding those backtests,I was around in 2008 when system had a heart attack and all could have ended very unfavourably for such backtested ETF portfolio.Namely there should have been deflationary collapse,but politicians broke all rules,cancelled capitalism and bailed out their cronies at the expense of everybody else,thus putting western world on respiratory machines... As far as I am concerned federal USA government is totally bankrupt.Or,as Bernie Madoff puts it:Federal government is Ponzi scheme. 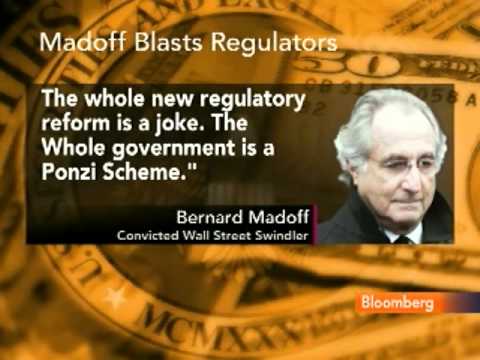 1,596 2,069
Exact maybe US will bankrupt or bitcoin will be the new gold, there will be always some exceptions in every kind of investment.
The backtest above includes 2008, return of 2008 is 7%
Dalio invests the majority of his money in this way and his backtest are 100 years long, including 1929.
I discorvered this recipe one year ago and guess what, +14% YTD.
More than my darwins (that are positive in 2020 ), more tham my darwin portfolio, more than many professionals.

244 469
1929 and 2008 were the same shit.Both marked the point of total financial and moral bankruptcy.Dalio would have been pauper in 2009 if politicians didn't bend the rules in favour of rich people so they remained rich.Roosevelt did the same 80 years before that.He confiscated all gold(real money at that time) to save the system.
If you believe that USA/dollar system will remain functional until the end of times,than this portfolio makes sense.
If there is systemic collapse or civil war.... new gold is loaf of bread and loaded gun.I hope leaders in EU are smart enough to keep stability and order here.Few days back I saw report from SWIFT that € has surpassed $ in international settlements.Yankees claim that they have elected a man with Alzheimer to replace narcissistic clown.But country is totally divided and disoriented.Biggest debtor country- nobody can bail them out even if anybody wanted.These changes in reserve currencies and international settlements go slowly,but when they get momentum they are unstoppable.For example:100 years ago British Pound was what is US dollar today.Forget about backtests.
I saw an article recently about Dalio saying USD is about to lose a lot of value.Apparently he is already looking to jump the ship.
Reactions: CavaliereVerde

1,596 2,069
You are 100% right.
Countries are bankrupt, central banks are cheating and also many big private banks are bankrupt.
Money has no value but they make the rules, they decide what is real.
If US falls everything falls, it would be dark ages and anarchy and don't think a darwin portfolio would work in that context...
It hasn't to work til the end of time, we don't live forever and nothing lasts forever.

244 469
EU and € are not bankrupt.EU is hardest currency at the moment.They cannot print it willy-nilly,there are big obstacles to that.EU has functional economy and trade surplus with outside world,no bloated military seeking fights all around the world ,very big internal market,modern infrastructure and above all:disciplined,orderly population.When was there looting and arson in Europe for whatever reason?There are only small islands of anarchy in Western Europe bigger cities but nothing on the scale to destabilize whole society.
Forex will stay and DAX will stay.That is enough for my needs.I would be actually happy if those crooks from Wall Street lose control over forex and we return to pre-2010 happy days with mostly natural movements and occasional central-bank intervention,not like this algo -controlled chaos .Wider spreads,but natural market movements!
You must log in or register to reply here.