The Equities markets are still trying to live with the current higher UST yields which weigh down on the investing spending.

UST 10yr yield ended last year close to 0.95%, before the run to the current level above 1.60% which has been sparked by the Democratic winning of US Senate runoff for Georgia 2 seats.


The winning raised the odds for having stronger reflation plans to come, amid Democratic control of the house and senate and shortly it has been materialized by Biden $1.9tr relief which was like a reward to the voters the republican refused to share in representing, after their failure.

The plan which is to boost the US family by Lower cutoff limits for $1,400 payments it contains could add to the Dems political situation.

Specially, as it is to be without higher corporate taxes to finance till the crisis end as US Treasury secretary promised before the senate, before affirming her mandate to the position.

Yellen referred to the need to act big as the Fed does and the benefits of doing that meanwhile surpass the worry about the current widening fiscal deficit.

But the money markets did not believe that and sent the cost of borrowing higher from a side because if it is to succeed it will speed up the recovery and from other side if it is to succeed or not, the funding of that growing debt carries higher risks and hurts the creditability of US.


The current debt level surpassed last week USD28tr reaching now USD28.05tr and US Debt to GDP ratio reached new all times high at the end of 2020 third quarter recording 127.7% and hurting the creditability of US which is still struggling to have faster growth rates, after easing down to 4.1% annualized GDP growth rate in the fourth quarter of last year.

The OECD expected last week US GDP growth rate to reach 6.5% from 3.2% it was expected 3 months earlier because of Biden’s $1.9tr plan which can contribute in raising the global economic growth rate by 1% this year.

The US economy has already got boosts by several reflation plans valued more than USD1.5tr, before the virus crisis during Trump's era which watched also threats to the global economy because of his trade wars which drove the Fed to lower the Fed fund rate three times by 0.25% in the period from Jul. 31 to Oct. 31, 2019.


But now, it’s most likely to see the Fed letting the higher yield facing the higher inflation pressure next, getting out from the equation without taking a side.

The Fed has been actually criticized by fueling assets bubble and contributing in using of higher rates of leverage in the equities market during The Fed’s Chief Gerome Powell testifying before the senate banking committee last month.

Powell did not deny this time, referring to that the Fed is only one element among others.

The Fed may be willing ahead to carb that bubble by letting the yield curve rising, while we are ahead of facing higher yearly inflation wave this spring, due to last spring economic paralysis which drove the energy and commodities prices down significantly.

But now the situation is completely different thanks to the central banks easing efforts and the governments relation plans and the current existence of vaccine against Covid-19.


The FOMC members did not show to the markets serious concerns about the yield rising in the secondary money market or readiness to react to that rising before their next meeting.

While the ECB governing council members looked worried about the yield rising in the European money market which started to follow its US counterpart and the statement which has been released following their meeting last Thursday has highlighted that concern by referring to increasing of PEPP pace of buying next quarter to tackle that rising.

The ECB has been actually concerned about EURUSD appreciation to 1.2350 in the beginning days of this year which has been to them unreasonable.

The comments which came out from ECB until now was aggregately referring to the need of watching closing the money market changes.

It’s hard to detect comments from ECB governing council members talking about higher growth outlook driving these yields up or even inflation outlook as you can find easily in US from the Fed which preferred to not temper the market by mentioning certain tools to face the next higher transitory inflation pressure to come by God’s will.

While the ECB seemed taking the governmental bonds yield rising seriously relatively to other major central banks facing the same situation and on the clear discrepancy between the Fed and ECB, EURUSD came under pressure and was the most favored for selling recently.


The situation in China is not completely different or separated from US, as PPI is rising and can export inflation pressure all over the world not only US which is still its major trade partner.

China PPI rose by 1.7% yearly in February from only 0.3% in January and this inflation pressure over the producing level is expected ahead to be transferred to the consuming level and that can cap PBoC from prompting more stimulus plans.

PBoC Deputy Governor Chen said recently that “China’s money supply growth would not exceed GDP growth and PBoC does not see any need for major stimulus over the next five years”.


We need to see and evaluate ahead the markets readiness to live with these current yields rate which are still exposed to the upside, as the last US session move by the end of last week has shown.

The ability of Gold to rebound can be an indication of the equities markets’ ability to do too. The gold does not give yield and it came under increasing downside pressure sent it to $1676 per ounce, amid markets focusing on the UST yield curve to take their keys from its directions.

The gold ability to rebound to $1730 currently deserves to take your attention, while UST 10yr yield is at its highest level since US economic shutdown near 1.635%.

We need to see whether or not it can be able to hold what it gained in the recent hours amid yields rising without divergence to the downside. 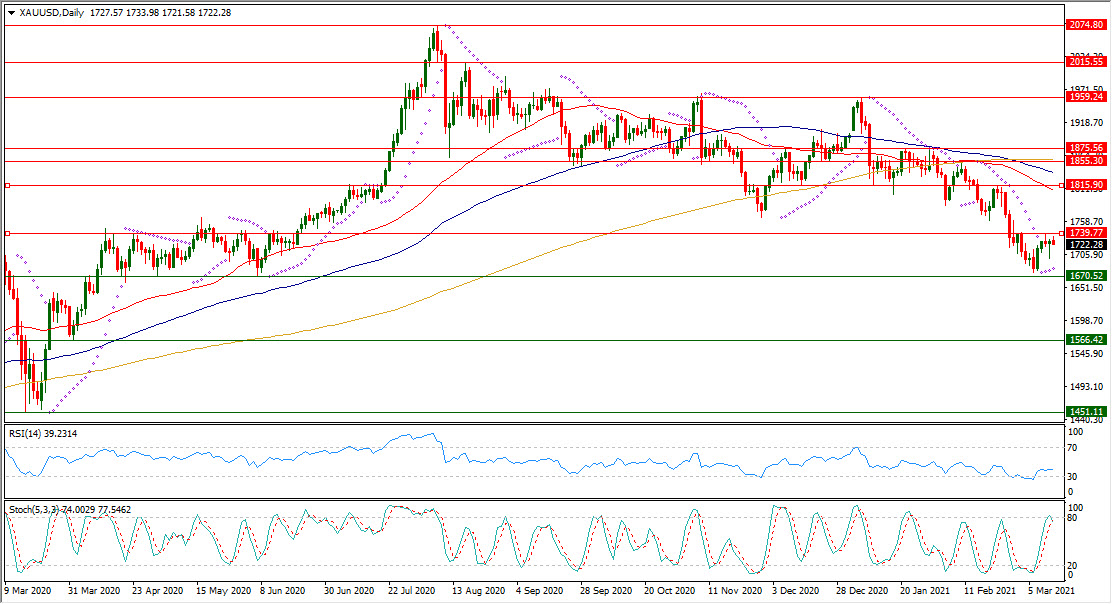 XAUUSD could extend its rebounding which started last Friday from $1700 area to reach to $1733.99 per ounce in the beginning hours of this week.
But it lost momentum again to be trading currently near $1725 per ounce without surpassing last week peak at $1739.77.
But reaching this peak drove Parabolic SAR (step 0.02, maximum 0.2) upside down and XAUUSD is trading now in its fourth consecutive day above its daily Parabolic SAR (step 0.02, maximum 0.2) which is reading today $1682.60.
The Gold is still well below its daily SMA50, its daily SMA100 and also its daily SMA200 since forming another lower high at $1855.30 on last Feb. 10