Island Reversal Pattern
Island reversals are strong short-term trend reversal signals. They are identified by a gap between a reversal candlestick and two candles on either side of it. Here is a bullish example. The price is moving down, gaps lower, then gaps up and continues higher. 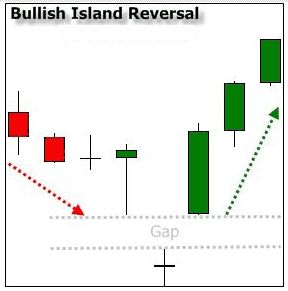 Here is a bearish example of the same pattern. 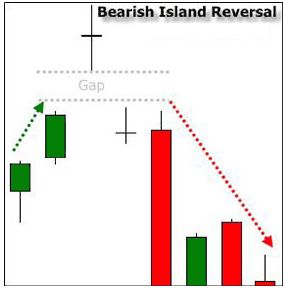 Exit: An exit refers to both the target and stop-loss. With this pattern, you want to capture the thrust in price that follows that pattern, but once that thrust starts to weaken, it is time to get out. If the price moves back to fill the gap, then the reversal pattern is invalidated, and you should exit right away. Therefore, a stop-loss can be placed in the gap or near the “island” candle.

Hook Reversal Pattern
Hook reversals are short- to medium-term reversal patterns. They are identified by a higher low and a lower high compared with the previous day. Here are bullish and bearish examples of the patterns. 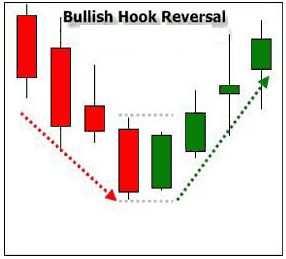 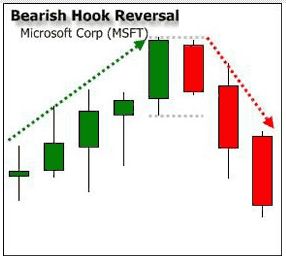 Entry: On the bullish pattern, there is a downtrend, followed by two up days. The first or second up day breaks the high of the last down day. It is the second up day when a long trade should be taken, as the pattern indicates that the price could continue to rally. For the bearish pattern, there is an uptrend, followed by two down days, and either the first or second down day breaks the low of the last up day. It is the second down day on which a short trade should be taken, as the pattern indicates the price could slide lower.

Exit: Know your exit points before trading this pattern. In most cases, you will see a sharp reversal, as shown in the chart above. Anything to the contrary indicates that the pattern is not working, so exit immediately. Therefore, a stop-loss can be placed above the recent high for a bearish pattern, or below the recent low for the bullish pattern. We can’t know how long the reversal will last based on the pattern alone. Therefore, maintain the trade for as long as the price is moving in the expected direction. When the move weakens or a pattern in the opposite direction occurs, take your profit.

San-Ku (Three Gaps) Pattern
The San-ku pattern is an anticipatory trend reversal signal. The pattern does not indicate an exact point of reversal. Rather, it indicates that a reversal is likely to occur in the near future. The pattern is created by three trading sessions in a row with gaps in between. While each candle doesn’t necessarily have to be large, usually at least two or three of the candles are.

Here is a three gaps pattern that signalled the end of an uptrend. The price is accelerating higher. There are three gaps higher in a row. Since such momentum can’t last forever, the buyers are eventually exhausted and price moves the other way. 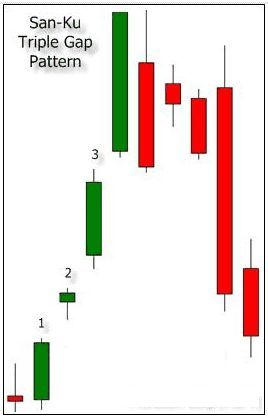 Entry: This pattern operates on the premise that the price is likely to retreat after a sharp move because traders will start taking profits. For additional evidence of the possibility of a reversal, look for extremes in the relative strength index (RSI) or await a crossover of the moving average convergence divergence (MACD).

Exit: This pattern anticipates a reversal. If it doesn’t happen, get out of any trade that was taken because of this pattern. Price must follow through in the anticipated direction in order for the signal to be valid. Stop-loss orders can be placed above the high of the pattern if going short. Ride the downward momentum while it lasts. Since it is unknown how long the sell-off will last, take profits when you see a reversal signal in the opposite direction or when the selling momentum slows.

Kicker Pattern
The kicker pattern is one of the strongest and most reliable candlestick patterns. It is characterized by a very sharp reversal in price during the span of two candlesticks. In this example, the price is moving lower, and then the trend is reversed by a gap and large candle in the opposite direction. The first large green candle is the kicker candle. The second strong green candle shows the follow through of the powerful pattern and helps confirm that a reversal is in place.

Entry: This kind of price action tells you that one group of traders has overpowered the other and that a new trend is being established. Ideally, you should look for a gap between the first and second candles, along with high volume. Enter near the close of the kicker candle (first green candle in chart above) or near the open of the second candle.

Exit: Place a stop-loss below the low of the kicker candle. Because kicker candles can be so large, this may mean your stop-loss is a sizable distance away from your entry point. As for a target, this pattern often results in a strong trend change, which means that traders can ride the momentum of the kicker for a short-term trade, or even potentially a medium-term one, as the price could continue in the direction for some time.

Why These Patterns Work
All of these patterns are characterized by the price moving one way, and then candles in the opposite direction appear that significantly thrust into the prior trend. Such occurrences rattle the traders who were betting on the prior trend continuing, often forcing them out of their positions as their stop-loss levels are hit. This helps fuel a continued move in the new direction. This idea comes from a simpler candlestick concept called thrusting lines. For example, if there is an uptrend, if a down candle forms but stays within the upper half of the last upward candle, little damage is done to the trend. But if the down candle moves more than halfway down the last upward candle, then more than half the people who bought during that upward day are in a losing position, and that could lead to further selling.

All that said, attempting to trade reversals can be risky in any situation because you are trading against the prevailing trend. Keep the larger picture in mind. For example, during a strong multi-year uptrend, a reversal signal may indicate only a few days of selling before the bigger uptrend starts up again.

In Summary
These advanced candlesticks are associated with strong price moves, and often gaps, which cause sharp shifts in direction. Traders can participate by noticing these patterns and acting quickly to get in as the price moves in the new direction. Candlestick patterns do not have price targets, which means traders shouldn’t get greedy. Ride the momentum for as long as it lasts, but get out if signs of trouble occur. Utilize stop-loss orders or a trailing stop-loss.

Justin Kuepper can be contacted at InternationInvest

Justin Kuepper
Justin Kuepper has over 15 years of experience in the market as a private investor and financial journalist.He spent several years building and managi...
View thread
You must log in or register to reply here.