What is Indicator Divergence?
Indicator divergence is when an oscillator or momentum indicator, such as the Moving Average Convergence Divergence (MACD) indicator, doesn’t confirm the movement of price. For example, a stock price makes a new high while the MACD or RSI indictor makes a lower high. 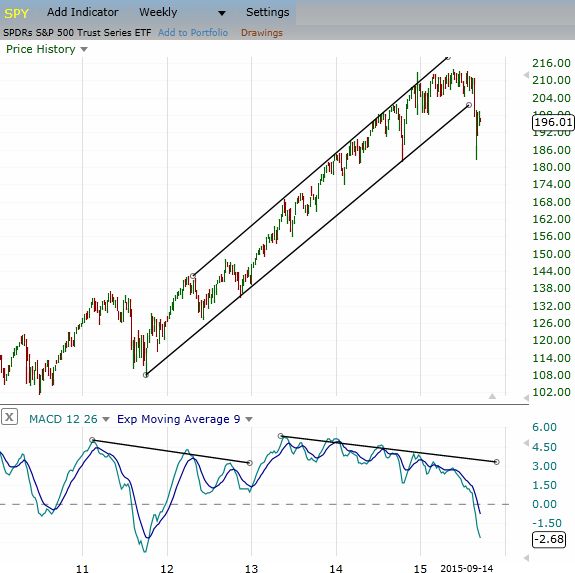 Figure 1 shows an example of divergence during an uptrend. The price continues to trend higher, but the MACD on several occasions does not make new highs, and instead creates lower highs.

Indicator divergence is meant to show that momentum is waning during a trend, and therefore more susceptible to a reversal. Divergence is not good at timing when a reversal will occur though, as figure 1 shows. As early as 2012, divergence was present on the chart, even though the uptrend continued into 2015, with significant pullbacks in late 2014 and 2015. This is bearish divergence, when the indicator is making lower highs while the price is making higher swing highs. 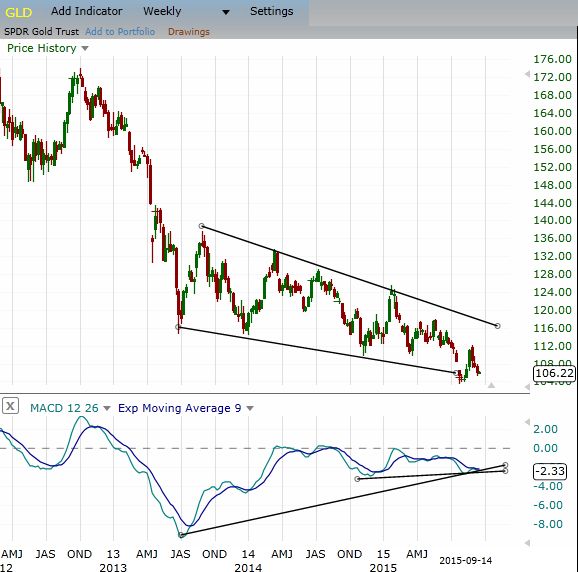 Common Problems with MACD Divergence
The two main problems with divergence is that it often signals a (possible) reversal but no actual reversal occurs – a false positive. The other problem is that divergence doesn’t forecast all reversals. In other words, it predicts too many reversals which don’t occur, and not enough real price reversals.

We’ll cover how to handle these problems in the next section. First, here are two common causes of false positives – divergence that almost always occurs in certain situations, but won’t necessarily lead to a reversal.

Divergence will always occur when there’s a sharp (big movement in a short amount of time) move followed by less sharp movement. This is actually what divergence is meant to capture, as many traders believe that if price movement slows down it’s poised for a reversal.

Figure 3 shows a stock gapping higher and then accelerating to the upside. This rapid and large price move causes the MACD to jump, and since the price can’t continue to keep gapping higher, divergence occurs. The divergence in this case doesn’t indicate a reversal, just that the price movement is slower than the price movement (gap higher) that caused the indicator to jump. The gap caused an unusual jump in the indicator, so as the price returns to more “normal” behavior, divergence occurs. Each price wave of a trend is different, and not all price waves will move rapidly in a very short amount of time. In this case, the jump in price was followed by a slower price rise, resulting in a declining MACD reading, but not a reversal. 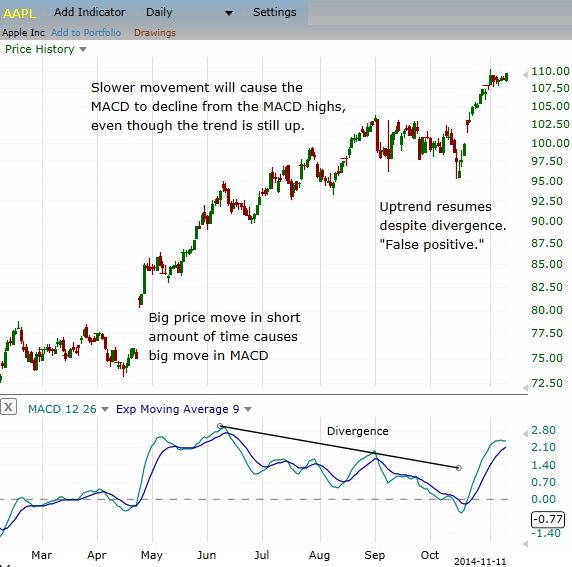 After a sharp price move the price movement that follows will almost always be slower (covering less distance or covering it in a shorter amount of time), even though the trend may still be in effect.

“False positive” divergence also often occurs when the price moves sideways, such as in a range or triangle pattern following a trend. As discussed prior, a slow down (sideways movement or slow trending movement) in the price will cause the MACD to pull away from its prior extremes, and gravitate toward the zero line. 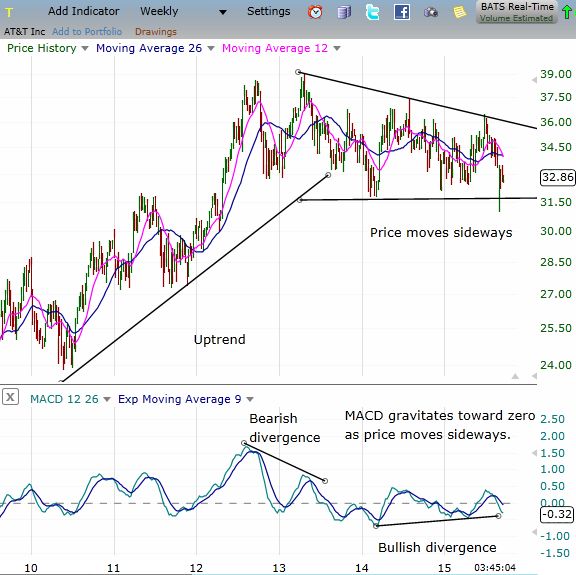 Having discussed some of the potential problems with the MACD, and what to watch for, here are some ways to improve on MACD divergence using price action analysis as well.

Always Utilize Price Action with Divergence
Price is the ultimate indicator, with momentum indicators simply manipulating price data. Use price action to aid decision-making when using the MACD. Here are some basic guidelines for doing so:

Even with these guidelines, divergence may provide beneficial insight on some trades, but not others. It’s a tool that may aid trading but is not perfect. Understanding the weaknesses, and helping to compensate by also analyzing price action, is required.

In Summary
Using indicators and/or divergence isn’t a bad thing. Divergence shows the price is losing momentum relative to prior price swings, but that doesn’t necessarily indicate a price reversal. Divergence also doesn’t need to be present for the trend to reverse. Divergence almost always occurs when the price makes a sharp move in the trending direction and then moves sideways or continues to trend but at a slower pace. A sharp move followed by a consolidation is often a sign of trend strength, not a reversal as MACD divergence would suggest.

When using divergence, understand what causes it, so that you can avoid some of the problems with indicator divergence. Analyze price action as well; slowdowns in a trend are visible without the use of the indicator, as are price reversals. If using divergence, test its validity for aiding your entry and exit points over a several-month period to assess whether divergence improves your performance or not.

Cory Mitchell
Cory Mitchell began trading in 2005.  He has a degree in business, the Chartered Market Technician (CMT) designation, is a member of the Market T...
View thread
You must log in or register to reply here.