The latest bullish meme floating around Wall Street is that President Donald Trump is going to unleash a new era of big fiscal spending. As a result, lackluster U.S. economic growth is going to finally accelerate to the upside. Inflation is going to pick up. In a nutshell, this is the narrative which has triggered a huge rip higher in the U.S. stock market.

Be careful accepting that bullish narrative as gospel.

Take a look at history – it offers investors some interesting perspective. In particular, the post-election market between 1980 and 1982. On November 4, 1980, Ronald Reagan was elected president. The country appeared to be riding high. 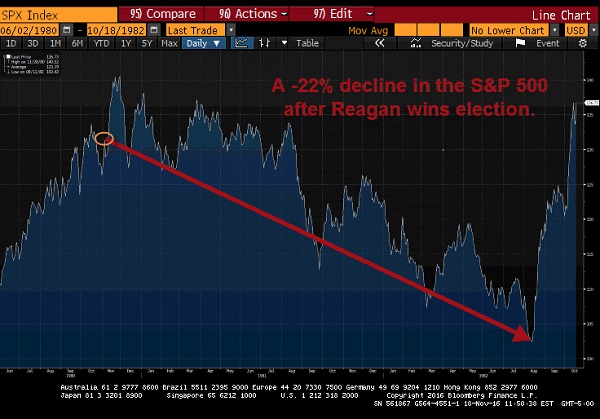 The stock market rallied – big. In fact, the S&P 500 jumped 7% from the day of Reagan’s victory to the end of November. The market top was in.

Of course, the Reagan administration had its hands full with a serious recession. Stocks fell 22% from the day of Reagan’s presidential win to the August 1982 recession low. When stocks fall over 20% that’s considered a crash.

To be clear, we are not suggesting stocks are headed for a 1980-style crash. What we are suggesting is that Wall Street exuberance may have gotten ahead of itself, similar to Reagan, since Trump won the election.

The economic picture in the early 1980s obviously differs from where we are today. The Federal Reserve was in the process of raising interest rates to historic levels in an effort to fight runaway inflation. The unemployment rate was creeping up. Today, rates are at historic lows and inflation is just beginning to picking up again. Unemployment has been falling since 2009.

In short, Reagan brought out the deficit-spending bazooka to stem the bleeding. Trump is bringing out big fiscal spending to steady U.S. growth and “Make America Great Again.”

No matter what you may think about that, investors believe him. Since November 4th:

Respect those moves. If you missed it, don’t complain. If you nailed it, congratulations. None of that matters now.

On that front, I’ve got more questions than answers:

What I can say is that after almost two decades in this business, I’ve learned a number of important lessons. One of them is that it’s okay to admit and say, “I don’t know.” There’s nothing wrong in acknowledging uncertainty the road ahead. In other words, embrace the uncertainty.

If the Reagan history lesson teaches us nothing else, it’s that Wall Street can always sell a reason to buy the stock market. Maybe they’re right this time. Maybe Trump really is the panacea to “Make America (& the Stock Market) Great Again.”

I’m not convinced just yet.

Rest assured that my team of analysts and I are on it. We are measuring and mapping the economy like we have always done. Our Q4 GDP tracker is currently at 1.7% year-over-year growth. Not bad. But not making America great, yet.

While we wait for some answers, I encourage you to keep your powder dry. Hold a significant amount cash in your portfolio. Whichever way the market turns, you’ll be ready. I know I am.

Keith McCullough can be contacted at HEDGEYE Keith McCullough is the CEO of Hedgeye Risk Management. Prior to founding Hedgeye Risk Management (formerly known as Research Edge), Keith built a 10-year background of managing money at The Carlyle Group’s hedge fund, Magnetar Capital, Falconhenge Partners, and Dawson-Herman Capital Management. Keith got his start as an institutional equity sales analyst at Credit Suisse First Boston after earning his Bachelor of Arts in Economics fromYaleUniversity, where he captained the Yale Varsity Hockey Team to a Division I Ivy League Championship. Keith is also a Contributing Editor to Bloomberg Television as well as Investopedia.com

That was an excellent article, keith! Actually, <span>Even some market bulls are starting to get nervous about the stock rally.</span>
D

I heard about the stock rally that happened in Wall Street. Did you guys heard of the Trump Bump? Do you think the rally’s a good thing? How long do you think it will last?
You must log in or register to reply here.

Shares, crypto, or NFTs: which is the best investment option?