Over the last few weeks there I have noticed much confusion in the air regarding the state of the current financial markets and with so much political and economical news in the air, it’s far from surprising to hear the questions coming.

Anyone with a little experience in the world of currency trading is familiar with the impact that Central Bank Interest rates have on currency prices, and we are told to pay as much attention to this as possible so as to keep informed on all factors shaping exchange rates across the board. When reading about anything to do with FX and interest rates, you will find commentary on one aspect called the Carry Trade which is something I have been getting many questions about lately. It is a very important aspect of Forex and can be hugely helpful in analysis if you know what to look for, so let’s take a deeper dive into it.

The Carry Trade has typically been a trading strategy used by major investors and institutions to greatly increase the rate of return or yield which they are getting on their money. As we know, Central Banks around the globe have the power to change their interest rates regularly through economic policy. The higher the rate are, the more attractive the currency is to the outside investors. The lower those rates are, the less likely people are to hold their money in that currency. The difference between worldwide rates is dependent on the policies of the Central Banks themselves and varies from nation to nation, with some being much higher or lower than others at any given time. So how would an investor take advantage of this?

A good example would be to focus on a currency like the Japanese Yen. Traditionally, the Yen has held lower rates than most other currencies, mainly since the Japanese Bank wants to maintain a cheaper currency which in turn means that it is more affordable for other nations to buy Japanese exports. As we know,Japanis built on exports so a weaker Yen works nicely in their favor. Due to these factors, the Carry Trade evolved into a strategy where investors could borrow one currency with a low rate attached to it, like the Yen and then sell to buy or invest in another higher yielding currency like the British Pound, Euro and even the USD itself.

As a result of the carry, we would see long term trends develop over the years as more people would borrow and sell Yen to buy stronger currencies and get paid what we call the rate differential. As well as recovering this differential, the investor would also gain from the change in rates. Here is an example of the carry trade in full working order on the GBPJPY between 2004 and late 2007: 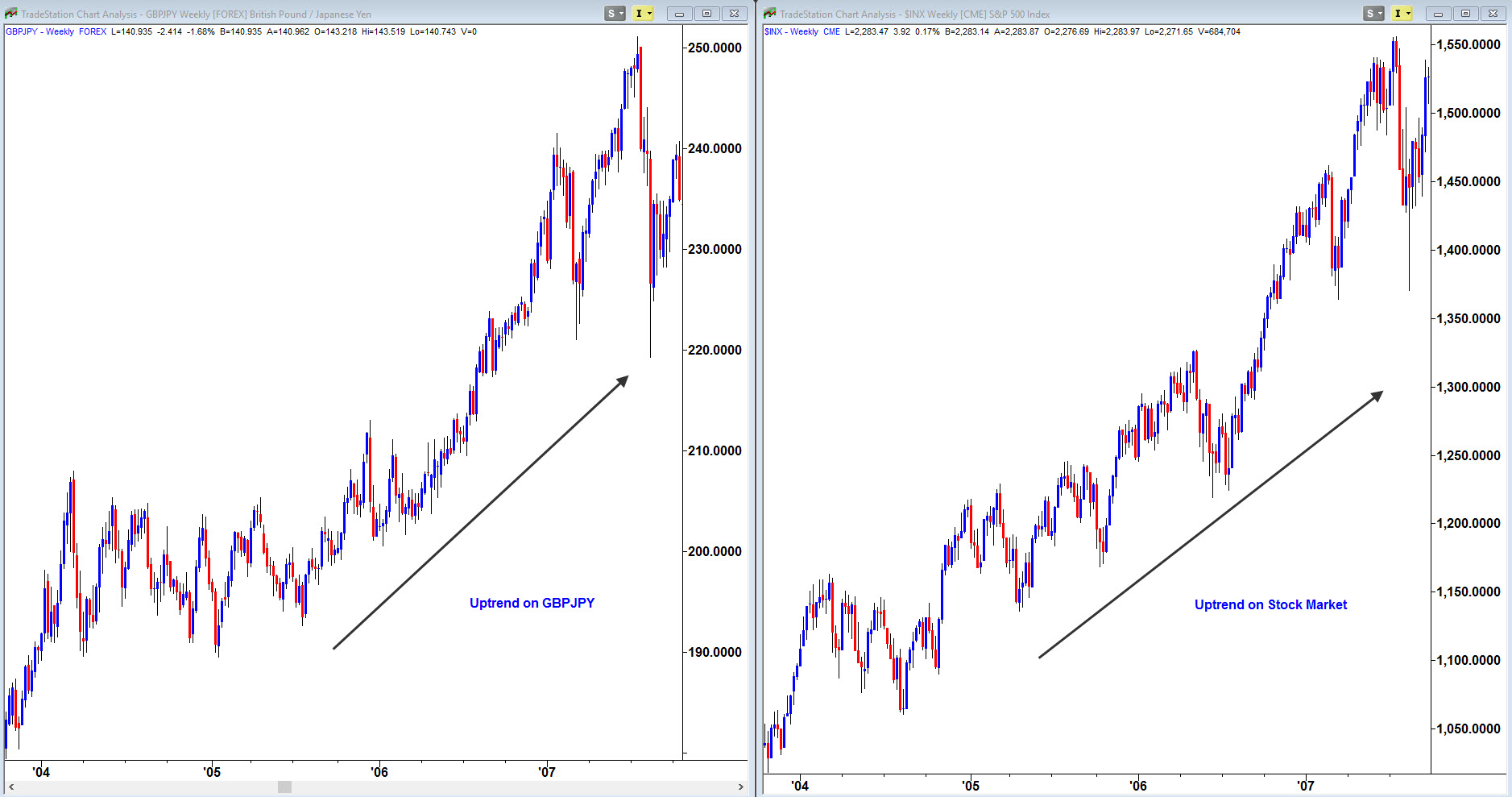 Do you notice how the trend of GBPJPY is in the same direction as the S&P 500 Index? When things are doing well in global markets, investors tend to build up a higher appetite for risk and are happy to use their profits to attempt strategies like the carry trade. At the time, rates in theUKwere above 6%, way more than inJapanwhere they were below 1%. That is a free 5% you would have been receiving, along with the major gain in pips. However, as we saw when the Credit Crunch reared its ugly head in 2008, all good things come to an end and the carry trade unwound in spectacular fashion: 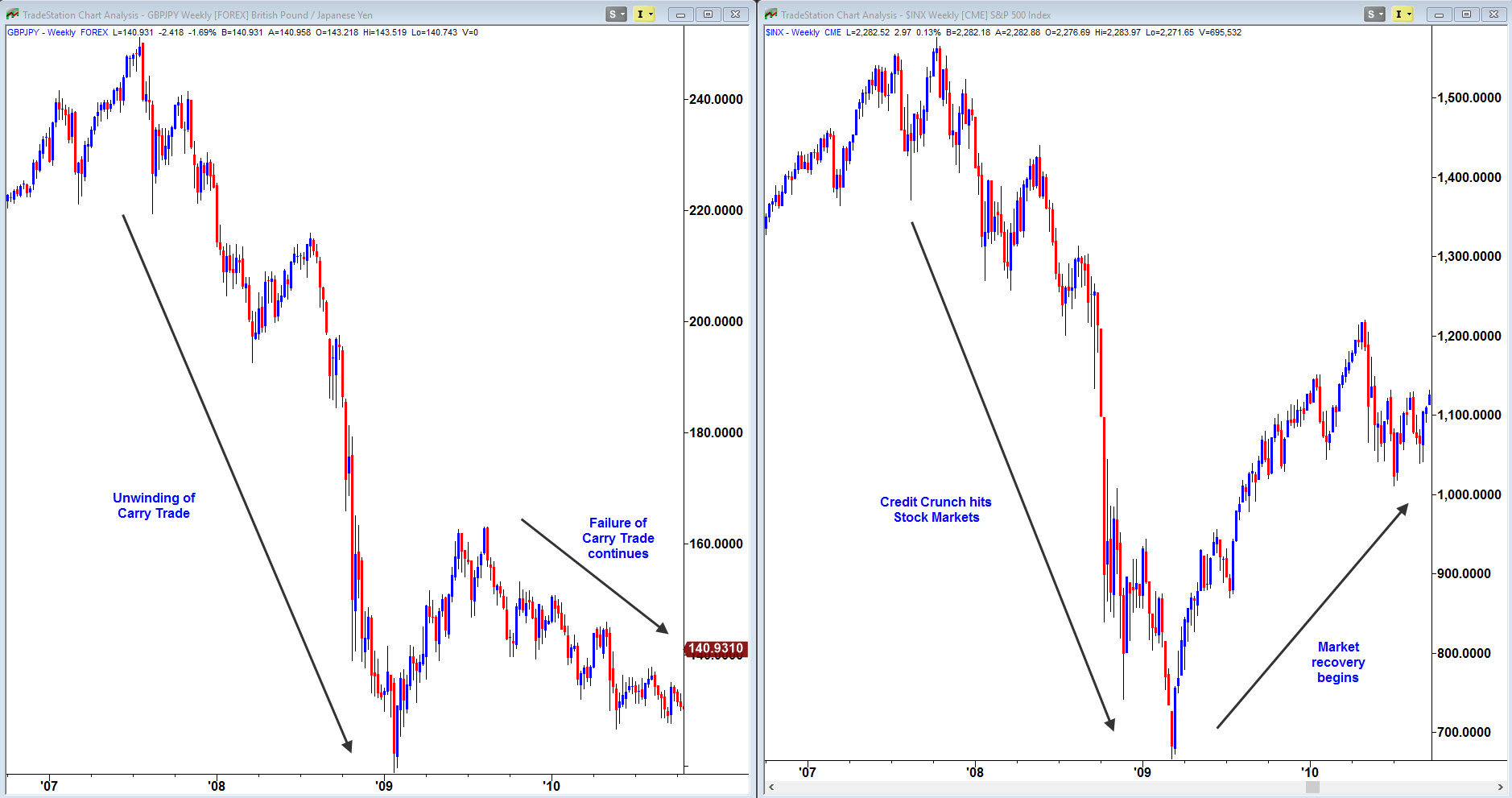 Up until 2009, both charts are practically in perfect sync, but the “flight to quality” by nervous traders and investors who were closing their positions and going back to cash caused a shift and we see the collapse in both Stocks and the GBPJPY. As you can see, overall market sentiment will change very quickly, sharply adjusting the supply and demand for markets in the blink of an eye.

A keen eye will notice a unique change in the dynamic of the carry trade when looking at the charts above. While both markets enjoyed a dual recovery in 2009, things tailed off by 2010 for the GBPJPY which continued its downward descent, yet the Stock Markets continued to rally without pause. The reason why is simple: in reaction to the financial crisis, Central Banks across the board lowered rates thus eradicating the carry trade dynamic completely, so when things bounced back in stocks, investors didn’t see the same opportunities in FX.

However, there was still a bit of room for the carry trade to work but to a lesser degree, this time with the rare few nations who did raise rates over the last few years, namelyAustraliaandNew Zealand. Looking at the time of writing this article,New Zealandhas the highest rates of the major currencies at 1.75% though it was a little higher than that over the last few years with highs of 3.5% in 2014-2015 and lowering consistently since then.

What does this look like on a chart then? It seems the Carry Trade was not completely dead and buried after all when looking at NZDJPY: 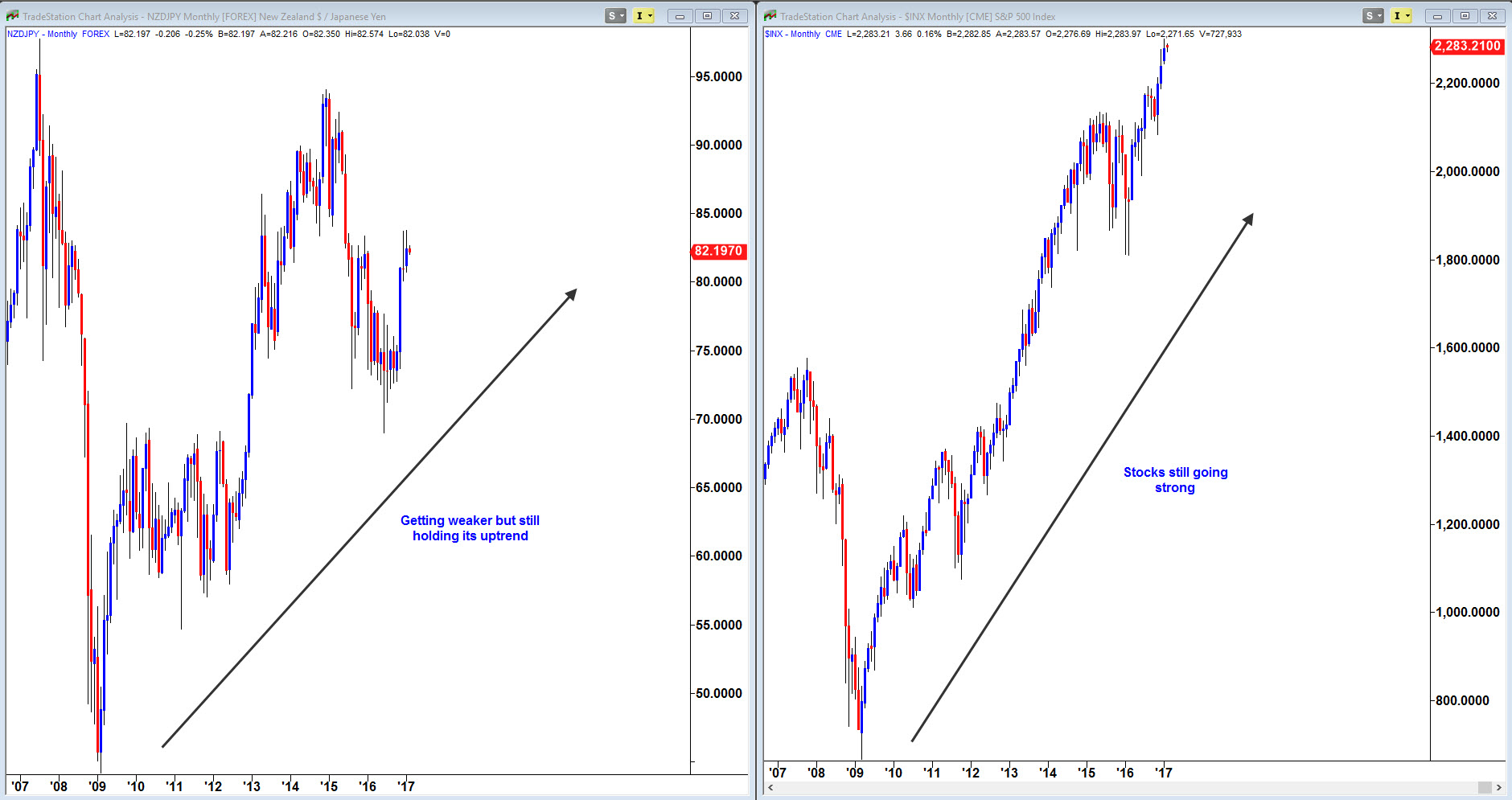 Now, while I would agree that the correlation of the two markets is not as strong as it was with GBPJPY, it is still there. What has my attention for the long-term perspective is that the S&P 500 is still grinding higher, yet the NZDJPY is struggling to maintain the momentum. Maybe a sign that the smart money is not as trusting of the new equity market highs as much of the media is? All I know is that I will personally be keeping an eye on this currency pair in the coming months as I would expect much available downside opportunity if or when stocks do decide to correct. There is still a Carry Trade out there guys, you just have to look a little harder to find it these days.

Sam Evans can be contacted on this link:  Sam Evans

Sam Evans
Sam originally worked in radio as well as the record and film industry including the role of an Executive Producer. He then studied to become a Life C...
View thread
You must log in or register to reply here.

Is investing in the forex market risky?