Does China matter? That’s a popular question throughout the investment community right now. The answer, however, is relatively simple: yes. Simple numbers can prove this point.

Earnings Performance
According to FactSet, U.S. companies that generate more than 50% of their revenue from overseas have seen a collective earnings decline of 11.2% for the fourth quarter. U.S. companies that generate at least 50% of their revenue domestically, meanwhile, have seen their collective earnings increase 2.7% in the fourth quarter. Overseas revenue doesn’t mean China only, but as the second-largest economy in the world with a massive population China, has the biggest impact. Unfortunately, the following words and phrases are currently associated with China: deceleration, bank fraud, overbuilt, overleveraged and market manipulation.

Let’s be realistic here. The odds of China fixing all its problems and turning everything around on a sustainable basis are extremely low, at least for the next several years. Over the long haul, China’s economy should rebound, but U.S. companies with a lot of exposure to China might take a significant hit between now and the end of the decade. Actually, that’s already happening.

Big Picture Numbers
The Organization for Economic Cooperation and Development recently released the following statement: “Global growth prospects have practically flat-lined.” This pertains to China, Japan, Europe, Latin America and the United States. China’s economy is in tatters. Japan is in, and has been stuck in, deflation. Europe’s growth is anaemic and would be in deflation without central bank intervention and the list of Latin American countries in recession is slowly but surely growing.

In the United States, fourth-quarter earnings to date are down 3.6%, which is the worst quarterly performance since 2009. Furthermore, out of almost 100 companies that offered guidance for the first-quarter, 80% of them warned of weaker earnings. Deere & Co. (DE), Caterpillar Inc. (CAT), Wal-Mart Stores Inc. (WMT) and Exxon Mobil Corporation (XOM) recently mentioned that exposure to China was having a negative impact on performance.

Exxon Mobil: “Global economic growth continued to slow during the fourth quarter across nearly all major economies. In the U.S., estimates show growth softening since the third quarter.”

Wal-Mart: “We have faced specific challenges in our largest e-commerce markets outside the U.S.” And: “Economic softness in Brazil and China continued to weigh on growth.”

Prior to 2000, the United States economy was larger than all emerging markets combined. Today, emerging markets as a whole are larger than the United States, which means that even if the U.S. was performing well, it wouldn’t be enough to pull the rest of the world out of the mire. It should be obvious by this point that China matters. If you still have your doubts, then consider that many companies with exposure to China – which go way beyond the short list above – will have to cut costs in order to deliver on the bottom line. This means these domestic companies will have to slash salaries and reduce headcount. When this happens, it will lead to lower consumer spending. Once that takes place, prices will be reduced in order to drive demand. As you can see, this is a downward spiral. While China certainly isn’t the only factor, it plays a role.

If you would like to know what companies have the most exposure to China, you will find the answer below.

China Exposure
We all already know that Deere, Caterpillar, Wal-Mart and Exxon Mobil have plenty of exposure to China, but they’re not alone. The list below includes what companies have the most exposure to China, as well as how their stocks have performed over the past year. Negative performance is indicated in parentheses. 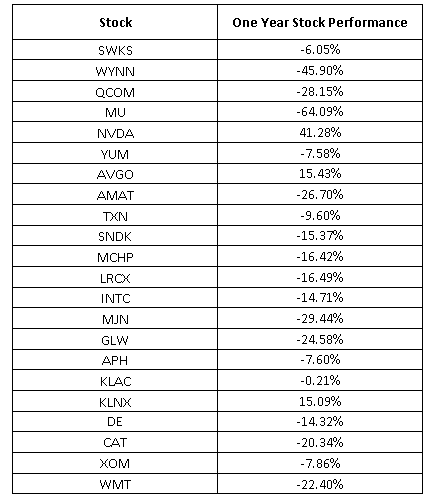 In Summary
China’s economy is currently unhealthy and will need to go through a long phase of detox in order to improve, which it should. In the meantime, investments with exposure to China could pose significant risks. Consider this a starting point for your own research. 14,617 1,581
Don't underestimate our competitors imho.
They are good. Very good and improving.
You must log in or register to reply here.

Article How Does Google Make Money?