Many investors find volatile – fast moving markets to be very unsettling, but low volatility – sideways markets can be equally frustrating because while risk could be lower, the potential for profit is probably reduced as well because option premiums are lower during these periods.

Here I’ll discuss a few strategies that I believe may be better suited for a low volatility – sideways moving market:

Out-of-the-money (OOTM) Covered Calls
If you already own a stock and it is worth at least as much as you originally paid for it, covered calls can be a great way to generate income. If you sell out-of-the-money calls and the stock remains flat, declines or even increases a little, the options will likely expire worthless and you’ll keep the premium you received when you sold them, with no further obligation.

If the stock is above the strike price on the expiration date of the option, your stock will be called away at the strike price either prior to, or at expiration. If you sold out-of-the-money calls, this will result in an overall net profit.

Assume you own 1,000 shares of XYZ stock @ 72, and you sell 10 XYZ Apr 75 calls @ 2. Because you bring in 2 points for the covered calls, you will not have a loss unless the stock drops below 70 and if the options expire worthless, you get to keep the $2000 received when the options were sold.

When you sell OOTM calls, the options will initially have a greater than 50% chance of expiring worthless. The farther OOTM they are, the greater the chance that your stock will not be called away.

In this example the breakeven price is 70, and the profit is capped at $5,000 for all prices above 75. If the stock drops more than 2 points losses will be incurred below 70, all the way down to a price of zero. The losses will always be $2,000 less than if you had not sold the calls at all, but could be as much as $70,000 if the stock drops to zero 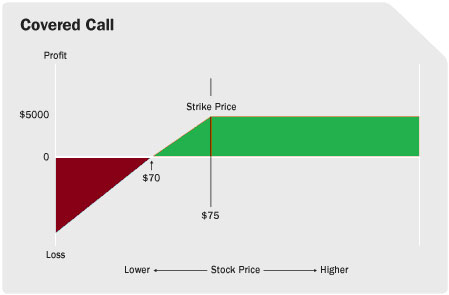 Out-of-the-money (OOTM) Cash Secured Equity Puts (CSEPs)
Many investors think of selling CSEPs as a way to specify a price you’re willing to pay for a stock you would like to own; sort of like getting “paid” to enter a limit order. When you sell a CSEP, you get moderate downside protection and a slightly lower break-even price compared to simply buying a stock outright. CSEPs can also be used to generate moderate amounts of income when the market seems like it isn’t going anywhere.

CSEPs are typically sold at a strike price that is below the stock’s current price, which means the option initially has a greater than 50% likelihood of expiring worthless, Similar to the covered call example, the farther out-of-the-money, the lower the likelihood of assignment.

A CSEP generates income immediately, but it also requires a cash deposit equal to the amount of the potential assignment, in the event the stock shares are assigned or “put” to you.

Once the puts are sold, if the stock remains relatively flat or declines, the puts will likely expire worthless.

Since there is no way to guarantee you won’t be assigned, you should always ask yourself, “Would I be happy if I had to buy the underlying stock at the strike price on this option?” If you can answer yes, then writing a CSEP is a strategy to consider; but only consider a CSEP on a stock you’d be happy to own, but just as happy not to own. If you do get assigned, you’ll take on all the normal risks of stock ownership.

Assume you like XYZ and would consider buying 1,000 shares below $70, but you think the current price of $72 is a little too high. You decide to sell 10 XYZ March 70 puts @ 2. Doing so requires a deposit of $68,000 in your account; the difference between the potential assignment obligation of $70,000 and the $2,000 received on the sale of the puts. This money is held as a security deposit similar to an escrow account.

If the stock is below $70 at expiration, you would be assigned 1,000 shares @ 70. This usually happens at expiration, but could actually happen at any time. You won’t have an immediate loss unless the stock has dropped below $68, but you have risk all the way down to zero. 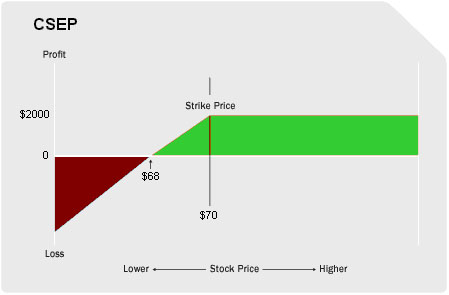 If the stock does not drop below $70, the puts will expire worthless and you’ll retain the $2,000 received when the puts were sold, with no further obligation.

Out-of-the-money (OOTM) Protective Puts
Protective puts are often thought of as a kind of insurance policy. If you own a stock that you’re concerned might trend down in the short term but that you believe has favorable long-term prospects, protective puts often become especially affordable during times of low volatility.

If you buy 10 XYZ June put options with a strike price of 70, at a price of $2 (total cost $2000), you could exercise your puts at any time prior to expiration to sell your stock at $70; 20 points above the current market price.

When you have long option contracts, you are never required to exercise them; you could choose to sell them instead. If you sell your puts, you would sustain the 22-point loss on the stock, but you could offset most of that loss by selling the puts at their appreciated value.

If the stock was at $50 at the June expiration, your put options would have an intrinsic value of 20. Selling them at or near that price would bring in approximately $20,000 ($20 per contract x 10 contracts x 100 shares per contract), which would offset all but 2 points ($2000) of the decline in the stock.

If XYZ is above $70 by the June expiration, your puts would expire worthless and the $2,000 you paid for the puts would be lost. 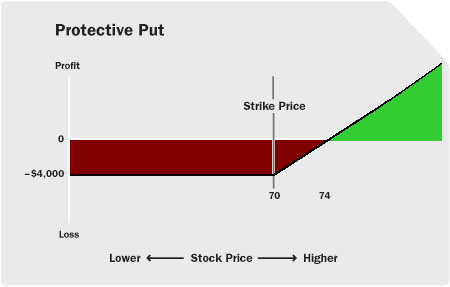 Having the choice of whether to sell your stock position or maintain it, is a key benefit of protective puts, unlike some other hedging strategies that do not utilize options.

Randy Frederick can be contacted at Schwab Center for Financial Research Randy Frederick is Managing Director of Trading and Derivatives with the Schwab Center for Financial Research. He is one of the early architects of Schwab's option trading platforms and analytics tools. While he focuses primarily on public relations, client education and market analysis, he is frequently involved on matters of business development, product development and risk management. He has served on various corporate and industry committees including the FISD Executive Committee, the ISE Allocation Committee and the ISE Board of Directors.

Randy is a respected industry veteran with more than 25 years’ experience who writes blogs and educational articles for Schwab's website and client newsletters. He was the host of the weekly radio show "The OPTIONal Hour" on TFNN from 2005 – 2007 and he has been published in trade magazines such as Active Trader, Futures & Options Trader, SFO and Futures. He is a frequent guest on CNBC, Fox Business and Bloomberg TV, and his comments often appear in the financial news media including The Wall Street Journal, Barron's, the Financial Times, Bloomberg, Dow Jones, Reuters, USA Today, Forbes.com and TheStreet.com.

Randy Frederick
Randy Frederick is Managing Director of Trading and Derivatives with the Schwab Center for Financial Research. He is one of the early architects of Sc...
View thread
You must log in or register to reply here.

P
Newbie - Option Arbitrage or am I mistaken?

B
What happens if you follow Jim Cramer exactly: a multi-year study of Mad Money picks

B
Strategy: Buy the Dip with Montley Fool Recommendations